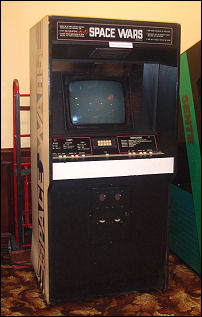 I missed the 2008 Oklahoma Video Game Exhibition due to perfectly ordinary domestic circumstances: there was just a collision of events that left me with no babysitter. As my son wasn’t quite one year old at the time, there was just no way I could tend to him and run any kind of display at the same time. OVGE 2008 was skipped, and when OVGE 2009 was announced, I pretty much signed up then and there. I was working on what I was going to bring to the show for quite some time in advance; I made the decision to postpone a book project I had in the works in favor of finishing up another DVD set (oddly enough, focused on another retrogaming convention) that would be more likely to sell at OVGE, and, still being out of work, I started to make quite a few hard choices about what was for sale. As it turns out, the list of things not for sale was far, far shorter than the list of things I was willing to sell. It was time to do some serious wheeling and dealing. I was pretty stressed about this in the run-up to the show itself. 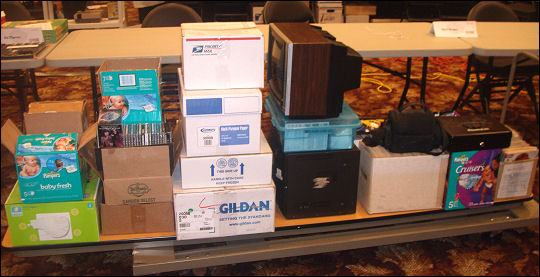 Of course, when Kent and I rolled a massive cart containing everything we’d brought with us into the show floor from the loading dock, and I saw a great big 1978 Space Wars machine sitting there working perfectly, that’s when I relaxed a bit and remembered that it’s all good fun too. 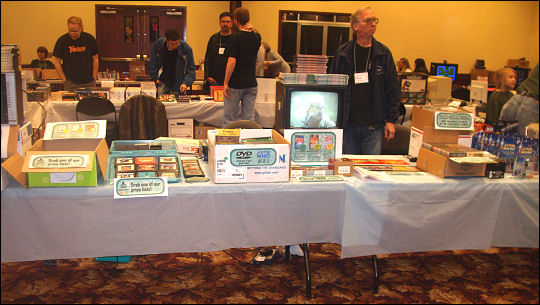 In an unusual break from my wild-eyed panic at these things, the Phosphor Dot Fossils booth was actually up and running and ready to do business before the doors opened to the public. 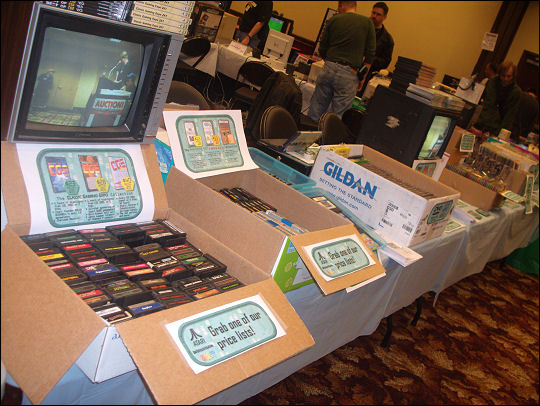 The best word for the PDF tables was: busy. Very busy. (I almost typed “busty” there, and I think that’s the only thing I could’ve added that might have brought in more business.) On Thursday I published my price list and posted it to various forums; I was startled by the sheer number of people – some of whom I had no idea who they were before or after they showed up at my table – asking for specific stuff on the list. At times I was doing well just to keep up with it all. 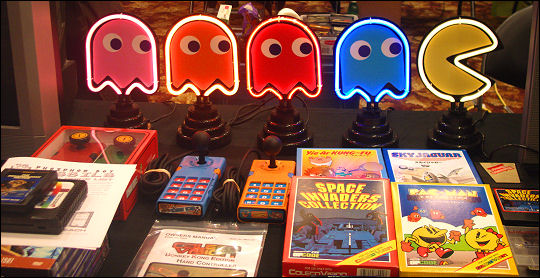 Not that all the action was at my table. Brad Prillwitz had a Pac-Man tournament, and while I was mightily impressed with his copy of Pac-Man Collection for the Colecovision (below), I was drooling with lust over these lights. 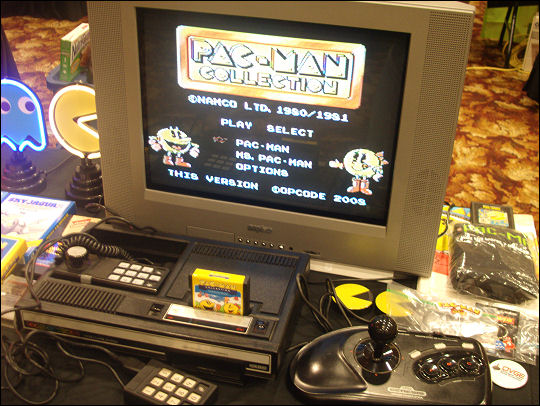 Author Brett Weiss had his new Classic Home Video Games book for sale too, and I made sure I grabbed one by the end of the show; this is a companion volume to his incredible all-encompassing volume covering the early years of the industry; this volume covers the NES (a huge library which takes up a lot of the book), Sega Master System and their contemporaries. Very highly recommended. 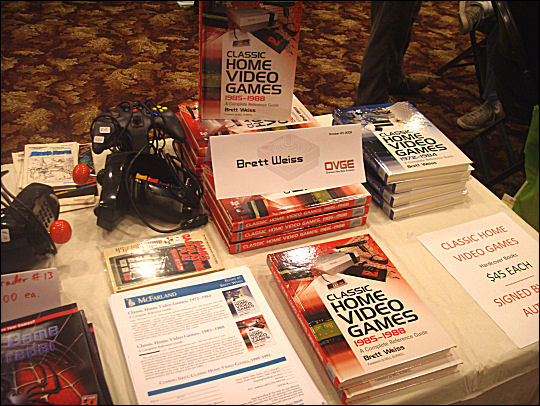 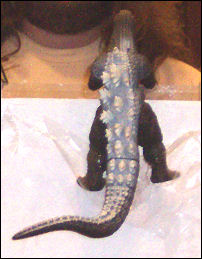 This was the Cortez family’s “Gamezilla!” display – a table centered around games and memorabilia that involve giant monsters crushing stuff. Paul “Pantechnicon” Cortez is a regular on several forums I frequent, but he was the first to admit that “Gamezilla!” was the brainchild of his son, who was on hand to show everyone how to crush, crumble, and/or stomp. His daughter was also there, dressed most appropriately for a video game convention (she was Yoshi!) and amazing me with her ability to make up for the lack of “show floor exits” in the dealer area by rolling under the tables to the other side. 😆

I also had a unique perspective on Godzilla himself from behind the tables! 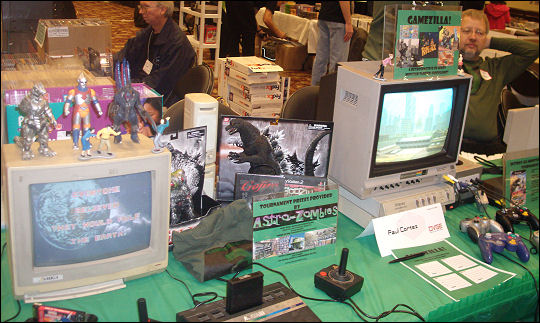 At times, the Godzilla tournament made for a packed house. 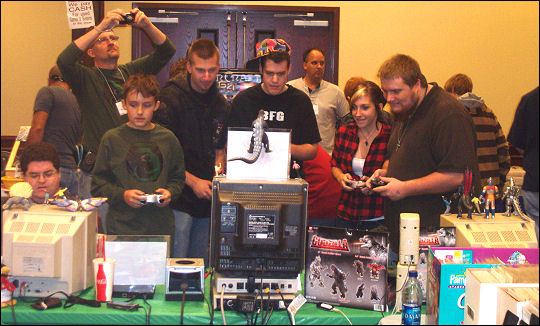 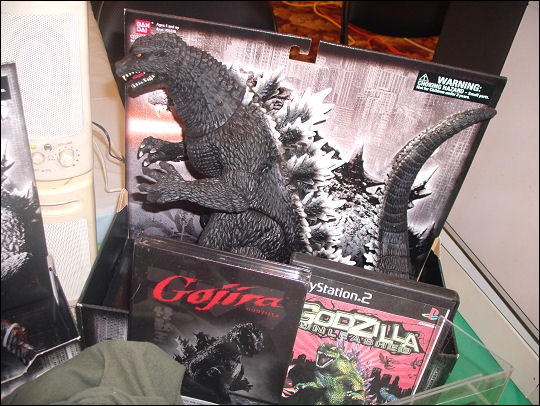 Paul took time out from helping introduce passers-by to the joys of stomping Tokyo to try out the Power Glove at a nearby table. 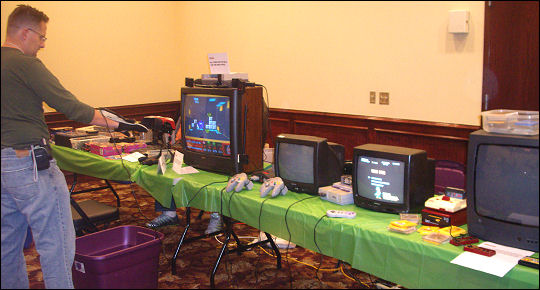 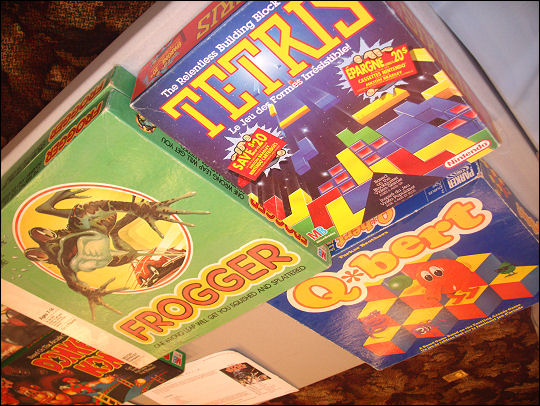 …along with some awesome hand-drawn sketches of various Transformers. 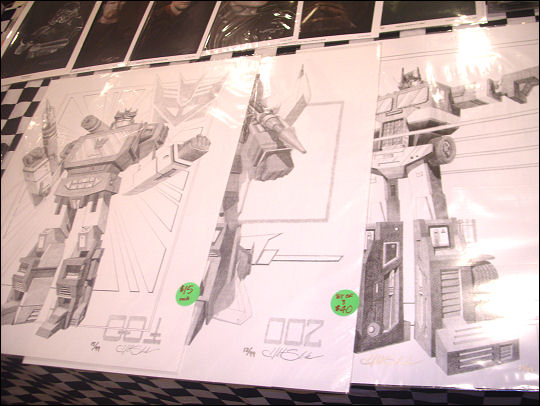 A Vectrex homebrew on display. 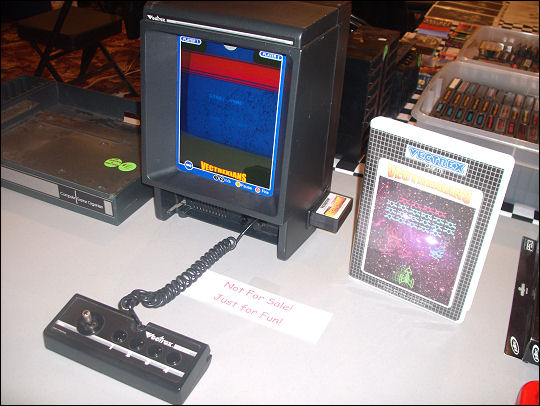 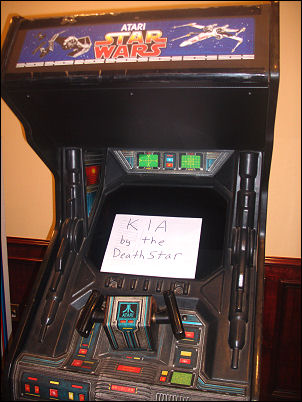 If there was a single drawback to the show, as much as I hate to single out any particular party… the live music show that ran from 10am well into the afternoon was, at times, deafening. I’ll put it this way: I had two TVs showing my DVD demo loop at my tables. I was no more than 4 feet away from either one of them, and they were turned up to a level that I hope was unobtrusive to my neighbors. When the live music was playing, I couldn’t hear either of my TVs, 4 feet on either side of me. Maybe he didn’t quite understand the requirements of the gig or something… I don’t think I ran into anyone who didn’t complain about how loud the music was. I’ve already seen on the OVGE thread at DP where the vendors on that side of the room said their business evaporated completely when the loud music started up. Eek. I think having the vendors there is much, much more important than having the music there. 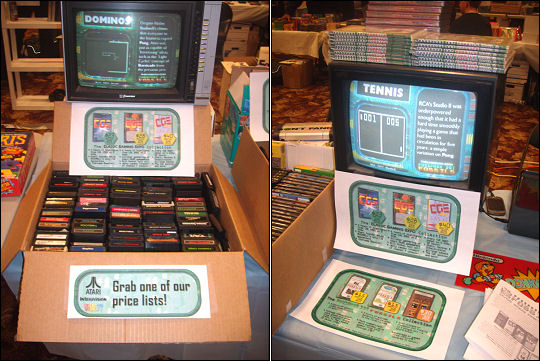 My only regret about my own setup is that I left very little room to display anything just for fun that wasn’t for sale – it was wall-to-wall stuff for sale, and yeah, maybe it was a bit cluttered. I was still very satisfied with my sales for the day.

Here you can see Kent hauling everything out of the showroom in one trip – what a guy! 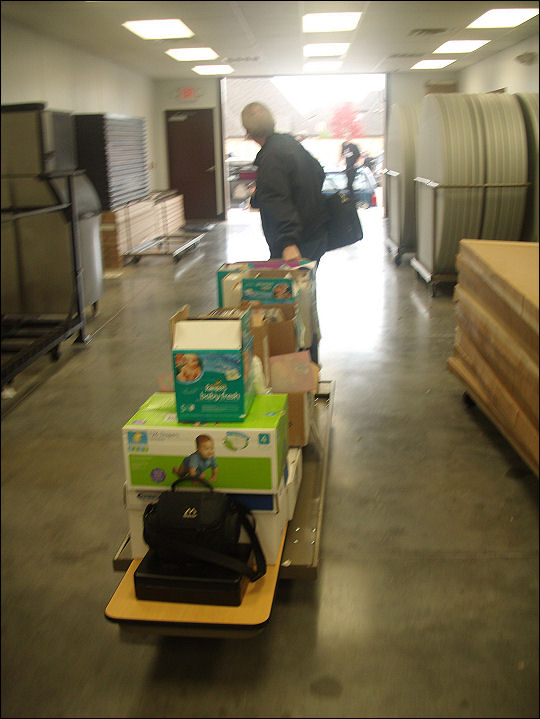 The drive home was uneventful other than a real-world demonstration of why they test cars’ ability to slalom (eek!), and the fact that when I got home, instead of going into my house to relax, I had to find a runaway cat outside after dark (also eek!).