The first Oklahoma Electronic Game Expo was held at Oklahoma City Community College – a place which, with everyone referring to the city as OKC, logic would seem to demand be abbreviated to OKCCC, but is instead referred to as OCCC, possibly by those with OCD – on Saturday, April 26th, 2008. The show’s organizer said that he was inspired by Tulsa’s OVGE gathering, and since that show was dormant in 2007, he decided to put on such a show at his college campus at home. OEGE was backed by the college’s Computer Arts & Technology Society (or CATS for short), which had a display showing off various elements of actual game designs being prepared by the students there, ranging from concept art to full renderings, level maps and so on. I understand that the plan was originally to have a much more elaborate display on behalf of the school’s game design courses, with at least semi-playable works in progress on display, but hardware issues intervened. Still, the stuff I saw in the CATS booth was enough to convince me that, if I lived in Oklahoma City and was the same age as most of the people on the show floor, I would probably be all over those courses. 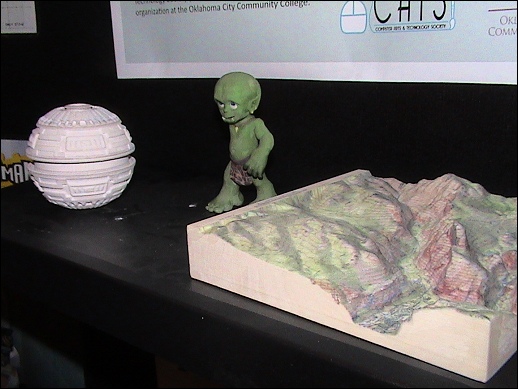 I laughed, I cried, it was better than CATS

The best way to describe OEGE’s attendance would probably be the words “thin crowd”. But that doesn’t just apply to the attendees – several sponsors didn’t show, including Coca-Cola and including some vendors who I’d seen in Tulsa before. Two OKC comics and collectibles stores were on hand, as well as representatives of the OKC Vintage Stock…and us. Situations like this can work out well, because I paid for a single table and wound up with a six-table island to myself, which I promptly all but carpeted with the DVDs I was selling (a fine product about which you can discover more here, he said pluggingly). The culling of the vendor herd also made sure that attendees had just a few places to focus on (though I only sold about a dozen DVDs, and I know that Vintage Stock didn’t exactly do gangbusters business either). Many people come to these shows precisely to see what they can find for their collections, and a shortage of vendors can drive them away from the door, resulting in a shortage of buyers for the vendors who are there. It’s a vicious cycle. I’d be more in-your-face about saying “shame on you” to the no-show sponsors, but between the Arkansas/Oklahoma state line and OKC proper, we sluggishly drove through about a zillion construction zones (okay, slight exaggeration – it was only a bajillion). I can sorta see where they’d get discouraged driving in from Tulsa or further. 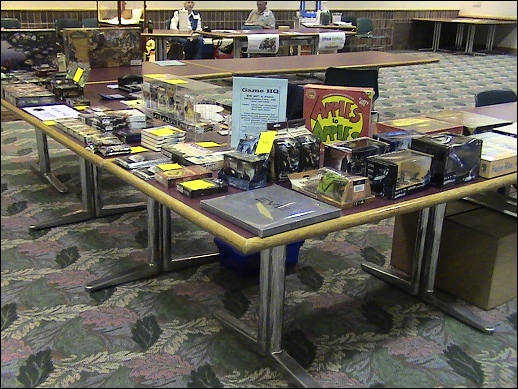 Your official OEGE board game and collectible card game source.

Not that this stopped everyone, mind you – plenty of regulars from the Digital Press and Retroputing forums were on hand, from as far away as Joplin, with massive tradebait boxes that would’ve required tank treads if they’d been any biger (the trade boxes, that is, not the aforementioned regulars). I had forgotten my own trade box – a.k.a. The Place Where Common Cartridges Go To Die – and in fact I had no games at all with me, since I was trying to focus on the DVDs. I’d made a last minute decision to leave the battery-powered Coleco tabletops at home, and I realize now that I probably should’ve brought them. 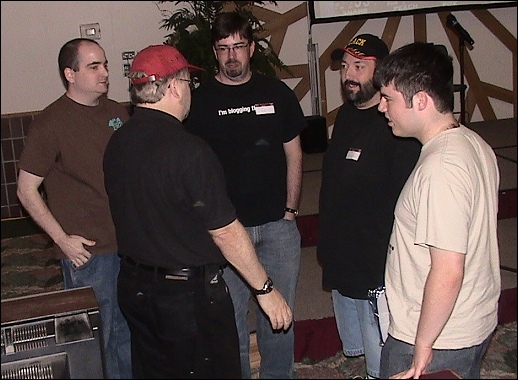 I’m trying to be a little more conservative with my expo wares these days, precisely because with a child to take care of, I just don’t have the energy to pour into preparing a massive display a la OVGE 2004, which is still, for my money, as good as it’s ever gotten on my part. If it would have needed to be unplugged from my shelves in my game room to make the trip, it wasn’t going this year. Which explains the cranky DVD player and TV I pulled out of self-storage to bring with me so I wouldn’t have to yank that equipment from my game room – both threatened not to work at one point, and it’s a bit difficult to sell a DVD whose contents can’t actually be seen beforehand. 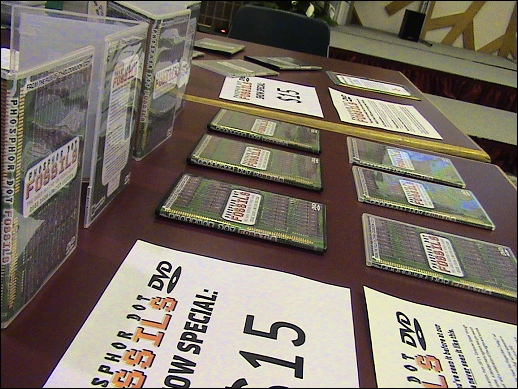 The Phosphor Dot Fossils DVD on sale at OEGE.

There was a four-player Wii setup with a large projection screen, as well as a Guitar Hero setup with an Xbox 360 not too far from our tables, and those were occupied almost non-stop throughout the day (especially Guitar Hero). Vintage Stock had a Vectrex setup for sale, as well as a Virtual Boy and, sadly, a 3DO that could never quite be coaxed into working. The other two vendors focused on different areas, one stocking a sizeable amount of comics and manga, the other concentrating on board games and collectible card games. 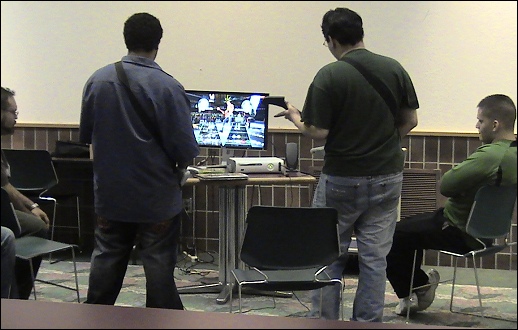 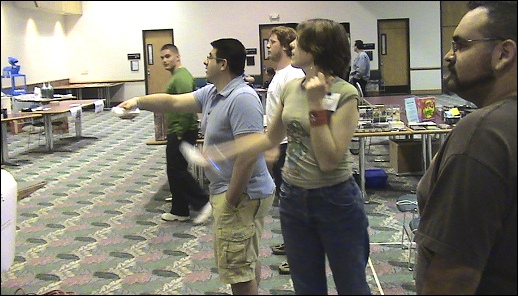 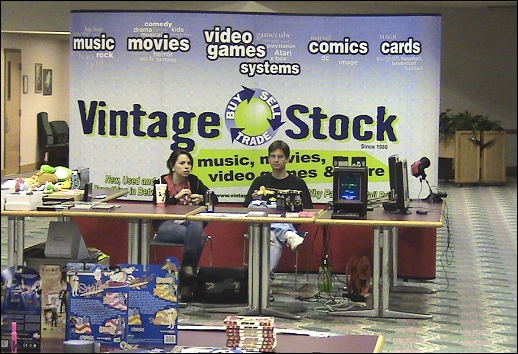 Despite Coke being a no-show, their new energy drink Full Throttle made a good showing, carting around a huge mobile cooler full of the stuff. I don’t too much product placement/endorsement stuff, but I will offer you this: I don’t think I truly woke up and talked to people until I had at least one can of this stuff flowing through my veins. The funny thing is, the sparse crowd wasn’t enough to handle all the Full Throttle on hand, so those of us working tables wound up with huge quantities of it – Kent and I each wound up with about a case worth of the stuff, roughly half of which we consumed during the course of the day! So a big thanks to the Full Throttle folks – I probably would’ve been asleep by lunchtime if they hadn’t shown up. 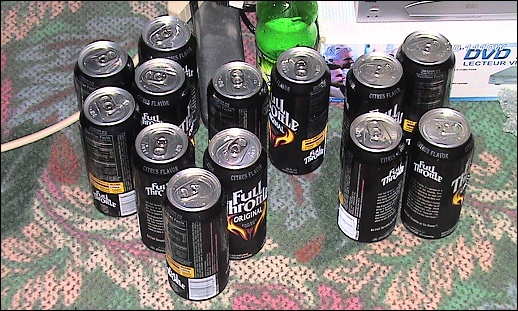 Is that enough Full Throttle for ya? 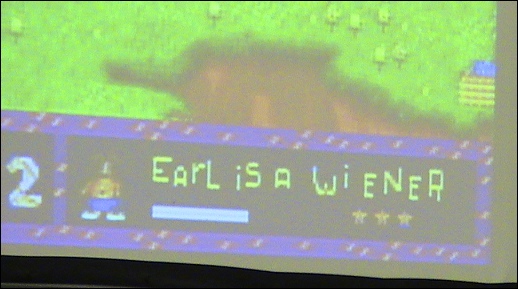 After I’d had a few cans of Full Throttle, I started seeing stuff like this. No, wait, that’s actually Toejam & Earl on the Wii.

In talking to OEGE’s organizer, I learned about some of the things that went wrong behind the scenes, namely in promoting the event. Though it provided a place to gather, the college managed to hamstring a few things promotionally, including insisting that the school’s IT department handle any website launched for the event. Since it was close to the end of the spring semester, no site was ever put up, which put a serious crimp on promoting OEGE. Equipment failures on the eve of the show cancelled one display I was looking forward to, the actual playable demos of the CATS members’ work-in-progress games. I’m not sure I can stress enough how cool it is to have a little school in Oklahoma City offering courses in game design – how many people in OKC even know about this? – and this very likely cost CATS its best publicity opportunity of the year. I don’t even know how well-represented the club was at the show – there were four or five students with CATS T-shirts – but once again, one suspects that it was probably more to do with end-of-the-semster bad timing than anything else.

The show simply died at lunchtime for a bit, and pizza was offered to all of the vendors and show floor workers, though I’ll admit that I passed because, while I love pizza, this was one of the greasiest pizzas I’d ever seen. I have no doubt that it was delicious. I also have no doubt that I would’ve been in the men’s rest room down the hall for the rest of the day if I had partaken. Things picked up again around 1:30 or 2 in the afternoon, though shortly after four even the show’s organizers started to close up shop. OEGE was a memory by the time show’s officially announced “5pm-5:30” closing time rolled around.

There are plenty of lessons to be learned from running a first-time show, and few first-timer lessons are learned without a few bruises. Better promotion would’ve made a huge difference, but even finding the show once we were inside the building was a challenge. (It didn’t help matters much that there seemed to be some kind of trade show filling the entire hallway that one had to walk down just to get to OEGE.) There was a distinct lack of signage, but on the campus itself there was also a shortage of signs pointing one toward such places as the student union until you were almost on top of it anyway. (That’s really the school’s problem, not the show’s, however.) Hopefully OEGE will survive into its own sophomore year and learn some of these lessons, because it has the potential to be quite an interesting show that could offer things that one doesn’t get from other shows.