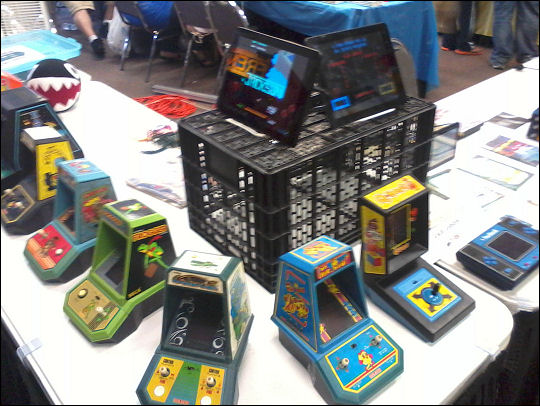 This year saw OVGE move to new digs, as the previous venue, Spirit Bank Event Center, has been put under new management that apparently no longer wishes to use the event center to host, you know, events. Because surely Tulsa needs more leased office space. In any case, OVGE moved to Broken Arrow’s PJ Gamers facility, a combination of a game store, an arcade, a LAN center and an RPG gaming space. A lot of the things for which the store is known got unceremoniously shoved aside to make way for OVGE table space for just one day! 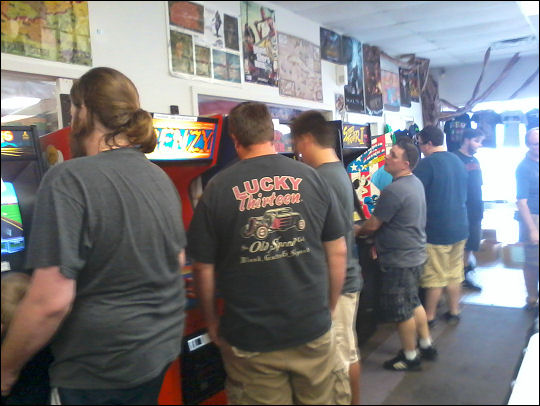 The result was a tighter squeeze than usual, and on the other side of the building from where I was, it was very hot for both vendors and visitors. For once in my life, I was hanging with the cool kids. Because PJ Gamers is sectioned off into various gaming spaces, things were just a little bit more maze-like than usual. 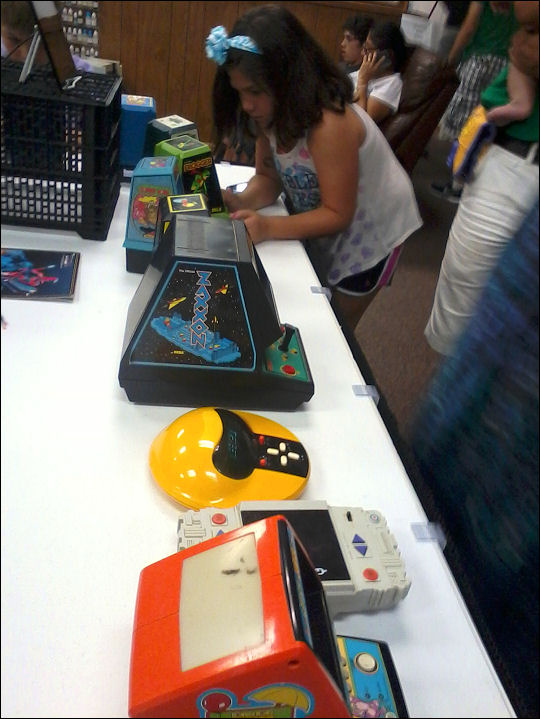 I brought my collection of battery-powered portable games from the ’80s, and that collection was augmented by OVGE organizer Jesse Hardesty’s latest Entex finds. There were ten games total, most of them sucking down “C” batteries for the whole day. 😆 On display with the portable games, but seldom tried out, were tablets showing how much has changed about portable gaming: to wit, everything. 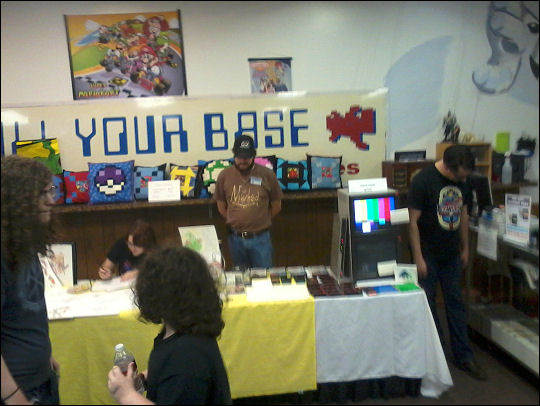 I didn’t get out from behind my table much because I was flying solo for this year’s show, but even in my immediate vicinity there were plenty of interesting things, such as Drew Stone selling classic games and broadcast-quality monitors on which to play them. 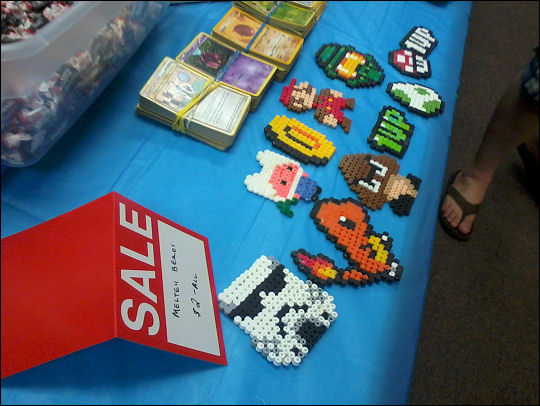 The O’Hara kids made numerous classic gaming bead characters, magnets and coasters, and sold their homemade wares all day. 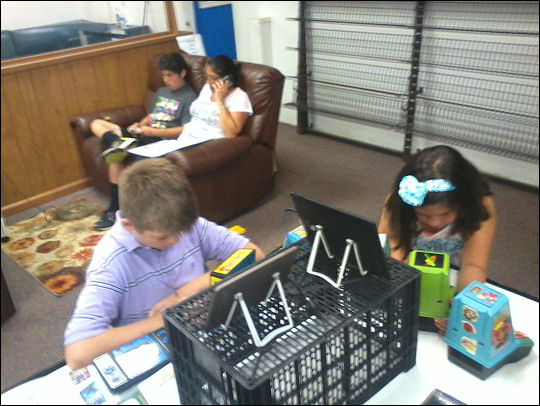 My little battery-powered arcade distracted everyone’s potential customers and their kids all day. 😆 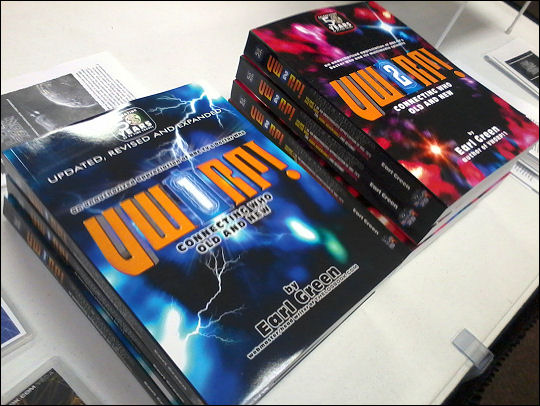 I also managed to sell one of each book – not a bad deal when the books I’ve written have nothing to do with video games! 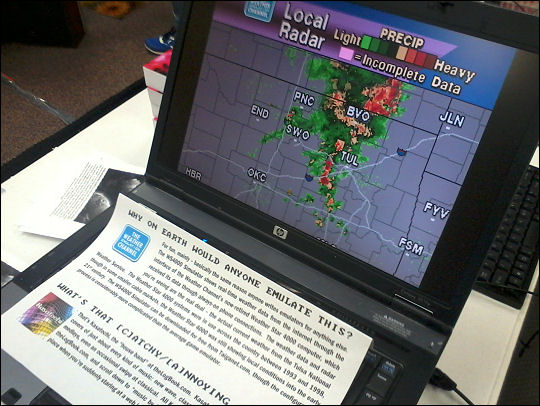 The surprise hit of the show was this laptop, running live emulation of the Weather Channel’s mid-’90s Weather Star 4000 local forecast display system. I expected smirks and laughs, and wrote up a “why would anyone emulate this?” placard accordingly. To my surprise, people wanted to know where to get it, how to configure it, and so on. We also had a nice little heavy thunderstorm blow through, so it was an outstanding live tech demonstration (which also soothed and/or annoyed the crowd by playing a random playlist of Kasatochi all day). I was stunned by the degree to which this interested people. I’d jokingly teased that I would be bringing an emulator that no one at OVGE had ever seen before, but I wasn’t expecting a positive reaction to a non-gaming-related emulator. 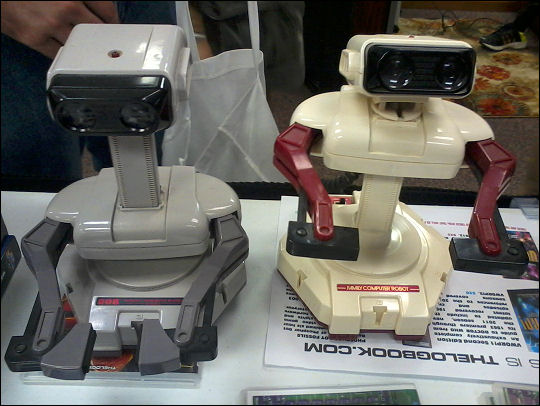 And then the robots invaded and things got a little crazy. 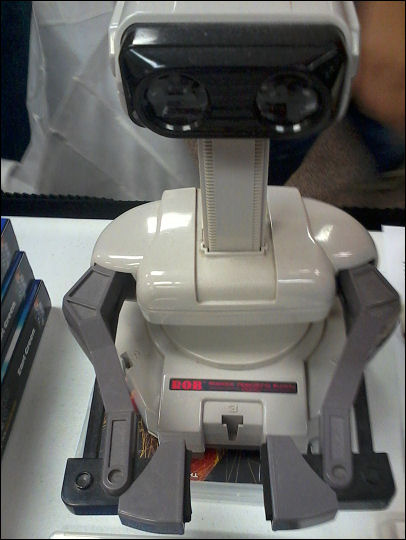 This is an intact, functioning Nintendo R.O.B., or Robot Operating Buddy. In the mid 1980s, when retailers still felt burned by the crash of the video game industry, they only agreed to put the NES on the shelves if it came with something that was obviously a “toy”, so it would be a toy and not a video game. Within about a year of the NES’ launch, it was possible to buy an NES without R.O.B. – the robots had invaded and plowed the road for Nintendo to restart the American video game industry. 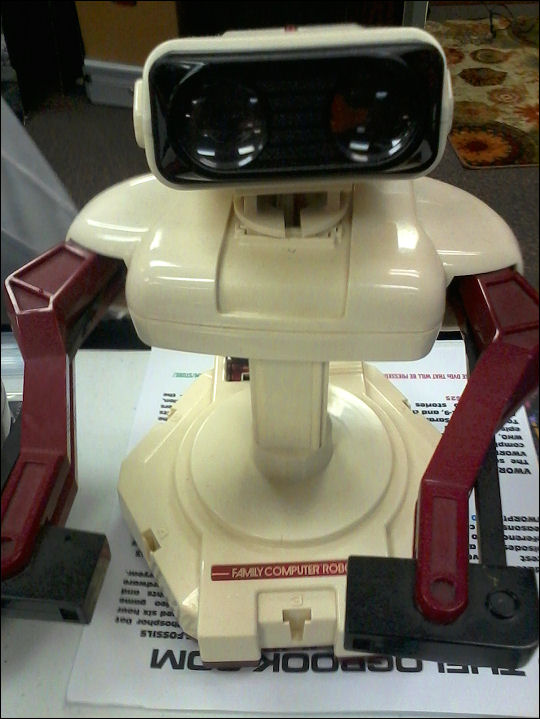 What I didn’t know was that there was a R.O.B. released in Japan as well, though his Japanese name was “Family Computer Robot”. Whatever they’re called, I, for one, welcome our new Robot Operating Buddy overlords. 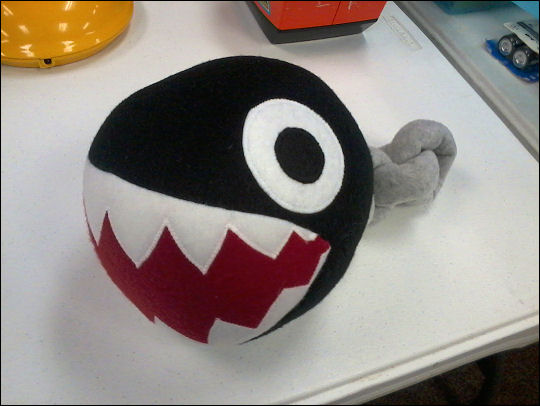 I also scored a Mario chain chomp plushie for Little E from Penguinotic Designs (see their Etsy store here). He couldn’t be with me at this year’s show, and he’d been saving up for one for a year, so he’ll be surprised when he gets home from his vacation with the fam. 😉 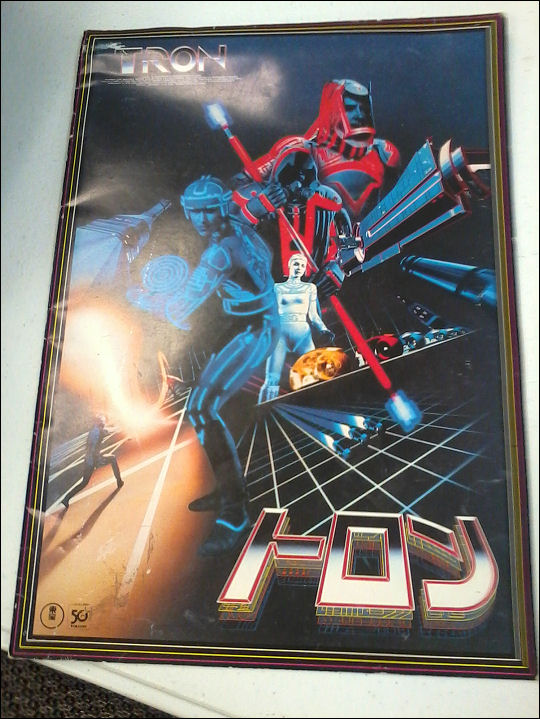 I was just as surprised when Vic Sage of The Retroist fame scored this Japanese Tron theatrical program for me, adding yet another specimen to an odd sub-collection of mine: Tron stuff from Japan (!).