Allow me to introduce you to my very Trekkie 2011 Christmas stash. Charles and Mr. Flibble threw a Hastings gift card my way, and John hurled an Amazon gift card at me with all of his might, taking off a couple of limbs* in the process. (Oddly enough, I turned around and spent the majority of both on the wife and kid, who don’t have folks from the internets buying stuff for them. Call it redistribution of wealth if you like.) Okay, here’s the Trek trove: 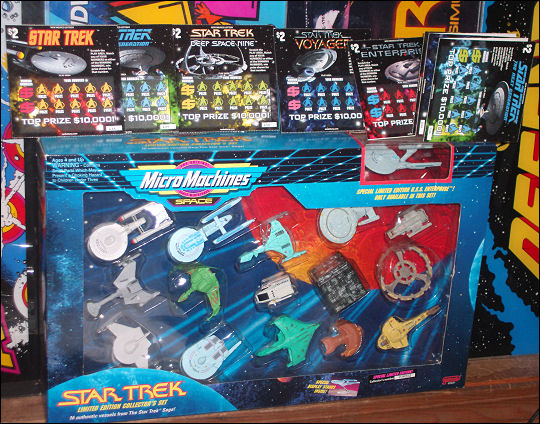 The big box is, of course, the first Star Trek Micro Machines box set that came out in the ’90s. I had one of these at one point… and took them out of the box, which meant that some of them went AWOL by the time I did a piece on my site about them. Now the set is complete once more – though given the little hands (and mischevious little paws) roaming through my house and getting into stuff, this one might be staying in the box. On a high shelf. Thanks, Dustin!

On top of that are Star Trek lotto cards from New Mexico, thanks to Paul and Charles. I haven’t scratched them yet. But I probably will soon (like I can claim them from Arkansas anyway – watch them all be worth $10,000 as a result – c’mon, Deep Space Nine, daddy needs a new pair of anti-grav boots).

Not shown are the new underwear (trust me, you don’t wanna see a picture of that, or at least not a customer action shot), a new dish towel and an oven mitt. What’s really funny is how happy I was to have any and all of it. I needed another oven mitt, and man, did I ever need some new underwear. Throw in some cash from the in-laws (already assimilated into the Borg-like household-bill-paying collective, just to keep the Star Trek theme going), and there ya go.

Not bad at all, considering that I’d told everyone in the family to spend their money on the kiddo. (And boy, did he make out like a bandit. Woody and Buzz and WALL-E and Artoo and the Mario Brothers have a red R/C Mustang convertible to drive around in. Now that’s a sight.)

I’m truly grateful to… well, anyone who sends anything my way, really. It’s not something I solicit or ask for, and under present circumstances it’s not something I can afford to reciprocate either, as much as I’d like to**. Thank you.

** things will be different after I win the New Mexico lottery, I promise