One of Little E’s favorite games on his Leapster 2 is Star Wars: Clone Wars Jedi Math. From just listening to it (and, okay, playing it just a little bit), it’s a pretty fun little math game (I would’ve gone over to the Dark Side just to have a Jedi Math cartridge back when I was a kid; instead, I had… Math-A-Magic!). He plays it a lot, even if he’s not exactly memorizing the names of the Jedi Council.

Tonight, he played a pretty good game, rescued some Republic prisoners from the Trade Federation, and just before plunging into a new level of the game, held up his new R2-D2 figure and said “LET’S DO THIS, ARTOO!” That’s my boy. 😆 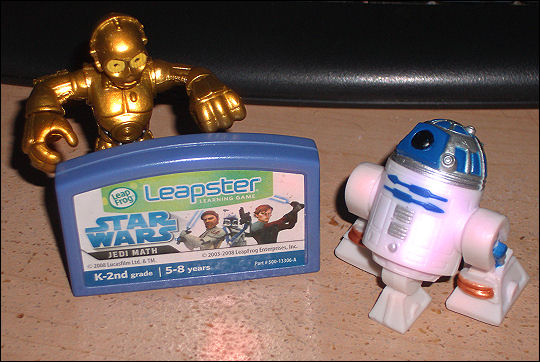 And if you think that’s impressive, check out the age/grade bracket that the game falls under on the label. God and/or the Force willing, he might just be better at all things numerically-oriented than his daddy was.