It’s the end of an era here at der Greenhaus: the rope lights are coming down from the game room shelves. We’re talking about a lighting scheme that I’ve leaned on pretty hard since the last house I lived in,

so… nine years exactly. And the funny thing is, a lot of these rope lights have been around since then, so at the very least it was time to look at replacing some of them.

But that’s not what the plan is. As with every other room in the house, the carpet has to come out of my room, so everything has to be disconnected, moved elsewhere in the house temporarily, and then moved back in when it’s torn down to a smooth concrete floor. Even that is temporary – at some point when we can afford it, we’ll get flooring put in (but not carpet – never again), so it’s kinda like all the fun of moving repeatedly, minus the fun of actually moving it to someplace new and exciting.

When my room goes back together, its primary function won’t really be “game room.” It’s my intention to get another Wii and softmod it, probably as the prices start to dive during the inevitable sell-off as everyone upgrades to Wii U, and basically mirror the emulate-everything-that-ever-was gaming machine (and the non-gaming media center functions) that the living room Wii now has. That Wii will live in my room and will be the catch-all media gadget, eliminating quite literally almost a dozen pieces of electricity-sucking, heat-generating hardware. 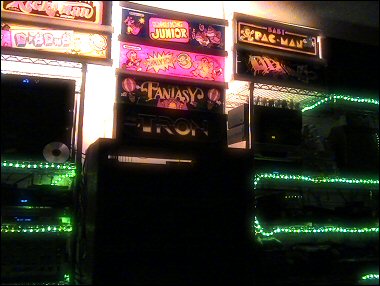 Pumping the signal through a bunch of VCRs, distribution amps and monitor throughputs was a cool idea… back when I was going for the idea of a room with a zillion systems hooked up, ready to go at a moment’s notice, and all capable of outputting their video to the Avid to facilitate the production of what became the PDF DVDs. But when you’ve got one machine that can almost flawlessly emulate everything and stream video and music? The heaps of hardware are simply no longer necessary. The steel shelving units are urgently needed in the pantry/utility room, and I’ll probably bring that room’s ex-bookshelves into the game room; without heaps of hot hardware, the steel shelves aren’t needed, and the rope lights need to come down.

But does that mean it’s all over? Aww hell no. The room will simply be reconfigured. All those little white plastic shelves I’ve invested in – you think those are good for anything but backlighting marquees? The “fun” of the room ain’t goin’ nowhere. And I’m planning on borrowing a page from my grandfather’s playbook.

My mother’s dad was a master photographer who mainly did nature and architecture photography, earning quite a name for himself in New Jersey and New York. As a result of taking pictures of architecture, he had some interesting ideas of his own that he put into practice in his own home, which may still be – nearly 25 years since I last set foot in it – the neatest house I’ve even seen. There was so much neat stuff about that house that I could probably take up a whole blog entry remembering it all, even though I have no photos to back it up sadly. (I did shoot video when I was last there in 1988, but go figure, I can’t find the tape.)

One really need feature of my grandfather’s house was the lighting. There was very little in the way of direct lighting. The kitchen, great room and entryway areas did not have walls that went all the way up to the ceiling (an interesting architectural decision in and of itself: where are the load-bearing structures?). On top of these “mostly walls” were lighting fixtures. They threw out a lot of light, enough to read by for the most part, by bouncing it upward off the white ceiling. Once you got back to the bedrooms, of course, you had complete walls for privacy, and more traditional lighting fixtures – overheads, reading lamps, normal bathroom lighting, etc. But that wall of indirect light fascinated me. I never did get the chance to get on a ladder, or just climb up on the freakin’ counter (Flora would’ve chased me out of the house for that), to get a look at what kind of lights were mounted on top of those not-quite-full-height walls. I think they were fluorescents. I don’t know.

I want to try a variation on that. The previous rope lighting scheme was all about mood and color, and that’s cool – that’s doable. I’m not looking to light the whole room bright enough to read. I’m looking to create a moody, relaxing space in which you can’t really tell where the light’s coming from, but you can still see it.

Other objectives with the next reconfiguration: 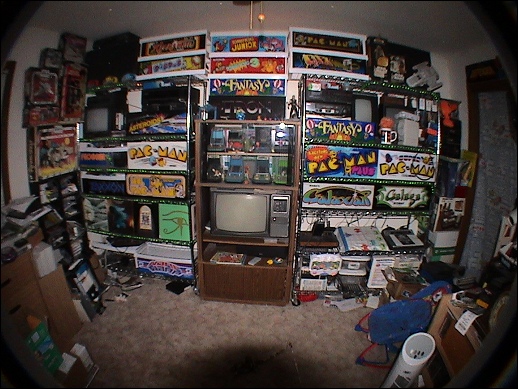 It’s all about hiding some light, and yet having it hit as much crap as possible. This is going to be fun. And if I can bring just a little bit of the coolness of one of the coolest houses I’ve ever seen to my house, all the better. It’ll probably drive my wife nuts… man, this just keeps getting better!

Weep not for the rope-lighted game room of old. It was really nifty back in its day. But even niftier stuff is waiting to happen. And until the flooring thing happens… I’m really digging the concrete floor in the living room. If it was less fugly, I’d say it could stay.