Nobody got it! Nobody! Last week’s Bad Visual Pun of the Month (well, probably more like Bad Visual Pun Of The Indeterminate Time Period) went completely unsolved. Here, then, is the answer – although it required some slightly specialized knowledge about one of my stranger creative projects. 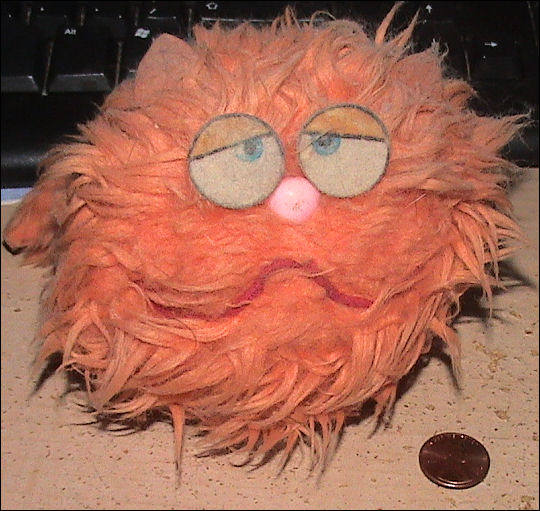 Jump Cut City was a seemingly long-running video project started by Rob Heyman and me in 1988. The genesis of it was basically this: I got a camcorder. A great big tanker truck of a thing by today’s standards – it shot on full-size VHS tapes. To put it succinctly, we used the hell out of the thing. Any directorial or editing or in-camera effects trick that we could think of to try for ourselves, to try to figure out how it was done, we’d do. There was seldom, if ever, a script – not until several years in. And to be honest, a lot of it was just flat-out stupid – two kids making movies. It looked like two kids making movies. Whoever wasn’t in the shot was holding the camera, and we totally forgot the fourth wall: the camera was the perspective of the other person, and we’d do crazy stuff like fight scenes where punches were thrown straight into the lens. Sam Raimi would’ve chuckled politely and then started looking for the exit – it was that amateurish.

It’s a wonder we didn’t have the camera torn to bits by ’89.

I have a great love for the Opening Title Sequence. It’s a dying animal in this day and age, but I was raised on the greats from both sides of the Atlantic. Every episode of what was now called Jump Cut City* (JCC for short) had an epic-length title sequence, often tied to the length of whatever ELO, Steve Winwood or Alan Parsons Project tune I was obsessed with at the time. There were, admittedly, episodes that were shorter than the titles. But man, I had to have my titles. I’d always wanted to make some titles. I would not be denied.

* a jump cut, in video jargon, is a bad edit: something in the foreground or background doesn’t match up, someone’s not standing where they need to be, a prop suddenly switches from someone’s left hand to their right hand between shots, and so on. Hollywood employs armies of “continuity” people – look for this in movie and TV credits – to avoid this stuff. Zucker-Abrams-Zucker productions used to make such things happen on purpose for laughs. We just kind of owned up to it up front.

Gradually, characters began to be developed. A narrative emerged. This stuff was taking place aboard a spaceship called the Win-A-Prize (represented by shots gleefully filched from the growing number of Star Trek: The Next Generation episodes airing at the time), and it involved two guys who kinda sorta got along together, and yet didn’t, whenever it was convenient and resulted in some opportunity for action. Laugh all you like, it makes as much sense as some of the stuff that actually keeps studios busy in Hollywood. 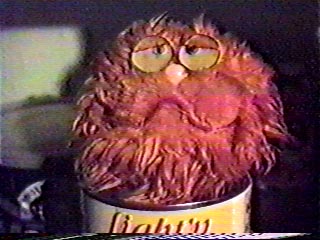 In one episode, a stuffed animal – an orange cat holding a sign reading “get well soon” – appeared, moments before the ship was destroyed. His bizarre momentary appearance out of the blue amused us so much that he became a regular character, a “fiddygibber” named Burchuss. Rob actually named Burchuss, and meant for him to be Burgess, as a tribute to Burgess Meredith. But I misheard him, and the distinctive misspelling stuck. Burchuss had no dialogue in English. He just said “Uah!” (usually by way of me abusing my vocal cords).

A lot of this was “produced,” if you even want to call it that, during the long unsupervised stretches of my high school years that were spent at my house. I’d devised my own editing system (two VCRs hooked up together) as well as a very rudimentary means for recording multitrack music and sound effects to be added later (two cassette decks, a cheap Radio Shack mixer and a Casio keyboard). There was absolutely no precision offered by these very analog innovations/improvisations; things either lined up right or they were a bust. Repeated attempts to “get it right” this time would just buy you a worn-out tape. As often as not, the editing was done “in camera,” stopping and starting the record button. Other friends joined in the fun – William became a regular co-star – and yet we didn’t show it around to a lot of folks.

Chronicled afterward in a large, ungainly text file, but never consciously developed beforehand, JCC had quite a twisted little mythology all its own. Heroic Hukka came from the planet Dworb. Demented Buh’s weapon of choice was poison leaves. In the bowels of the “ship” – actually, my house – instead of antimatter, the whole thing ran on a empty can of Planters Cheese Balls can of “Nothingness,” and if we ran out of nothingness to power the ship, “dead time” would surely ensue. And somewhere out there lurked the Thunderous Breeyat, a sort of Flying Dutchman built by Practitioner Pinzizad of the planet Quibbinfixie.

In 1989, we shot something meant to be the “series finale” which killed all of us off for some very strange reason. School was taking up more time. And then came the real show-killer: college.

But in 1990, Rob and I reconvened, freshly re-obsessed by Star Trek’s impressive season finale (you know the one), and flush with information gleaned from Cinefantastique’s latest Star Trek recap issue, chronicling the behind-the-scenes goings-on. We were hooked once again on the idea of making our own stuff, but a bit older and wiser and more focused, the thought actually occurred to make it halfway decent. If possible.

I actually re-lit the living room of my house for the occasion, trying to actually get it to feel somewhat like a set. A completely bizarre, still-not-scripted comeback episode, “The Third Nostril,” sealed the deal; JCC was back, baby. It was back in fits and starts, to be sure; it had to wait for both of us to be in Fort Smith. There were abortive attempts at “solo episodes,” but it was obvious by that time that there was something totally weird, twisted and utterly hilarious in how Rob and I played off of each other. Even though the tapes were still only circulated among a very small circle of friends (and was becoming required viewing in Fayetteville when Rob returned to the university), we were constantly working on making it better.

Sometime in 1991, I’m not sure who suggested it, but we did the unthinkable: scripts were suddenly being written. The first script, a strange two-parter called “Stellacide,” finally pointed the whole endeavour, all of this effort, in a specific direction: in the way 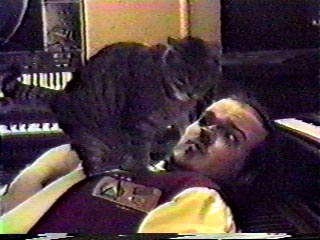 that Police Squad and The Naked Gun spoofed cop shows, and in the way that Airplane! spoofed disaster flicks, we were spoofing sci-fi, specifically Star Trek, which had started to idle enough that it was ripe for parody. Our scripted endeavours were a bit daunting: it would require at least three to four extra people as guest stars or voices, which meant letting others into the strange JCC “bubble” that existed around the whole thing. The beauty of JCC before had been not having to explain it; now we found ourselves having to explain it.

Rob pitched the show to what was then known as Access 4 Fayetteville, the Fayetteville cable public access channel, and to our surprise, the answer was “Hey, sure we’ll show it!” Um… show what? We had exactly two scripted episodes in the can.

Now we were really in trouble.