Category Archives: And Beyond The Infinite

One day in the solar system…

All pictures taken within the last 24 hours throughout the solar system.

Not bad, humanity, not bad at all. More days like this, please.

Murray Buttes, Mars, day before yesterday, stitched together in ~10 minutes from images on the Curiosity raw image server. The seams show in a couple of places, but if you can overlook those… look upon it in wonder. Click to see a (much, much) bigger version.

Be even more Pacific

Could you please be more Pacific

A brief note about the universe

Fire a bullet to satisfy some sense of tribal pride, some sense of fury that someone dares to believe or dares to have simply been born differently than you.

Or fire a rocket into space and learn more about how we were all actually born the same, and how the differences barely matter because when you look back, the borders don’t exist.

It’s all about controlled explosions. Chemical explosions, or bursts of passion.

We can choose to learn, or choose to burn. It’s. that. simple.

I know I’ve probably driven half of everyone reading my Facebook and Twitter feeds crazy in the past few days/weeks/more-than-weeks (remember how Pluto-happy I was about 350-odd days ago?) with all of the space stuff. But it matters. You may not see how it applies directly to you. But it does.

I try to share that awe and wonder with everyone who wants to know more. Articles…podcasts…websites. “But you run a sci-fi site, right?” Sorta. The focus has shifted in recent years. In a way, the sci-fi is there to lure you in so I can talk about that awe and wonder.

I figured out a long time ago that I wasn’t going to be an astronaut or a scientist. I’d read National Geographic and Astonomy Magazine articles about the people playing various roles on the Voyager and Viking missions, and I’d idolize them like rock stars.

Did/do I ever have the mental agility to join their ranks? No. Found that out pretty early too. Only later in life have I figured out why. Why some days I can hold this whole universe of knowledge in my head, and synthesize it successfully, while other days I have the mental acuity of a particularly gited sea cucumber.

But one gift I do have is to smoosh some words together and tell a story and draw you in to learning more than I know about this stuff. (Spoiler: that’s a skill you acquire as a parent.) So if it really drives you batty, I’m not insulted by anyone who wants to exercise the unfriend/unfollow option…

None of that changes the fact that the universe is out there.

We just have to judiciously harness the right kind of controlled explosions so we can stop harming one another and go see it.

Aside from hugs from my boys and kitty kisses and puppy snuggles, this was the best of 2015… 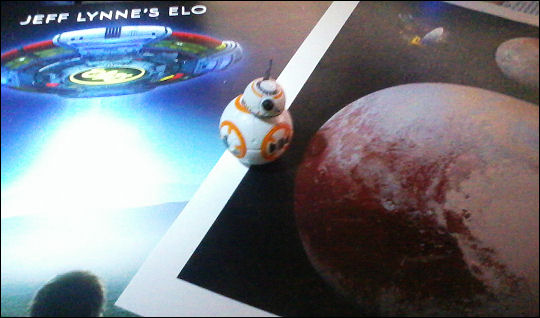 …and don’t get me wrong, all of that was cool…but I’ll be pretty happy to put this year out to pasture. Be gone with ye, 2015.

No Comments And Beyond The Infinite, Music, Television & Movies

Encounters at a variety of far points

No wordy blog post tonight – did that last night. But I thought I’d share with you a few gems I found on Youtube: the live coverage of past planetary encounters. I hope you enjoy this stuff like I do. END_OF_DOCUMENT_TOKEN_TO_BE_REPLACED

Here we are, on the eve of our closest – and perhaps, for my lifetime, only? – visit to tiny Pluto, the body which marks the outermost boundary of the “classical solar system”. My generation was brought up counting nine planets; it’s only in the past decade that the obsessive-compulsive need to shovel things into rigidly defined categories knocked that down to eight.)

It’s humbling to think about it: Pluto is the most recently-discovered of the “classical solar system”, and the only one discovered by an American astronomer, Clyde Tombaugh. Not even Tombaugh could have imagined that, 85 years after he found that speck of light that moved between two still photos of the night sky, we would be there. END_OF_DOCUMENT_TOKEN_TO_BE_REPLACED