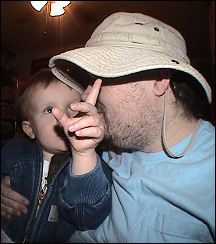 Sorry I’ve been neglecting you, blawg (and any readers still left out there). I’m still getting used to the whole rhythm of having a steady job. You’d think (and I would’ve thought) I would’ve gotten used to it by now, but it still hasn’t happened for whatever reason. Evan has lots of overnight outbursts, and sometimes I think they’re all about making up for lost daddy-and-Evan time. He just wants me to hold him until he falls back asleep. Daddy can do that… but it robs me of sleep on the flipside, and I have to try to get some nap time in after Evan goes to day care, and the end result is that it often seems like I do two things: work and sleep. My hours have normalized a bit – no more radical changes in my in/out times from day to day – but the sad part is, the hours have normalized to where I’m only home to tuck Evan into bed two nights a week. At this point I think I’m having more trouble with that than he is. I miss my Evan time.

I do make the most of it while I’ve got it though – he’s been wanting to sing along with the ABC song and Jingle Bells a lot lately, and I’ve been trying to accommodate him, especially since his musical tastes aren’t developed enough to know that daddy can’t really sing worth two craps. He also listens to every word I say on the drive to day care in the morning. Case in point: one day I had some choice words for the driver ahead of me. Evan then repeated those choice words all day at day care. Thank God the words were only “NICE TURN SIGNAL, BUDDY!” (In case you can’t tell, some vital portions of my trash-talking-other-drivers education took place during one of my visits with my grandfather; the classroom was the maze-like street grid of New York City.)

Evan’s been getting along just fine with the other new addition to the family too. Actually, everyone’s getting along with Puck, the new black cat (code names: Puckalufagus, Puckbill Cat-a-puss). Puck also got some of his education on the mean streets, and it shows: now that he’s in our house, he has absolutely zero interest in going outside (unlike Oberon). We’re still experiencing a bit of a learning curve with convincing him to stay off the kitchen counter, out of the trash cans, etc. etc.; I gather he’s had to dig through a few trash cans to find dinner in the past, and it’s a habit he’s having some trouble breaking. But he’s not being destructive or terribly messy – on the contrary, he doesn’t leave a single crumb when he eats – and he’s emerging as a very benevolent alpha male, keeping the peace when the other two cats fight. Puck has been allowed to keep his claws intact because he’s very choosy about using them, and that give his enforcement of household feline peace a little bit of authority too. It’s not uncommon to see all three cats curled up together, which may be a new ground speed record for universal adoption-to-acceptance in our house. He sleeps with me at night; as yet, I don’t know if he picked me or if I picked him. Considering that he showed up at my workplace on the first night of my new job, I’m leaning more and more toward the former.

Speaking of Oberon, today marks three years since we adopted him. December 19th being the life-changing day that it is in our family history, that also means three years since I saw Sultry drown right in front of me, three years since I gave my notice at the station where, ironically, I’m now working again (though in a very different capacity), and all of those events directly or indirectly are tied in with Evan… happening. Looking at where I am now is kind of eerie: I’m back to working at the same TV station, where a black cat showed up to replace my sorely-missed black cat… more than once I’ve looked around, worried, to make sure that I get to keep my kid out of this deal. It’s nice to have the job (and even nicer to have the cat), but there are some parts of the status quo that I don’t want restored.

Oh, and by the way…NICE TURN SIGNAL, BUDDY!

I’ll try to blawg a bit more often. In fact, there’s some really startlingly inconsequential blogging just around the corner…