This one will probably only be of tangential interest to even the most hardcore teevee geeks, but darned if it isn’t really useful if you happen to be in the production end of the business.

This doesn’t appear to be an even remotely recent development, but there’s a downloadable free app called Test Card Maker that allows you to design and save, at just about any resolution and in a variety of aspect ratios, your own test patterns. There are a great many downloadable parameter files which imitate popular (and often useful) standard test patterns, from SMPTE color bars (i.e. what you used to see late at night back in the days when TV stations actually signed off) to the legendary BBC Test Card “F” (the one with the little girl in the center – this probably won’t mean anything to anyone on this side of the Atlantic unless you’ve watched the original UK version of Life On Mars) and everything in between. Monochrome, color, you name it.

A lot of what I put into my editing system comes straight off the PC’s S-video output, which up until recently simply parroted whatever I had on the desktop, icons and all. A recent update of the driver for my video card finally let me do the “extend desktop onto the second screen”, which meant I could compose a “double-wide” desktop with something different on the S-video output than the desktop. Since that output feeds stuff to the Avid on a regular basis, I decided that a good set of pre-calibrated color bars was what needed to be there.

While I’m gone at work, my wife logs into her user settings on my main PC and uses it to queue up a random playlist of stuff for Evan to watch while she’s getting dinner ready. Instead of boring color bars, however, the portion of her desktop that shows up on the TV in my room has a… shall we say… slightly modified version of the old “Indian Head” test pattern. 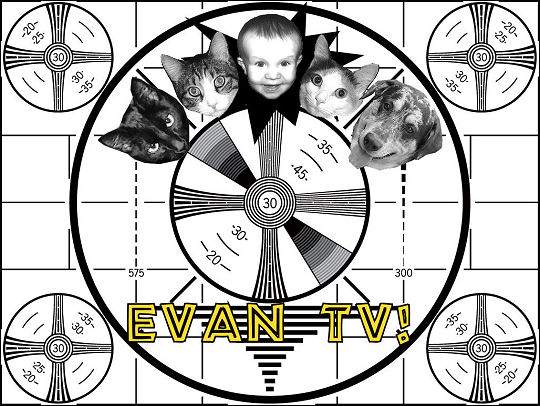 The only problem is that Evan likes his test pattern almost as much as he likes watching anything else on that screen. 😉

Test Card Maker is neat in that it can render at just about any resolution, but you can also save a parameters file that basically amounts to a very short text file, allowing you to make adjustments later. I haven’t really gotten a fix on whether the author of the program is an actual TV engineer or just a test pattern afficionado (there are such things, you know), but it’s an awfully handy program to have. You can download Test Card Maker and about a kajillion pre-built parameters files free.