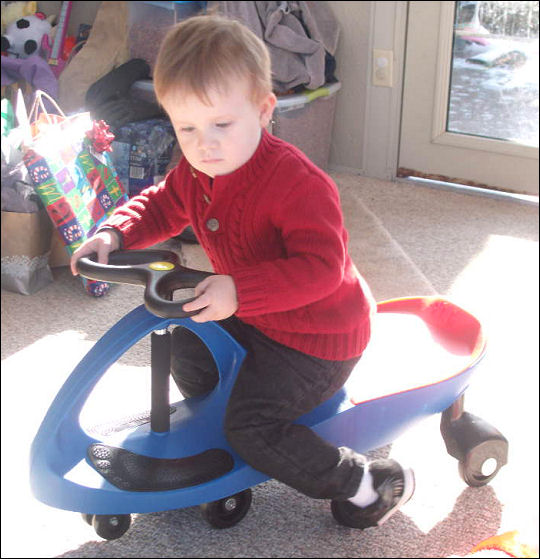 Evan on his new scooter – he’s very determined to figure out the new Emobile. You’ll have to forgive me for the miserable lack of photos – I was spending all of my time helping him unwrap presents (and then trying to figure out how to pack them all back up so he and mom could take them home… while I went to work without them. 🙁 Evan was a little bit unhappy that I had to go, but man, he scored some cool presents! 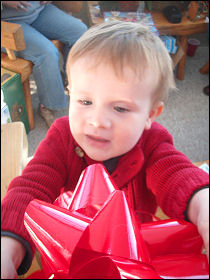 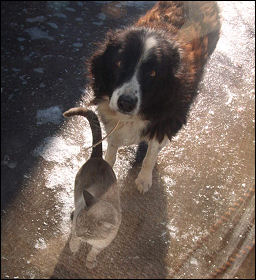 Evan was sometimes just as happy that he’d gotten a pretty box with a bow on top – the fact that there was something inside all that was just a bonus. He got lots of puzzles, blocks, nice new boots, and other goodies. And he even got a visit from an old friend – Taxi showed up at the door, wanting to be let in (turns out, she’s not allowed inside at home – poor Taxi!). We also went to see Taxi’s kittens, all still adorable and fluffy and… big! Sadly, I spent too much time trying to keep them from crawling up me and Evan to take pictures. 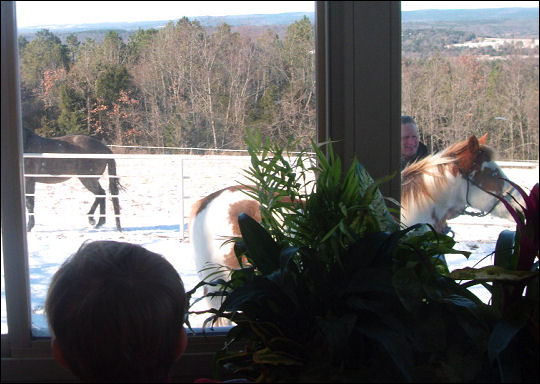 Evan was amazed by his cousin’s big Christmas gift, though – you know how every little girl wants a pony? Well, considering all the horse business this family gets up to, that sort of thing can happen. Very pretty girl. Evan was so excited that you’d think it was his pony (let’s stick to kitties and doggies, little guy).

I’ve heard many people say that once you have kids, Christmas belongs to them. That’s true in my case – to be totally honest, the only use I have for setting up the tree, etc. is to see the little guy’s face light up. I’ll admit that I really only had money to get him one gift this year, but the real gift for me was seeing him happy and excited. If not for that, seriously, I’d be all for opting out of the over-hyped cross-breed of consumer mania and entitlement that Christmas has come to represent in our culture. In years past, especially when I was single, it was usually just another day and, in many cases, just another work day. It passed uneventfully, which is just what I wanted.

These days, I’d be happy for it to keep passing uneventfully, other than seeing unbridled joy on my son’s face. That’s the best gift anyone could get me – other than, perhaps, a schedule where I get to see him for more than 90 minutes a day.

Hopefully you got to see that unbridled joy on someone’s face this Christmas too.


Cannot collect videos from this channel. Please make sure this is a valid channel ID.