Who? Oh yeah…that Who. Apparently filming on season 5 has begun, and the BBC has popped the first in-costume photos of the new Doctor Who and his new sidekick onto the official site. Or you can just see it after the jump here. 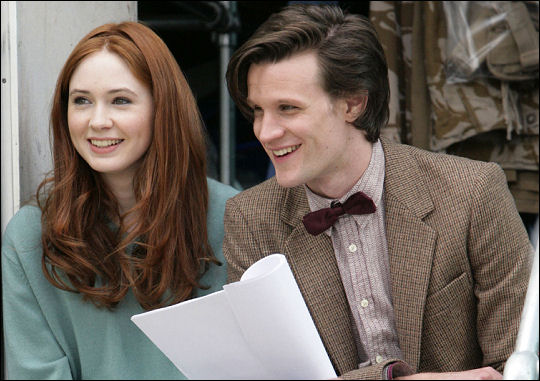 This isn’t a “blargh, I’m not watching!” thing, but…God, he’s so young. I really dig the outfit, but somehow that slightly older look – a bit more “out of time” and eccentric than either of the new series Doctors to date – just seems to point up the fact that he’s so young. She, on the other hand, can wear whatever she wants or nothing at all, and I’ll be okay with that – somehow I’ll make the mental adjustment, yeah?

Seriously though, I am looking forward to the new season – this year has been painful as far as shows I like. Battlestar goes out on a high note that makes me miss it enough to forget how drearily dark it was at times, and worse yet, Doctor Who is limited to 4-5 specials, and essentially Torchwood is too. (If this was indeed Torchwood’s swan song, it went out on a high too – though I’m more inclined that the ending is geared more toward putting Jack into place to be present for Tennant’s swan song than toward ending the series.) SJA can’t start soon enough for me, and so help me, I’m even curiously awaiting the skewed-even-younger-than-SJA K-9 series (which technically has nothing to do with the current Who universe, but still…).

My gut tells me that we’ll be hearing about a Tennant/Piper Doctor Who movie at Comic-Con in a week (Peter Cushing’s unavailable to reprise the role). No informed sources or anonymous e-mails, but just my gut. My gut, however, is large enough on its own that it could probably kick my ass if I didn’t give some credence to what it says. That might also dovetail with Russell T. Davies’ move to America, so he can cling to his script all the way through development hell.

The news item on the official BBC Doctor Who site can be found here, which also happens to be where the photo was borrowed from. Get out there and do this little 46-year-old sci-fi series proud, boy.