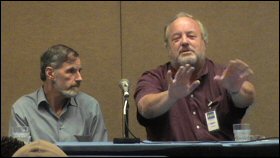 So it’s been made official – Classic Gaming Expo 2009 is off…kinda like Classic Gaming Expo 2008. On the one hand, I don’t know how I would’ve been able to make it to the show, unless the DVD set of Classic Gaming Expo 2007 did just spectacularly well. But just because I can’t make the every-other-year pilgrimage to Vegas doesn’t mean I want the show to wait up for me. I mean, it’s nice to not be missing a show, but when something like this has been absent for two years, I worry about its ability to bounce back.

Then again, I kinda worry about my own ability to do that too; in 2008 I only made it to one show, the inaugural OEGE at Oklahoma City Community College last spring; some crossed wires about babysitting grounded me for the OVGE show in Tulsa, which was the first time I’ve ever missed that show. Earlier this year, OEGE 2009 was announced again, and I went as both exhibitor and vendor. For a variety of reasons that aren’t all necessarily the show’s fault, I did what I was describe as modest sales at best.

Still, all of the above has gotten me wondering if the economy, among other things, is going to change the landscape where retrogaming conventions are concerned. Though that isn’t the stated reason for the postponement of CGE 2009 (in fact, there’s no stated reason of any kind for that as yet, and that in itself may well be doing more to damage CGE than the actual hiatus), it seems to be the natural assumption. For a hobby as decentralized as video game collecting is, this is a hobby that loves its get-togethers and places great importance on them. (I know it’s just about the only time I get to see some of my friends in any given year, especially now that fatherhood is a full-time gig for me.)

Not that a renewed emphasis on informal get-togethers would be a bad thing, mind you. A few years ago I was worried that the “market” was too saturated with major conventions – too many big shows (and too many wanna-be-big shows) vying for too few people in a hobby whose gene pool doesn’t seem to grow very quickly. And the number of shows wouldn’t have been bad, except that you had clusters of shows competing in the same general region: east coast shows (or more specifically, upper east coast/clustered-around-Philly shows), west coast shows, upper midwest shows, and lower midwest shows (i.e. OKC/Tulsa/Dallas). There’s still no big southern east coast (read “Florida” there) show, or much of anything between the broadly defined areas mentioned here.

If there’s anything good that can come from a dearth of “big shows,” however, it’s the rediscovery of the not-so-formal, not-so-planned local get-togethers. They may not have keynote speakers or prize tournaments or vendors, but they also don’t have much pressure. Big shows I can handle once a year or so, because at most of the ones I attend, I’m an exhibitor or a vendor, and that’s work; a get-together, on the other hand, is less stressful all around. Even the host doesn’t have much more to worry about than providing beer, chips, and hooked-up machines. There can still be wheeling and/or dealing too.

So, at this point, perhaps the burden is on the “big shows” (and the wanna-bes) to justify their existence – and the travel/boarding required to attend them – to a potential audience. One thing I noticed while editing the 2007 CGE stuff for DVD was the number of times one of the guest speakers said something like “We’ve been up here so many times before, I don’t know what to say” – and I’d be sitting at my editing workstation going “GAH! Don’t say that!” In “Star Wars: The Annotated Screenplays” by Laurent Bouzereau, there’s a passage about how a line was deleted from The Empire Strikes Back where Han solo indicated that he found the current scene “boring” – deleted because Irvin Kershner felt that the audience might subliminally take that point on board about the movie. I felt the same way about the mentions that both speakers and audience are old salts at this – clearly something needs to be shaken up a bit.

What or how that needs to happen, though, I have no idea. My own experience at OEGE was a pretty good barometer of some of the baby steps though; part of my problem there was that I didn’t make enough concessions for the younger audience you’d get at a community college. I can pass off a working Magnavox Odyssey as an educational experience all I like, but I decided this year that, instead of bringing the stuff I usually take to Tulsa’s OVGE show (i.e. an Odyssey2, my favorite old game machine), I’d bring a Famicom. Of the games I had on sale, the NES cartridges were what moved like wildfire.

Even though OEGE wasn’t a retro show and wasn’t advertised as one, the message is clear: the definition of “retro” is shifting beneath our feet. NES, Sega Master System, SNES and Sega Genesis are now the “in” retro systems; the Atari systems, having had their moment in the sun as cool retro reference points, are now sliding toward the “ancient history” end of the spectrum, admired only by the hardcore collectors. Shows whose mandate is heavily entrenched in the Atari/Intellivision/Colecovision era will lose relevance (and attendance) as the definition of “retro” slides forward.

The sad thing is that many of the former Atari, Activision and Intellivision programmers who already attend CGE went on to program games for those later machines – but nobody’s thought to group these guests of honor together in a different configuration for a Sega Genesis panel, for example. The vendors are keeping pace with the changing definition of retro…but some of the shows aren’t, or at least their marketing isn’t.

Just some thoughts. Admittedly, some of these thoughts may not sit too well with some folks who like their Atari-centric shows just fine. And I’m not saying that anything older than NES needs to disappear from a show floor, but maybe it shouldn’t be as prominent.

Says the guy with a Famicom and a Magnavox Odyssey.

One thought on “The game show blues”