Bear with me, for I have grievances to air. This gets ugly.

The first and most overriding one is one that will get its own blog post down the road, with all names named and documentation provided. The TL;DR version goes like this: I signed up in March to do contract IT work that was guaranteed to last nine months. Nine months is awesome – it’s a figure that’s very much on my mind because we’re having another baby, so yeah, “nine months” is all over my mental landscape and I need income. I had to wait five weeks for the job to start, but we buckled down and ate cheap pizza until I had a paycheck coming in. And then the Pauses happened: you’re not working this week, we’re pausing the project to figure out where we are/what’s going on/who put the bomp in the bomp-sh-bomp-sh-bomp.* Last week everyone contracted to the project was let go, apparently after a difference of opinion with the client for whom the work was being done. (Well no shit, right? They probably didn’t know what the damn “pauses” were about either!) So, after a wait through March and most of April to start work, I get dumped again in July, and in all that time… I only got to do six weeks and one day of paid work. I am applying for and interviewing for other work already, but this is one more speed bump I did not need.

* finding out who put the ram in the ram-a-lam-a-ding-dong was outside the scope of this project.

Then there’s the tablet. Oh yes, the tablet. In June, gohastings.com had a ridiculously good deal on eMatic 8″ tablets, with specs that outstripped the Nextbook tablet that I’ve had for a couple of years. Somewhere at the intersection of “it’d be nice to have more display devices for video loops at convention tables”, “it’d be nice to upgrade” and “HOLY @%&!, ONLY $36.00 EACH?”, I ordered two of them. (It should be noted that at the time, I still had a fresh paycheck in the bank. Man, I miss paychecks. So tasty. So crunchy.) They arrived, and were immediately put on their respective chargers.

One worked like a champ from the word go, and it’s a great little machine. I love it.

The other one would never take a charge. Not even after being left on for 36 hours. Trying to power it up would only result in a brief display of a “hey, something’s wrong with the battery” symbol on the screen before it shut down again. So: bum battery. Contacted eMatic for a warranty repair or replacement, and the proceudre was simple enough: put it back in the box with its goodies, send it back, they’ll fix it and return it. Right?

And then this happened.

We have received your device(s) in damaged condition (see attached photos). If this was the original issue, please disregard this message entirely. If a damaged device was not the original issue, or this unit was damaged during transit to our facility, your damaged device will be shipped back to the address provided within 5 to 7 business days from the date in which it was received, in the same condition in which it was received in.

Please contact the mail carrier used for shipment, in regards to any insurance claims to be filed for reimbursement.

Two photos were enclosed: one of the unopened box, and this one (click to enlarge, maybe you can see something I don’t). 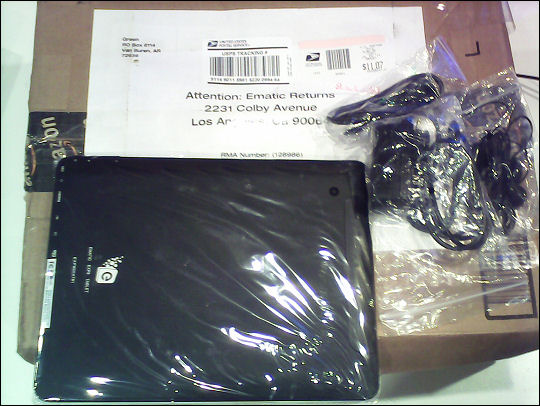 Given that it’s a blurry photo with the tablet still in the plastic wrap (into which I re-inserted it before shipping it back in its original retail box, which was then packaged in another box), I can’t see jack crap. For comparison, I took a photo of the eMatic tablet that I kept, which works fine, from the same angle – the back of the unit. 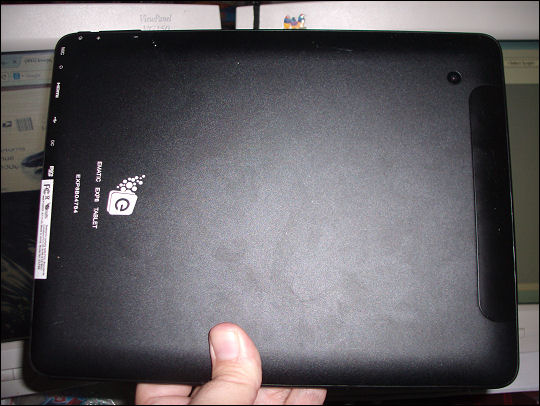 A second e-mail from eMatic arrived within three hours of the first.

We have received your device(s) in damaged condition (see attached photo). Unfortunately Ematic / Xovision’s warranty does not cover physical damages, such as cracked screens, cracked housing of the unit, or any water residue damage.

We have also determined that this was not the original issue and or reason for replacement. We will be shipping your damaged device(s) back to the address provided within 5 to 7 business days.

I’m still waiting for a response to my earlier e-mail:

Response: none. Note that I’m not demanding a replacement product, I’m demanding information. And still not getting it. So on the morning of Monday, July 21st, I sent this:

I am still awaiting a reply to my e-mail sent on July 16th and again on the 18th regarding this device. On the 16th you said you had received a tablet I returned under warranty, but it was damaged; I could not determine what the damage was from the two attached photos and asked for clarification or a description of the damage. That request has now been ignored twice.

The device was intact when I shipped it back to the address provided with the RMA number you sent me. If it has suffered any damage in transit, that is not readily apparent from the photos (one of which just shows the box, the other of which shows the back of the device still in plastic wrap). The device was sent back in its original retail packaging, which was packed securely inside another box.

Guess what? It’s time to pester @eMaticOfficial about when they’re going to reply to @logbookguy’s request for why the warranty on his device is not being honored.

…maybe, just for fun, you could join me (if you’re on Twitter). At this point, it’s not even about the tablet that I’m out all of $36.00 on (though believe me, as broke as I am typically, I would like my freakin’ $36 tablet). It is now about The Principle Of The Thing (referred to hereafter as TPOTT – actually, no, scratch that – stupid, stupid acronym). Before anyone asks: GoHastings no longer stocks this item (it was being clearanced out, so it’s probably yesterday’s tech, but for thirty-six freakin’ dollars I’m happy for it to be new to me); at best, they could only offer a refund on the $36, and the window for doing that has come and gone while I’ve been trying to get eMatic to just give me a freakin’ answer.

Last but certainly, not least, there is something wrong with my left eye. The eyelid and the corners – especially the outside corner – are red and irritated. The eye itself was extremely red, though I’ve beaten that back into submission with repeated saline washes. But the skin all around the eye is still very irritable and I am starting to have residual focusing problems. I don’t believe it’s infected, but I also don’t want it to get that way. And if it’s affecting my vision even slightly, yeah, let’s get this taken care of.

My wife recommended an eye doctor because he has seen her before on an emergency basis. I called and was told that, regardless of my issue and how urgent it may be, he cannot see me until August 8th. That’s the day before OVGE. GlitchCon is the weekend before. So let’s lay this out: I have a job interview Wednesday, a public speaking engagement the first weekend of August, and I’m running a table at another event the second weekend of August… and I’m doing all this looking like I’ve been stung in the eye by something?

Perhaps you can begin to understand my frustration. :/