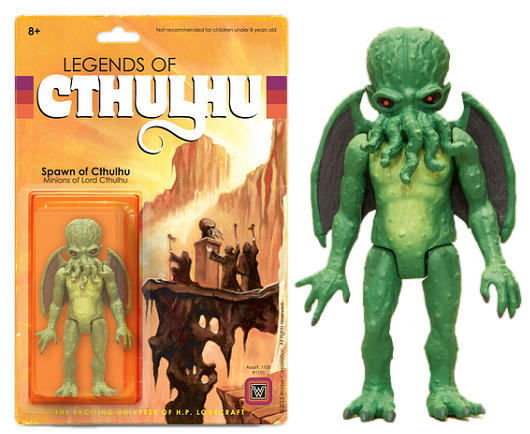 (Before going any further, those interested can find the Kickstarter here.) And at the same time, I realized that this has got to stop. The boutique, niche-interest toymakers of the world have got to stop tempting me with things specifically engineered to appeal to multiple flavors of retro nostalgia at once.

You see, the makers of the Legends of Cthulhu line are hardly the first to say “Hey, let’s make retro-styled action figures that never existed before, and are tantalizingly compatible with all that Star Wars stuff in Earl’s room.” Funko, the makers of the inordinately popular super-deformed-head Pop Vinyl figures, have a less widely distributed imprint, ReAction, which specializes in these things. 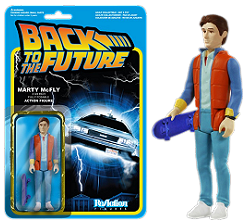 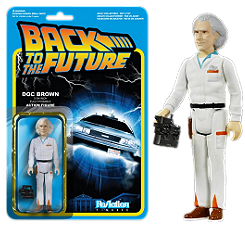 (George McFly and Biff, both from the ’50s, are also available.) 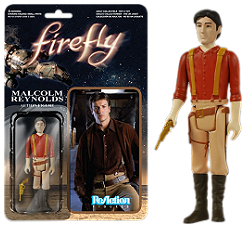 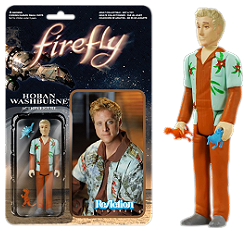 (Before you ask, nearly the whole crew is available, though Shepherd Book is conspicuous by his absence.) 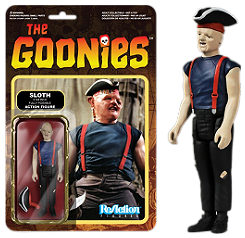 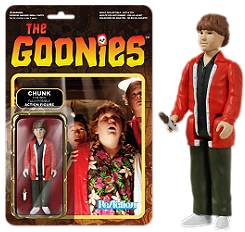 (Most of the other kids are available, but Chunk and Sloth kick butt, so who else do you really need?) 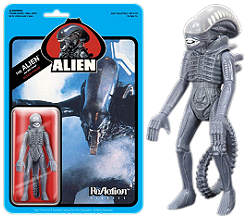 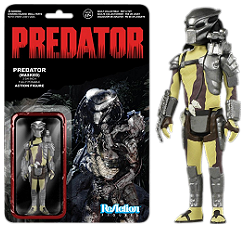 (Together again: the love that does not dare speak its name.)

Funko/ReAction’s other licenses include Buffy, Pulp Fiction, Escape From New York, and The Nightmare Before Christmas. If one 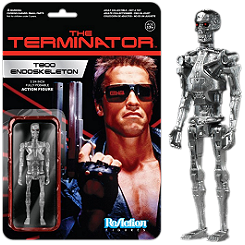 looks at the stuff they’ve licensed for Pop Vinyl, the mind boggles at the possibilities: Planet of the Apes, Game of Thrones…

“But Earl!” I already hear you saying exasperatedly, “These look terrible! Mal doesn’t even look like Nathan Fillion! Marty doesn’t even look like Michael J. Fox!”. But you see, that’s part of the charm.. The whole appeal of these is that they so strongly resemble the “look and feel” of Kenner’s late ’70s/early ’80s Star Wars figures. Same size, same articulation, and very similar packaging style. Same almost-generic faces with almost-neutral expressions. Most of the Star Wars figures’ resemblance to their human inspiration (if, indeed, a figure wasn’t a character with a helmet or a creature mask anyway) was in the “well, it’d look like him/her from a distance” category.

And here’s the thing: with the exception of Firefly, even if I went down this slippery slope, I’d only be collecting a couple from each property. The Goonies, for example: within the phrase “Chunk loves Sloth” is the whole heart of the movie for me. Those are the only two characters I need. Marty and Doc are Back To The Future for me. If they did Planet Of The Apes this way, Dr. Zaius and Cornelius calm my beef min. (Though if there was a Zira, I might make an exception…)

Ranges I’d love to see them try to get the licenses for, any of these wonderful little toy companies: Blake’s 7. Red Dwarf. 2001 and 2010. Krull. Fifth Element. Logan’s Run (the movie, please). Last Starfighter (it’d be criminal not to make the ship to go with the figures…). Silent Running (just make the robots!). Babylon 5. Farscape. Highlander. Lexx. They Live. Evil Dead. MST3K. Classic V. 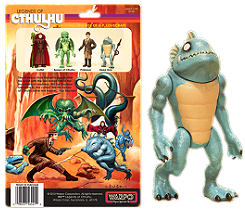 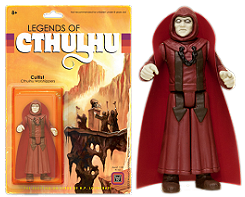 (I can’t tell you how “old school Star Wars” that human minion of Cthulhu is. Trust me, it’s a lot. Off the scale.)

Here’s the thing. With the limited articulation, limited number of characters, and simple manufacturing methods, the “retro style” figures cost their makers less. They take up less space than the current trend toward ultra-realistic (and ultra-accessorized, hence ultra-expensive) six-inch figures. And yet they’re no less fun. I am all for this trend.

I had a dream a while back, after seeing a couple of local retail stores go under (which, sadly, happens with alarming regularity around here), after which they put their point-of-sale racks out, empty, with fire-sale prices on them. My crazy idea was: get one or two of the “lazy susan” style POS racks, align the pegs so figures with this size card could be hung on them, and fill ’em up with a bunch of these “new but old” retro figures, just for kicks. Just to have something in the room that would catch the eye, like a little hidden easter egg in the corner (and in the same spirit as Rob O’Hara’s pegboard project, just on a less mind-melting scale). As the Star Wars “vintage collection” wound down, I even picked up several of those figures on clearance to start this project: 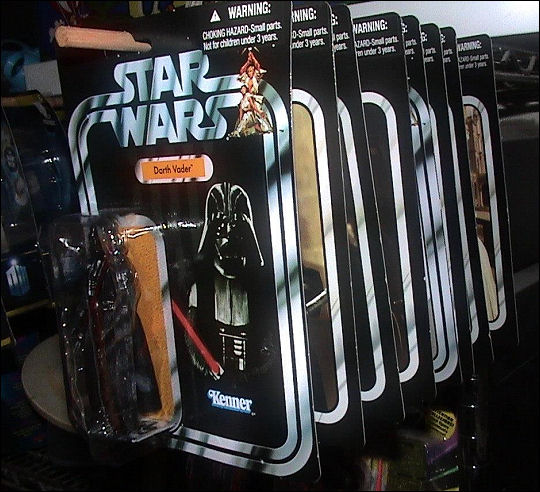 And some of them are characters from the more recent movies, done retro-style – delicious cognitive dissonance. 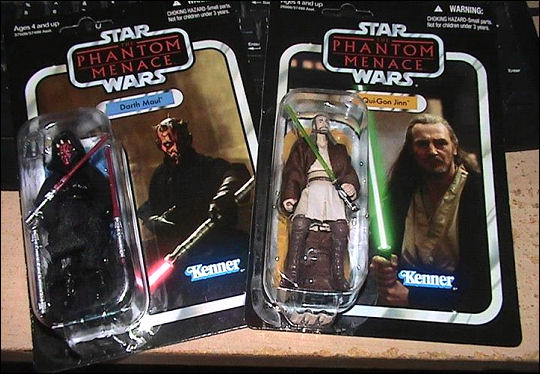 But after an initial investment that, believe it or not, topped out at around the $30 mark, that’s on the back burner for now. Money is a big consideration. So is all the other stuff that needs to be done in the house before Little C arrives to keep Little E company.

And yet they’re part of why I’d want to do this. Which seems cruel, doesn’t it, keeping toys in the house, in their packaging, that the kids can’t do anything but look at? And yet there’s a self-restraint/respect-for-others’-belongings lesson there. And maybe, just maybe, a taste of how the old man used to feel, walking into Service Merchandise or TG&Y way back in the day, and seeing that there was a whole shelf of new characters and spaceships waiting to be tried out… if only mom could be talked into… do you think she’d buy that?… naaaaaaah.

To this day, I keep a few unopened figures around. Some, like the Star Wars retro collection above, are meant to stay unopened. But there are other figures that I fully intend to open. Nothing lifts my spirits like opening an action figure. It’s just pure childhood thrill. Little E asks me why I have some that aren’t opened, because to him, that’s just crazy. (Then again, I’ve had to rescue my Ice Warriors from him before, on those occasions when they were drafted into compulsory service to provide backup for the Teenage Mutant Ninja Turtles.) The answer is: they’re being saved for those rainiest of days. Before you ask… yes, I am, as some family members so kindly put it, a grown-ass man. (The rest of me has grown as well, it’s just that over the years, my ass and my gut have grown more. It’s hard to find a suitable container for this much awesome.) I’m a grown-ass man with a very small number of hobbies that I keep down to a dull financial roar. When the household income is in dire straits, that “fun spending” goes out the window. I know the realities and, by now, I know the drill. I know what’s a necessity and what isn’t. 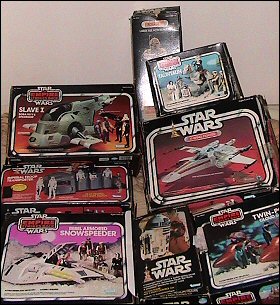 I also have these in my room. Just looking at them takes me back to a happy place in my head. Those who have nothing more to get off on than criticizing others should try finding their happy place sometime.

I can’t afford to support the Legends of Cthulhu Kickstarter now, alas (dammit!), but I hope it takes off like nobody’s business. (If this ramble through my latent toy-collecting obsession inspires anyone to pitch in, that’s awesome.) The inventiveness of the people behind it shines through in the photos of the prototype figures and in the hand-painted artwork. Even if I can’t afford it right now, I love it that stuff like this even exists. It makes me happy to know that it’s there. What could be cooler than little plastic minions of Cthulhu?

Maybe I could pitch these guys on an idea for a toy line I’d love to see: spacecraft, astronauts, and cosmonauts from various stages of the space race, from Mercury and Vostok through the shuttle and modern Soyuz. Not specific people whose likenesses would require permission (see, I just made it a lot cheaper right there!). And of course their spacecraft would be the real draw… how about it, guys? I’d be happy to write the back-of-the-box text…

Naaaaah, that’s crazy talk. That has got to stop. And so have all these wonderful retro figure collections! Unless of course they want to throw a brother some review items for his toy collecting website which has been dormant for many a month. 😉 But I’m not expecting to be taken up on that offer. In the meantime, carry on, retro(micro?)nauts, carry on.