Evan hasn’t been feeling great lately; on Monday, he was running a fever at day care, and there was a bit of a scramble because that’s one of the days that I go to work fairly early. The doctor said he had the flu, and of course even a solitary sneeze is treated as H1N1 these days, so it was Tamiflu time…and Evan had to stay home the whole week, which made my work schedule interesting. Fortunately, he’s got a new friend to help keep him company while he gets to feeling better. 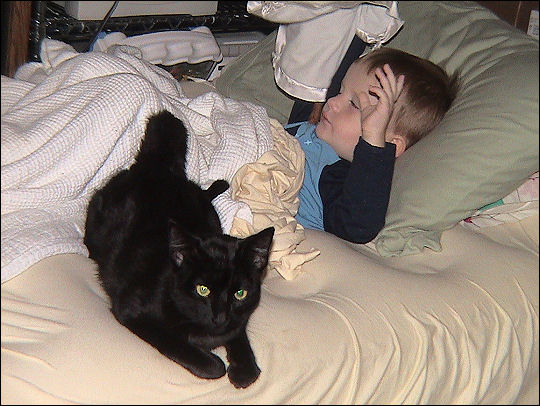 The new kitty is trying to settle in nicely; as expected, Oberon is the first cat to give the new kitty a break. They actually have a lot in common – we now have two stray cats and one humane society cat. The social class division is pretty obvious: Olivia, the humane society cat, still won’t have anything to do with the little black cat. Obi wants his territory respected, but other than that he’s accepting the new guy. 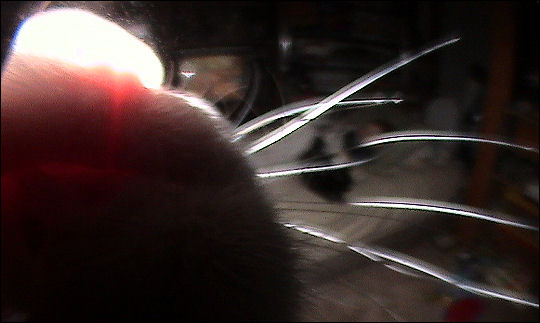 But it’s not all smooth sailing. When we got up this morning, it was pretty obvious that the new kitty had been in the kitchen… he’d broken into a loaf of bread and nibbled on it, and knocked some other stuff off the kitchen counter. This isn’t acceptable cat behavior, but (A) we’re on day 2 here, and (2) I think this is a testament to what kind of life this cat has lived. He’s probably dug through a few trash cans to survive. But he still has a very sweet nature, seeking approval and attention from us, so there’s still hope. He’s not completely feral; he’ll learn. 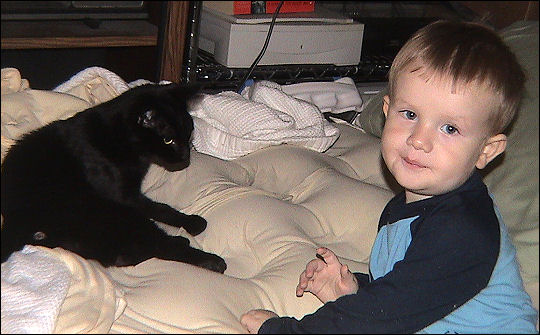 His first vet visit for shots and tests went well; if anything, Evan was more of a problem during that visit than the cat was! 😆 The kitty is free of disease, and got his first round of shots. He’s a bit on the skinny side, but Oberon is proof that we’ll take care of that. (Come to think of it, Evan is proof of that too.)

Now we just need a name… 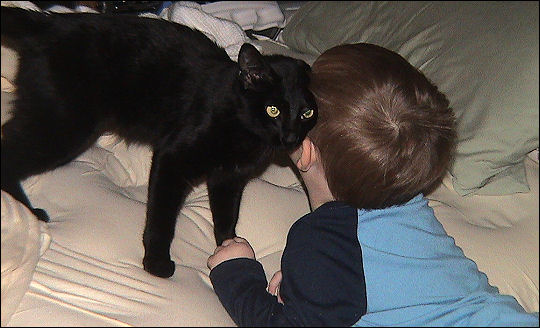