I’ve recently been liquidating more of my video game collection on eBay, and the thought never occurred to me “Hey, let’s turn around get moar video game stuffs with the moneys!” But I’ve made an exception here, and with good reason. 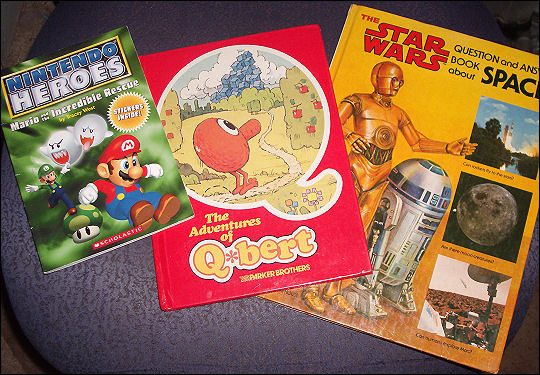 I recently acquired the two books on the left in the hopes that I can give Little E further encouragement to pick up reading for himself. He’s got the spoken vocabulary, but he’s being a little bit lax on learning to read properly; why should he, when daddy’s always there to read for him or to him? Even my attempts to get him to read with me and sound words out are exercises in frustration for all involved. He loses motiviation very quickly.

Two of the earliest books I still have from my childhood are the hardback Star Wars storybook and the Star Wars Question & Answer Book About Space. I forgot who exactly got them for me, but damned if that wasn’t about the smartest pairing of books I’ve ever seen anyone give a kid, anywhere, ever, on any topic. Star Wars was already my favorite thing in the world at the time; dropping the droids into a book about real space science and real space exploration was sheer genius. I’m still passionately interested in space exploration to this day.

The Star Wars space book desperately needs updating. At the time of its publication, Skylab and Viking 1 were still recent history, and we were getting ready to launch Voyagers 1 & 2. The shuttle hadn’t even been dropped off the back of a 747 yet to see if it could glide or plummet like a sack full of bricks. Pluto was still a planet. This book needs to be updated and put back on the market. You want a generation to get interested in science, robotics and math? You better get the Clone Wars generation while they’re still into Clone Wars, folks.

The other two books I was already aware of – when you go to shows and conventions geared toward video game collectors, you’re bound to run into one or both of these books. I had never acquired or seriously investigated acquiring either one before, until now. But Little E is still Mario-obsessed right now, and remains close friends with Q*Bert. Somewhere between these three books… it’s my hope to ignite something. He needs to want to read.