…than by adopting a new black cat? 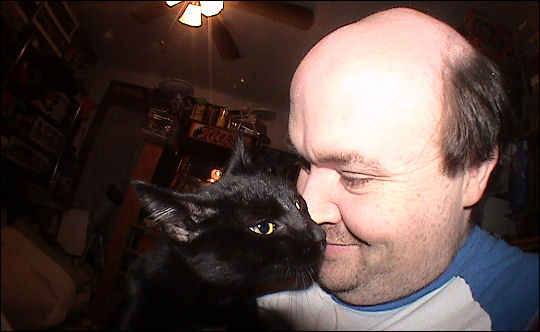 That’s not some newly-discovered picture of me with Othello. This is the new guy. On my first night at my new job, this kitty showed up and was brought inside. (I have a co-worker who’s kinda like me: he can’t stand to see animals dumped or lost. This may explain why he and his wife have 14 cats and 4 dogs.) Once the kitty saw me, he headed straight for me – clearly, my 50-foot-fall SUCKER FOR CATS neon sign is still in operation. 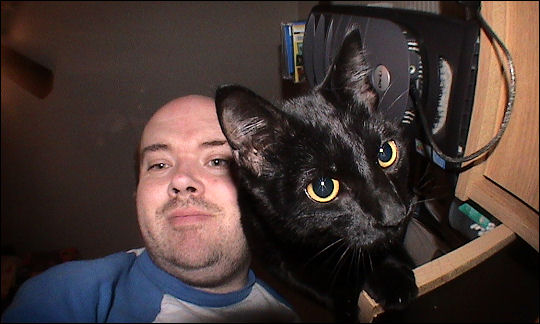 I finally picked him up tonight – there was a bit of a delay in retrieving him from my co-worker because Evan’s been down with a very mild case of the flu this week, but of course the doctors are going “H1N1!” everytime someone sneezes. Evan’s been home all week as a result, mostly hanging around the house, playing, eating a lot, and getting cabin fever more than any other kind of fever. He’ll be back at day care on Monday. 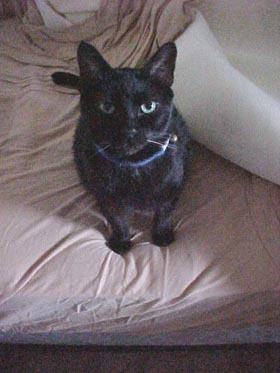 The resemblance to Othello is… uncanny. It really brings me up short sometimes. It’s easy to say “Well, of course the resemblance is uncanny. He’s a cat and he’s black, as opposed to being a aquamarine-polka-dotted duckbilled platypus.” But there really is more to it than that. One black cat does not necessarily look like another. And this little guy (and yeah, he is most certainly, unmistakably a guy) looks like Othello (seen at right). A lot.

This doesn’t mean that I’m expecting him to be Othello, of course. For one thing, the new kitty is extremely clingy and lovesick – if he had people before, he’s been without them for a long time and misses them. He was constantly trying to cuddle with me on the drive home (to the point that I had to use one hand to hang on to him and hold him still against my chest, otherwise he would’ve happily rubbed all over my face the whole time – I’m not sure the cops would buy that as a valid excuse for having an accident. Once he settles down and realizes that this is his home, and that this motley assortment of people and fellow cats and one dog are his family, and that he needn’t wander anymore, I think he’ll become less clingy with the smotherly love. 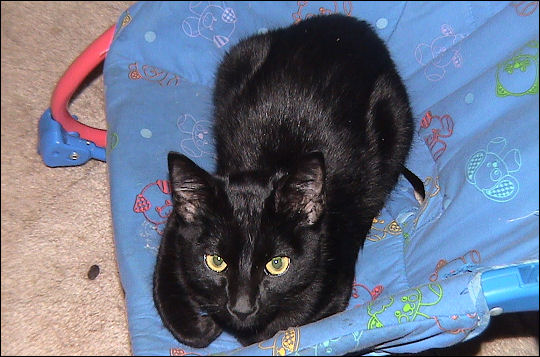 And hey, get off my Avid keyboard. (Heh. That’s very Othello.) 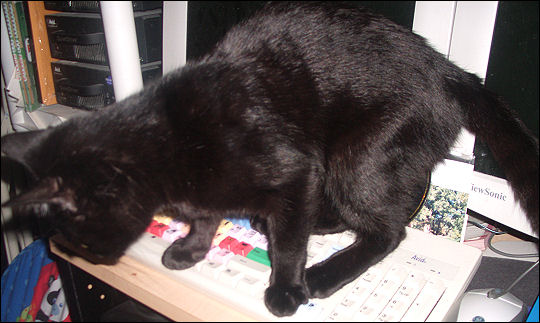 One thought on “How better to celebrate Friday the 13th…”