I’m about to keel over here from exhaustion, so here’s a cute picture of Oberon and Xena: 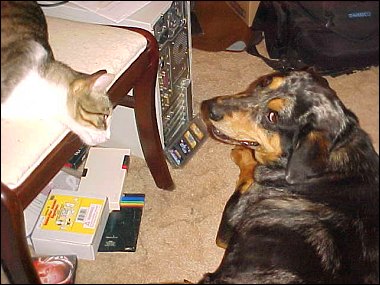 Actually, no, I’m not just going to leave it at that. My wife and I spent the afternoon at my dad’s house, because we haven’t been to see him in ages, and because we wanted to show him the ultrasound video and personally deliver the still pictures. My stepmother was there too… ’nuff said. Still, it was pleasant enough visit, and I’m hoping we can have an even more pleasant one in the near future. (‘Nuff said.)

A less pleasant part of the day was finding out that my wife’s vehicle, which was in for one more minor repair, now requires one more major repair. The repairs don’t seem to come in flavors of under $600 or so, so I’ll admit that the word “lemon” has been rolling off my tongue quite a bit lately. It was a good deal when we got it, but I’m starting to think this was a set of wheels with one good year of service left in them, and we’ve passed that year. Long since passed. The constant surprise problems we’re getting have completely eliminated any kind of “backup for a rainy day” that we had built up, and when we need to be buying baby stuff and working on redoing parts of the house, that’s just absolutely killing us.

I’ve been spending a lot of time on GreenhouseFX.tv over the past few days, including working up what’s basically a print version of the website to distribute as a printable PDF.

I’m having one of those weeks where I wish I could declare my own by-week and just catch up with the rest of the world later. Too damn tired to even think about thinking about thinking.

Now that I’m done cooking up the food we’ll be nibbling on tomorrow during the day, I’m going to go get…well…maybe all of a couple of hours of sleep.