“So that’s it?” you’re asking. “No posts in over a month, and you post a picture of a stupid frog?”

Well, yeah. Something like that. Sorry I’ve been absent from the blawg. I’m on a new work schedule that, while it has the advantage of making my home life a little bit easier (i.e. I actually get to see more of little E than just 45 fussy minutes in the morning before he gets hauled off to day care), also completely sucks the life out of me. I’m working hours that wouldn’t have fazed me in my 20s, but I’m around the corner from 40 here. I’m tired beyond comprehension by the time I get home.

And once I am home… well, let’s just say we’ve run into some behavior problems with the little guy. The tail end of the terrible twos is going to be the death of me. I try to reason with him, but in the end it just seems like I have to become the Acme automatic spanking machine rather than being dad. He winds up wanting me to get the hell away from him. I wind up wanting to get the hell away from me too, for that matter. And after I’m doing being worn down by that whole experience, which seems to be turning into a nightly visit to hell… well, then I’ve got to go back to work, and I’m already pretty much fried.

One of the behaviors we’ve had to try to correct is the little guy’s tendency to get out and wander during the night when he’s supposed to be in bed sound asleep. Coming home from work and finding the following picture on my digital camera pretty much sealed the deal: 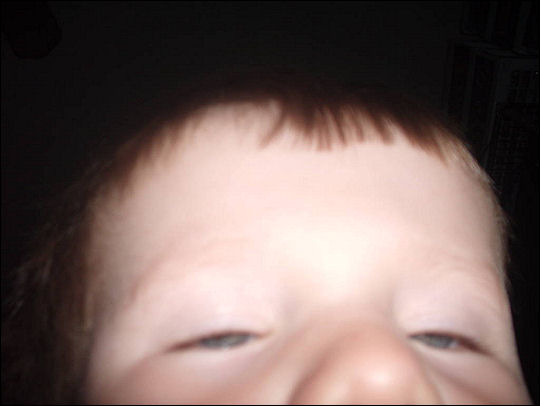 …so now there’s one of those little things on the doorknob inside his bedroom that keeps him from opening it from the inside. At least until he figures out that there is, in fact, a way to do it. I give it about three weeks tops before we have to just give up and attach a live electrical wire to the other side of the doorknob as a deterrent.

Still, both of little E’s grandmothers’ fathers were professional photographers, so someone, somewhere, is probably fiendishly pleased with the above development. 😆 This also explains why the previously monthly ritual of getting a new daddy-and-Evan picture has dried up for right now – it’s hard to get us both in the same shot, in a decent mood, at the moment.

Outisde of that, I’m devoting whatever time I can to getting Vworp! ready in time for OVGE this October. Given the schedule I’ve described above, it’s going to be a very tight squeeze. Whenever I get “Vworped out”, I try to put a little time into laying the groundwork for the next book, which will be – prepare to gasp in surprise here – Phosphor Dot Fossils. PDF is going to be a very “designed” book; I thought Vworp met that description enough as it is, since I put a heap of prep time in on the layout at the same time as I was writing text, but PDF will be even more “designed.” The design will owe a little something to the screen layout on the DVDs, but will be more print-friendly. The first PDF book will be a combination of the encyclopedic review format that everyone might expect from the DVDs… and something else entirely. Vague enough for you? I might have some preview material at OVGE… emphasis on might. There’s this whole other book that I need to have ready first. :shocked:

As for where I’ve been, Ive been putting in a lot of time talking to myself in theLogBook.com Forums 😆 …or at least it seems that way sometimes. First sign of madness, they say. I haven’t really consciously given up blogging in favor of the forums, but some of my geekier observations are better suited for the forums. At my 20th class reunion a month ago, a lot of people commented on how they missed me blogging more often, Facebooking more often, etc. etc.; I appreciated that. Being dad always comes first, but I will try to make more of an effort to post a few things here. The geekier side of the stuff I used to blog about – upcoming soundtracks, action figure collecting, that sort of thing – will likely be a creature of the forums in the future, while the blog will revert to being more about what’s going on in my life outside of all that stuff that I can’t really afford. 😆