If you have any strenuous objections to Doctor Who or an incredibly silly bit of creative geeking-out, best not to click this link:

There’s a Doctor Who forum that I visit that always seems to have cool contests and things going on in the toys & collectibles subforum, and I always get caught flat-footed by these things: there’s always a time limit and I never have the time. So I thought I’d set myself a challenge, to be met at a leisurely pace, and maybe by the time it’s done I’ll have something for the next contest. Or not. Who knows?

Here’s where it gets silly: there’s a whole subculture of folks hanging around the toy subforum who do “comics” with their various and sundry figures. It’s a cool idea, but to be kinda blunt, I find the execution….lacking on most of them. Either in terms of story, dialogue or visual style. It winds up being a transcript of someone playing with their toys. Which, to be sure, is exactly what it is – even if I’m doing it, that’s what it is. (And hey, that’s about as much “play” as my collection gets – at least until they’re inherited by the little E.)

But I wonder why nobody goes the whole hog and doesn’t use their miniature photography as the basis of something more artistic, rather than just slapping cartoon balloons up on a bunch of blurry photos. Maybe try to do something that has enough style that you can forget it’s all plastic. So I messed around a bit today with that idea. 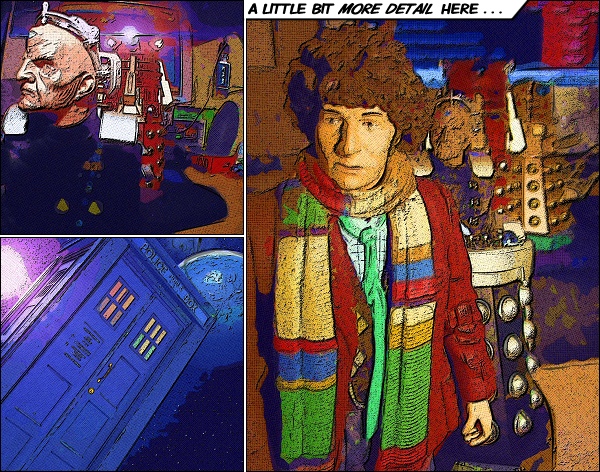 These are photos – not even particularly good or well-composed ones at that – run through a series of filters and recombinations in Paint Shop Pro. The TARDIS shot is actually done in 3D Studio Max and put through the same process. I had quite a bit of R&D to see how much detail I could maintain while at the same time putting enough of a “wild” element into it to make it look drawn/painted. I think this is about the happiest medium that can be reached; everything else I tried skewed too far to one extreme or the other – barely-retouched photorealism or so wild as to be impressionistic. 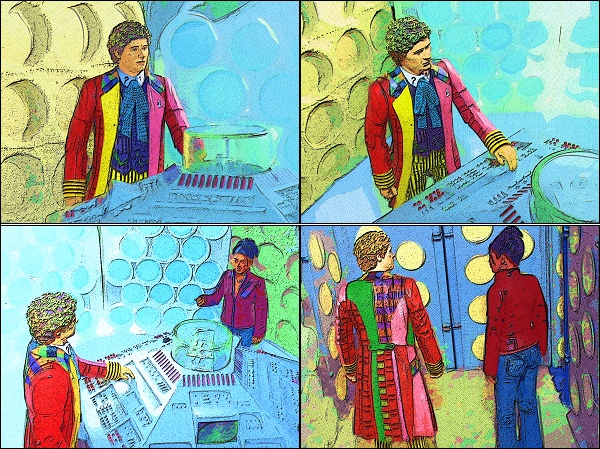 (The TARDIS scenes are done with everything at my disposal – “real” TARDIS walls from the 1988 Dapol playset, the clear containers of bottle caps that I’ve been using for 10+ years in Toybox, and some packing material with a surprisingly TARDIS-like motif. I think I actually like the packing material – which here winds up looking like yellowish walls of symmetrial, non-staggered circles – the best.)

So, for all of this work – actually, not that much work, maybe an hour total for all of the setup, photography and processing – am I going to do anything with this bizarrely cheap way of cheating a comic together out of nothing? Maybe, maybe not. I like the idea of doing something with the technique, but I’d stop just short of calling myself any kind of artist as a result – I didn’t sculpt or paint the figures, I didn’t manually draw or color anything, and the process of creating the artistic “look” is down to a science.

By the way, these are very close cousins of some banners I cooked up for the site back in 2003 for Doctor Who’s 40th anniversary:

…which were two of the most commented-on things in the history of the site, ever. They were similarly treated photos, nothing more, though they suffered for being stuffed into an almost infinitely smaller space. They also suffered from there being no actual story, and it went no further than that. I’m afraid that if I tried to start this thing again, the same thing would happen again. I’m not a big fan of my own miserable attempts at fiction, which is why I spent a Saturday in November on action figure photography instead of struggling mightily to turn in something non-dismal for NaNoWriMo, so it’s easy for me to grow disillusioned with the whole thing. Maybe I should do occasional little vignette pieces, more character/dialogue oriented than anything with the kind of plot most people demand from Who. It might be a better idea still to find someone who has a story worked out (and a bigger toy collection than mine) and has the time to do the photography and scripting, and I can just go in and…well…make it look like the stuff above. Or just release the “secret recipe” for the look so other folks can screw around with it and actually make something enjoyable and non-boring.

I may try some more stuff in the future – I’d like to play with it some more on a no-budget level, just using found objects out of context as backdrops/set pieces, and see how far I can stretch that side of the illusion.

There’s a neat idea in here somewhere…but maybe I’m not the one who necessarily needs to be coming up with the story.

One thought on “Contents: total geekery-outery”