Another one I haven't seen in - ha! - a dog's age. What comes swimming up to the surface:

I'm trying to remember why these seemed to be in a little window all the time.

Definitely Jules' voice there again at the end. Good grief, but we were all so young.

They get bigger? Really? (That's what she said.)

Here's where the story gets both funny and sad. Hey, kids! Want to know why you really couldn't adopt this kitten? 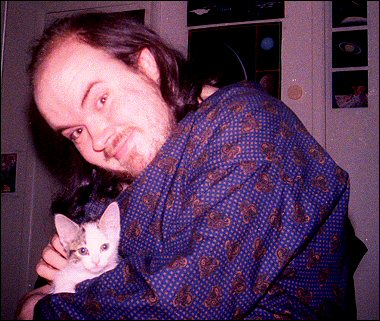 Because Explorer Earl adopted her! What a lying bastard! You never had a chance to adopt April.

This was a week after my mother's cat, Casey, died; Casey had moved to my apartment with me when I left home. But since she could no longer go outside when she wanted, she kinda lost her will to live; she died within a year of moving. She was 14 years old, so it wasn't a total shock.

I renamed April "Thisby" after the female character from the play-within-a-play in A Midsummer Night's Dream. Thisby was the first Shakespeare Cat. Every cat I've adopted since Thisby has had a Shakespeare character name.

Thisby died two weeks later; it turned out her entire litter was diseased. There was nothing I could have done. Having had two cats die on me in a month, I went without feline companionship for a while, and then wound up having another cat given to me.