Even though my next paycheck was more or less spoken for, I decided I’d pull the trigger and buy that Yeti if it was still there on my next payday. And it was. And now it’s mine.

Oddly enough, the microphone was the last item in a list of things I had acquired over time in anticipating of getting a Yeti at some point, including a woefully weak seven-buck mic stand and a clamp-on pop filter. The mic stand…well…not sure you can really expect more for seven bucks. It’s flimsy, and no matter where you put the counterbalance, the thing is simply overpowered by the weight of the Yeti. It also does not have a universal mic holder thread attachment as advertised, so instead of taking the Yeti off of its desk stand and mounting it directly to the stand, I had to…um… improvise. 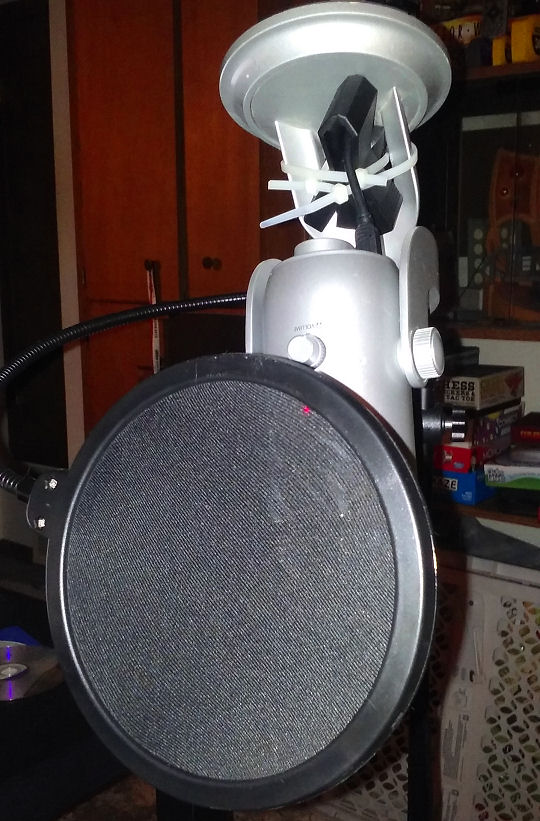 To be fair, the weight of that desk stand is probably playing a huge part in overbalancing the mic stand. The Yeti needs a shock mount, but Blue has figured this all out – the Yeti has a fairly unique diameter, so not any stand or shock mount will do, and Blue is ready with custom items for which they charge a premium. I get it, that’s part of the business. The shock mount costs nearly as much as I paid for the microphone itself…so the shock mount will have to wait.

The recent death of a standing oscillating fan at my house may have provided an upcycling solution to the mic stand problem, however – it has a wide, weighted base that I may simply drop the shaft of the mic stand into for the time being, until a more professional solution drifts into the weak gravity well of my current budget for not-absolutely-necessary expenses. (And let’s be honest – I’ve worked at radio stations and TV stations whose audio recording facilities were more cheaply kludged-together than this setup. If you don’t hear that cheap in the finished product, that’s all that matters.)

Which brings us to the side-by-side comparison. 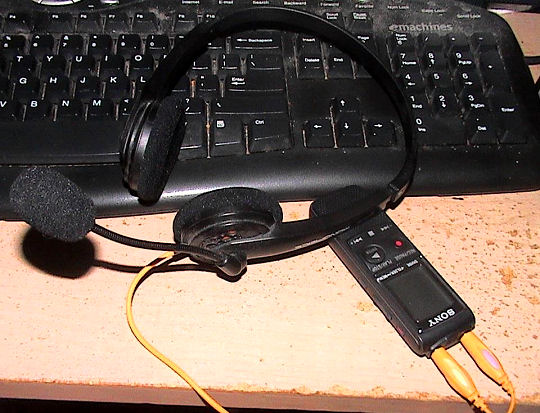 Old photo – that desk and that keyboard have been replaced too.

This was my old audio recording setup: a portable voice recorder and a gaming headset. The recorder had a bit rate “ceiling” of 128kbps – it’s meant for recording meetings and lectures, not for real audio work. The headset mic improved on the sound quality that the recorder’s built-in condenser mic offered, but only so much: a normal speaking voice simply overpowered it, because the furthest away I could place the mic, even if I angled it up and away from my apparently overwhelmingly noisy piehole, was literally the end of my nose. I’d wind up having to knock everything down by about 5db, and between that, the recorder’s unusually high noise floor (remember: meetings and lectures, probably from across the room), and the built-in limitations on audio fidelity, the result was a very crunchy, compressed sound, like I was trying to win the Loudness War with my podcasts.

Let me pause here by saying that: I’d rather still be podcasting with that setup than not podcasting at all. That anyone was listening at all was a testament to the patience and interest of the audience. I have to give a shout-out to two friends who provided different parts of that setup: Mark Holtz sent me the headset one Christmas (along with a non-wireless router which I still use to this day!), and a Best Buy gift card from John Morrison at around the same time bought the recorder itself. I was unemployed at the time, and even when I wasn’t unemployed, I was more than happy to be using this setup. Its portability is one thing the Yeti setup can’t match, at least not until I get some serious USB extension cables. Many podcasts were recorded in the bathroom with the door closed while the kids slept with that headset setup. And none of it’s being thrown away – there are “field recording” applications for that gear. It’ll no longer be used to record the “guts” of my podcasts, but you probably haven’t heard the last of it either.

But on sound quality, the Yeti (recording directly to hard drive as WAV files via Audacity) has the headset beaten to bits. 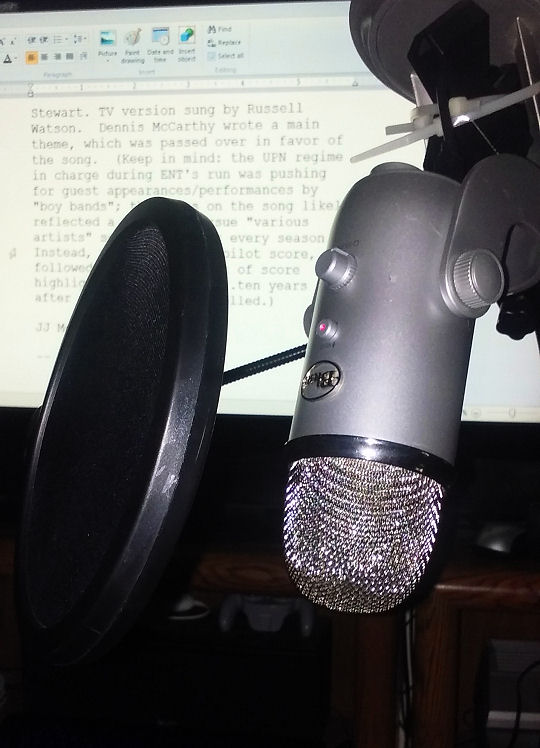 Now…because of my annoying habit of recording stuff out of sequence (I have “season outlines” for my podcasts, and sometimes the notes for the December installment come together before the notes for the August installment)…there will still be a few podcasts done entirely on the headset. The last In The Grand Theme Of Things recorded with the headset will be appearing late this month, but the last 100%-headset Select Game will be the “Christmas special” due in December. There are also a few gameplay segments recorded with the voice recorder that will see the light of day in future episodes, possibly as late as next year.

And the Escape Pod, you ask? As I record the next round of refreshes for that show, I will be completely re-recording the affected episodes from top to bottom. But that’s not the only big Escape Pod news. He said. Cryptically. Stay tuned.

I love the Yeti. It re-energizes my urge to sit around, talk to myself about stuff I like, and let you folks listen in. It emboldens me on presentation, because – this is going to sound like a ’50s horror movie – I was a teenage radio disc jockey, and used to do crazy stuff on the air. Crazy stuff like funny commercials and impersonating Yoda and Robin Leach and John Cleese and Elvis and HAL-9000. I’m more likely to shed my self-consciousness if I’m assured that these Stupid Radio Tricks will sound the way they do from inside my head when you hear them. The Yeti is worth every penny I paid for it, plus every penny that I escaped paying for it by virtue of it being marked down. I’m not one to point to things and say “they’re meant to be”, but the fact that an almost minty-fresh Blue Yeti sat on Amazon for well over a week, tempting me and yet waiting patiently for me, without anyone else snatching it up…might just be a sign from the universe.

Next up: getting a voice demo reel ready so I can climb back into the freelance voice-over arena. I don’t brag on anything but my kids very often, but you know, I have a halfway decent speaking voice that used to be bread and butter. It can be again. I could get business cards printed up: “EARL GREEN – I talk purty“.

But in the meantime, thanks to everyone who put up with me while I was sitting in the bathroom with a gaming headset plugged into a portable voice recorder.