I think I may be the only person, at this point, who looks over to the left side of the screen (assuming you’re looking at the actual Scribblings page instead of crossposts on Livejournal or Myspace, or the RSS feed box I’m trying out in a couple of places, etc.) to see what I wrote on this date X years ago. Over the past month, I’ve become almost obsessed with clicking on that for myself, just to see who I was, where I was, and what I was doing this time a year ago, before I assumed my new superhero identity* of Evan’s Dad. Today’s entry from a year ago is especially interesting to me in that regard, in that it illustrates a frustration that is simply no longer a part of my life. Man, how I don’t miss that place. As distressing as I’m sure it is for anyone still working there, it heartens me to some degree that everyone else working for the person in question followed me out the door within the past year. That validates it to some extent – it wasn’t just me.

But enough about that place. For some reason – possibly the combination of lack of sleep and being in the house too much – my creative juices haven’t been so much in overdrive as they’ve just been pouring out of every orifice in a viscous ooze. This is behind the sudden burst of stuff like the Doctor Who DVD covers and, now, presented to you here for the first time…my idea for an Odyssey2 homebrew game.

First off, I should point out that this is far from the first time I’ve suggested such an outlandish thing. Once upon a time in the ’80s, I sent Magnavox a hugely detailed letter, complete with graph paper drawings of O2-style graphics, detailing several game ideas, including a proposal for an Odyssey2 version of Fantasy and an overly complicated pitch for Smithereens! II!. I also asked about that super duper new Odyssey3 that was coming out, implying that if they sent me one right away, I could get to work on programming these fancy games I had ideas for. I got this letter in response:

(Unspoken legalese: please don’t send us game ideas that are too good not to use. You’ll have to sue us when we use them.)

Nowadays, I realize that my math skills were never quite up to par to really get into programming beyond BASIC. I tried my hand at games in BASIC, but never got into the assembly language side of things that you need for any kind of real speed, and my BASIC games languished in Taipan-by-way-of-Infocom territory. But there are incredibly talented folks turning out O2 homebrews today, and so I hereby extend to them an invitation/plea/outright beg to help me make this one a reality.

First, a bit of background. Evan has a penchant for launching his pacifier across the room at incredibly high velocities. This phenomenon, and the subsequent mad dash to retrieve and thoroughly clean the projectile in question, has become known as a Binky Blast. Evan is therefore the Binky Blaster. He’s got a little bed thingie that keeps him from rolling off of a table, bed, etc., which I’ve taken to calling the Binky Blaster Command Center 5000 Action Playset. Um…maybe I should just stop there.

Anyway, the name of the game is Binky Blast!, and it’s a mishmash of elements from two games which, by total coincidence, both concern balloons: Kickman and King & Balloon. To illustrate the basics of how it’s played, I’ve slammed together a completely illogical montage of graphics from different O2 games, chiefly P.T. Barnum’s Acrobats!, complete with zoomy graphics right out of the average O2 instruction manual. 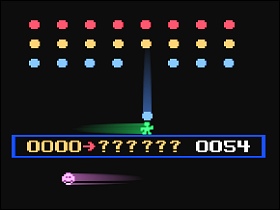 Binky Blaster is the smiley face at the bottom of the screen. He moves back and forth, hurling his binky skyward in an attempt to dislodge a bottle of milk. You can do one of two things: catch the binky as it blasts up from underneath you, which sends it back to the baby for another attempt, or catch the falling bottle that the binky hits. (The binky can miss completely, but, as is the case with the real Binky Blaster, he has an infinite supply with which to take another shot.) It’s worth pointing out here that you have no control over the baby (tell me about it!) – you’re just the poor clod who’s trying to catch stuff as it flies or falls. 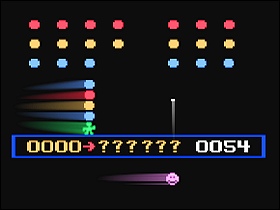 Every once in a while, you’ve accumulated so many bottles that your next move must be to catch the binky. If you successfully catch the binky with bottles balanced on your head, the bottles go to the baby, who keeps smilin’ about the whole thing. 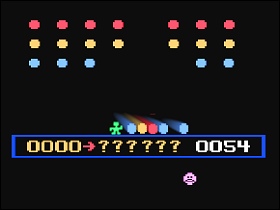 Failure to catch the binky will mean that you’re now trying to carry more bottles than you can balance, and it all falls down. Baby not happy. Start over.

I’d like to think (yeah, I know, dream on) that this wouldn’t be an overly complicated game to do on the O2. But then again, it’s way too complicated for some oaf like me who doesn’t have the coding chops for it, so go figure. The Odyssey2 doesn’t have a Kickman-like game in its library, and for some reason, in whatever fever dream this game concept came to me, this struck me as fulfilling the O2’s traditional mandate of “copy an arcade game, but change things around so we don’t get sued”.

So…who out there wants to help out with Binky Blast!?