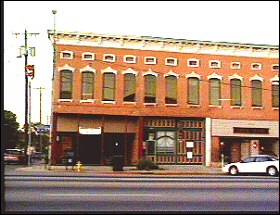 About a year and a few months after moving out of my parents’ house and into my first apartment, I decided to find my own place, something that was a little more my style. There were good reasons and bad reasons at the time, which I won’t go into here, but where I wound up moving into was Apartment #2 above Old Town Grain & Feed, a nightclub just on the other end of the block from Pharis Broadcasting, which is where I was working at the time. I was now only a minute or so away from work on foot, which was both a big help considering that my car was in terrible shape and I could ill afford to get it fixed, let alone replace it, but that proximity to work was also one of the dumbest things I ever did to myself. Above is the exterior of the building. My apartment started at the third window from the left, and ended at the sixth. At below, you can see basically the view you would see when you walked in the door of my apartment. Prepare for a voyage into a very geeky early-twenty-something mind. 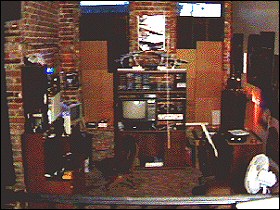 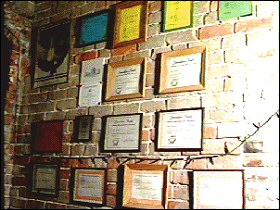 Yes, that’s a string of Christmas lights nailed up to the wall. Yes, there were Christmas lights all over the place – my cheap form of mood lighting back in the days before rope lights. It’s a wonder I didn’t set the place on fire, honestly. The wall of awards was immediately inside the door to the apartment, some of them dating back to junior high drama department stuff. I’m sure this says something about my state of mind at the time, and I’m sure that what it says isn’t pretty. 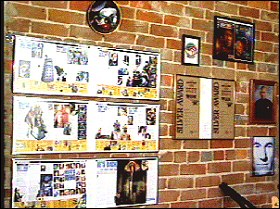 On the other side of the doorway to the bedroom and bathroom, an only slightly more dignified display: the history timeline pages (framed) from the Doctor Who 1996 movie special edition of the Radio Times, a few Trek odds and ends, and the two Addy Awards I had recently won. At the bottom right of that picture, you can see the handrail to a spiral staircase that led down to the living room area. 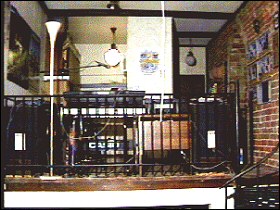 Here you can see the view from the living room looking back toward the front door and the tiny, tiny kitchen. (The white thing dangling in the middle of the picture is a coathanger – the walls from floor to ceiling in the living room area were easily about 16 feet tall, so I had to snag the cord of the ceiling fan with something or I’d never be able to reach it.) 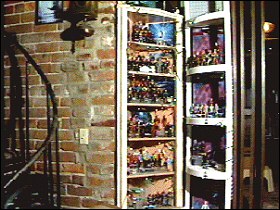 Just past the staircase was a large open doorway leading to the master bedroom area; there were accordion doors on tracks that could be used to close the bedroom area off, but some of the doors had apparently disappeared before I moved in. I filled the gap with a couple of corner shelves loaded with – you guessed it – Star Trek action figures and Christmas lights. Is this apartment screaming “chick magnet” at you yet? 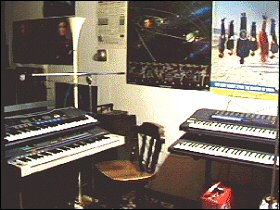 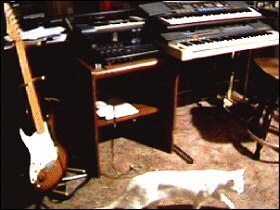 Back up the stairs, the carpeted area next to the railing was meant to be a dining area. So naturally I set up my home studio there. In the picture at right, you might spot Iago, age two. 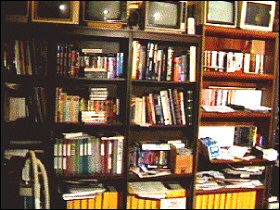 Here, more or less, you see the longest wall in the master bedroom area, loaded with bookshelves…and a shelf full of working Apple II computers (which were driving the row of monitors sitting on top of the bookshelves). An embryonic version of my future game room can be spotted here too, with a shelf devoted to the Coleco tabletop arcade machines. My cheap-ass plastic dining room table was in here, though it was more of a work area (I was taking night classes at the time) than an eating space. We’ll get to the slabs of cardboard covering the windows in a moment. 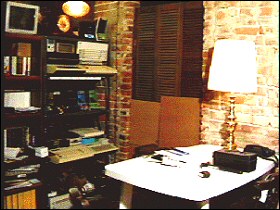 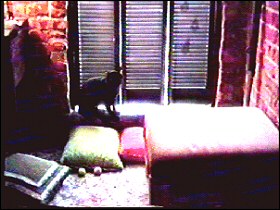 To the right of that table, a footstool and a bunch of throw pillows that I had inherited from my parents’ house became a corner for the kitties. (Othello, also around two years old, can be seen here, along with cat toys in the floor.) I was working such long hours at this point that I felt I owed it to my catboys to make this as much their environment as mine, and they seemed to appreciate it – they both spent a lot of time there. You’ll note the lack of window covering here – I would routinely open this window for the cats. 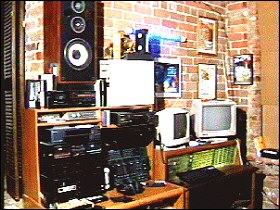 On opposite walls in the living room area, my computer (such as it was at the time – I think it was a 286 cobbled together from spare parts at the station when one of the engineers took pity on my XT) and A/V equipment could be found, and behind me, my CD collection at time and my Odyssey2 collection, proudly displayed in a broken stereo cabinet liberated from a friend’s moving sale. The Odyssey was hooked up and ready to play, too. Some things never change (see also the barely-hidden colored lights and the circuit boards at my desk, backlit by a fluorescent tube). 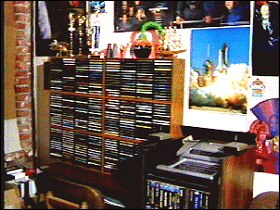 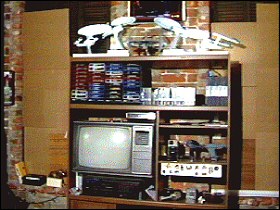 My entertainment center held the TV and copious quantities of Star Trek toys, only a few of which I still have today. Finally, about the cardboard squares over the windows: I tended to spend just about all of my spare time at home alone, not wearing a whole lot in the way of clothes. The problem with the louvered windowshades was that people on the sidewalk below could look right up into my apartment. And living above a bar, where people congregated outside to smoke, drink and occasionally vomit (you’d be surprised how many times I actually got to witness that), there were plenty of opportunities for this to happen. I seldom opened the windows anyway, so this was my solution.

I really liked the Old Town apartment, though I hated the noise and smoke from the bar. When I first moved in, I was on the overnight shift, so my biggest concern was the noise and smoke bothering my cats, because I simply wasn’t there during the bar’s business hours. Later on, when I was put on the day shift, it became a big problem, especially since both bedroom areas (there was a smaller one not shown here, which is where my actual bed was) were over the bar. And of course, the 1996 tornado knocked the hell out of the building.

I cringe at some of my ideas for decor and display in retrospect – I was really at the age where I was at the height of my sci-fi geekdom, with my future game-collecting proclivities also peeking around like a “Where’s Waldo?” cartoon – and I’d like to think that if I had this apartment now, I could do something positively spectacular with it. As it is, and keeping in mind that I was dead broke at the time, I really went kinda ghetto with it. I finally moved out of Old Town when it came time to relocate to Green Bay, Wisconsin. All of the furniture seen here went with me, because I had no idea if I’d ever be able to replace it.