A curious thing happened after the diehard-fan-pleasing first wave of “classic” Doctor Who figures was released in the summer of 2008: absolutely nothing. Fans who expected the range – focusing exclusively on Doctor and adversaries from the original series – to make enough of a splash to merit a second wave at Christmastime were a bit disappointed with the outcome. Now, to put this in perspective for future collectors who might be reading this years from now, the Doctor Who toy range at this time had a worse enemy than the Daleks: namely, a recession that hit economies around the world. The average consumer was suddenly pulling back and making fewer frivolous purchases; in light of that development, Character Options also held off on further additions to the Doctor Who toy range. The only new arrivals in the early part of 2009 were the figures comprising the Ages Of Steel mini-range of Cybermen.

But not long after the Cybermen wave was revealed, another announcement was made: the first two Doctors, each packed with a classic adversary from their respective eras, would be available… but only as exclusives sold at the 2009 San Diego Comic-Con, or, in the case of the UK, from a specific online retailer. A limited number of each would be made, and each figure set would be available on both color and black-and-white variations (reflecting the reality that both of these “eras” of Doctor Who were never filmed or broadcast in color). A third figure would also be made available, a variant of the already-released sixth Doctor in a repainted costume which had only “appeared” in animated webcasts and audio dramas.

The first Doctor, as played by William Hartnell, was released with a unique black Dalek – billed on the packaging as the “Saucer Commander” – seen only once, in 1964’s The Dalek Invasion Of Earth. Still in only their second appearance, the Daleks’ means of generating power was still being made up as the show went along by the writers and designers, and as such, this Dalek has a “power receiver dish” on its back that’s unique to this story. The rest of the Dalek is simply a repaint of the existing modular Dalek figure design (covered in more detail in this review). My beef with the dish is that it’s very flimsy and easily bent out of shape; I’m not expecting Comic-Con exclusives to be handed over to the kids for day-to-day play, but this is a case where the act of just releasing the Dalek from the packaging can mangle the dish.

The Doctor himself is a striking likeness of the late, great William Hartnell (click on any of the photos on this page for a full-size view, but be warned that those are rather large files), down to the tiniest details: his signature blue ring on his right hand (which accumulated numerous powers and functions as various stories demanded), his gnarled walking stick (which I wish was made out of something other than Character’s usual choice of a very malleable PVC plastic variant), his piercing eyes and long, flowing white hair. Due to the bulk of the Dalek included with the first Doctor, the blister bubble on this figure’s package is simply enormous – I’m not sure the angle of the above photo really gets this across. It takes up a good deal of space.

The second Doctor is easily the best of this year’s exclusives, a simply stunning sculpt of the late, great Patrick Troughton, who played the role of the Doctor from the character’s unexpected, unannounced first on-screen regeneration in 1966 through 1969. Troughton’s impact on the series is considerable, and it’s nice to see that his figure is a great likeness. His trademark grumpy scowl – usually directed at the evils of the universe – is seen here, along with his baggy trousers and coat, lopsided bow-tie, and even his trusty recorder. Accompanying the second Doctor, as it should be, is his most frequent enemy, the Moonbase / Tomb-style Cyberman. Already released in the aforementioned Ages Of Steel wave, this Cyberman is still a great replica of the budget-addled-but-still-menacing baddies who seemed to delight in tracking down the second Doctor throughout his on-screen life.

“Really. I’m just fixing it for you, okay? It’s gotten all bent out of shape.”

I had my friend on the floor of SDCC buy the sixth Doctor variant with the sole intention of having it signed by Colin Baker himself, who I learned at a very late date would be at SDCC as well. But now that I have seen the figure in person… I’m in love. Something about the all-blues color scheme makes this sixth Doctor more dignified by default, compared to the riot of colors on the version of the figure depicting his TV persona. And I’m fond of the character development that has been afforded the sixth Doctor by the Big Finish audio dramas which spawned this never-televised “costume change.” Something tells me I’ll be tracking another sixth Doctor variant down so I can open it and add it to my shelf. (In the meantime, I’m not knocking having a personally-autographed item from Mr. Baker.)

Why These Figures Are Important To Doctor Who Fans And Collectors: I have been collecting Doctor Who action figures, from their various makers and manufacturers and licensees, for 20 years now, going all the way back to the now seemlingly lamentable Dapol range. I’m still fond of my Dapol collection – I still have it. I have not, as some folks have, auctioned off my Dapol figures to pay for more Character Options figures. At the time, the Dapol figures were good enough for the standards of action figures made in the ’80s, and with the company dipping into the past to release the third and fourth Doctors, there was a hint of a promise that we’d eventually get all seven (later eight) of the Doctor’s incarnations that existed at that time. But it never happened, and the likenesses actually took a downward turn in quality. Static, non-action figurines of the first and second Doctors were mocked up and prototyped…and then Dapol lost its license.

Why it’s important, and lovely, that Character has produced action figures based on a couple of long-dead actors is this: along with the recent announcement of upcoming figures based on Jon Pertwee (also deceased) as the third Doctor, it generates tremendous hope that we’ll actually have all of the television Doctors lined up on one shelf. The announcement – and the prototype photos – of the Pertwee figures bring us to a point where the only missing versions of the character are Sylvester McCoy as the seventh Doctor and the eighth Doctor, played all-too-briefly on TV by Paul McGann. (And, of course, the upcoming eleventh model, Matt Smith, debuting next year.) Anyone taking on the Doctor Who toy license is taking on an implicit, unspoken promise: all the Doctors should be produced. This time, it looks like we might actually get that promise fulfilled – and I think, until Character took on the task of producing figures from the classic series, that most of us had shrugged our shoulders and given up on seeing anything but the new series characters.

Now that we have photos of the third Doctor figures (which will, like these SDCC exclusives, be somewhat pricey two-packs incorporating variants on existing villain characters) and an October delivery date, it now seems that, faster than we dared to hope, the question is no longer if we’ll have action figures of all of the Doctor’s incarnations…but simply how soon we’ll have them. 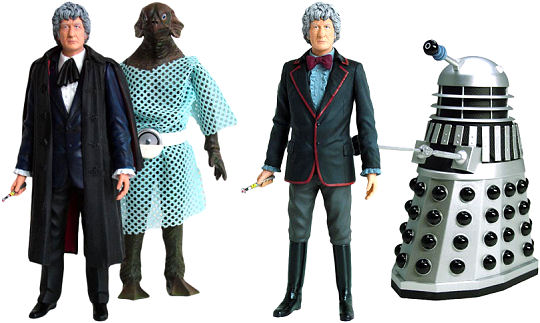 With huge thanks to Kristine Roper, without whom this article wouldn’t have been possible. Also, thanks to John Morrison, here are packaged photos of the B&W variants of the first two Doctors: 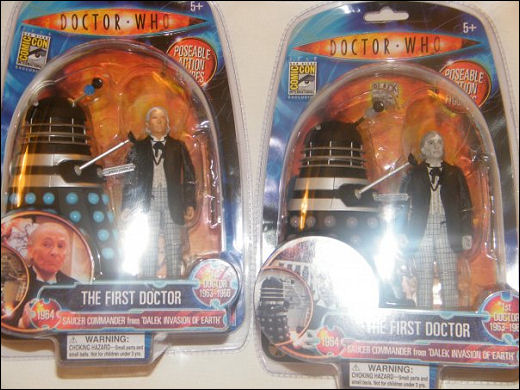 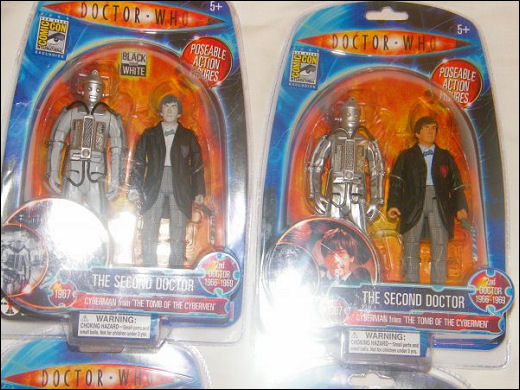