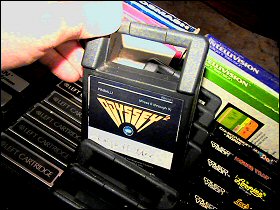 The Game: A virtual pinball machine is presented, complete with flippers, bumpers, and the ability to physically “bump” the table to influence the motion of the ball. Per standard pinball rules, the

object of the game is to keep the ball in play as long as possible. (Ralph Baer, 1978 – unreleased prototype)

Memories: Ralph Baer’s Pinball, released to the public on cartridge at the 2001 Classic Gaming Expo, was never intended to be a commercially released title. Instead, it’s a tech demo of sorts, a “rough sketch” example of what kind of games Magnavox’s still-in-development Odyssey2 system would be capable of. There are no special graphics to represent the various elements of the game; the bumpers are simply the letter O, and the flippers are forward and backward slashes.

In 1976, the paradigm shifted beneath Magnavox’s feet during development of the Odyssey 5000 dedicated console. Though it wouldn’t accept any additional games via cartridges or any other means, the Odyssey 5000 was intended to be the big dog among the dedicated systems, capable of 24 different games, including Pong-style games, tank-based wargames, racing games, and so on. Even as Magnavox prepared advertising material to tout the 5000’s strengths, Fairchild released the first cartridge-driven system – the Video Entertainment System (later renamed Channel F). Atari quickly ditched the Game Brain system it was developing and instead ramped up R&D on the Video Computer System, which ironically had more brains of its own.

Magnavox engineers investigated a major change to the Odyssey 5000 hardware, allowing it to accept additional games via cartridge, but some of the company’s accountants began to have serious doubts about Magnavox’s future in the home video game industry that it had created.

In August 1977, the original Odyssey creator (and inventor of home video games),
Ralph Baer, flew to Fort Wayne to meet with the top brass at Magnavox on the eve of a company meeting to decide the fate of the video game division at Magnavox. He argued in favor of the new system, nicknamed Odyssey2 (usually pronounced “Odyssey Two”, but in writing looked like “Odyssey (squared)”), had some potential after all – and the project was saved. (Thank you once again, Mr. Baer.)

In 1978, as the Odyssey2 was still in development, Baer submitted a pinball game he’d designed for play on the new programmable architecture; the game was actually coded by Baer’s colleague Don McGuiness.

As pinball games go, Pinball suffers from some of the same problems that often befall video pinball games, though the rudimentary “tilt” option – using the left/right axis of the joystick to “hit” the game and affect the ball’s path of travel – is quite an interesting addition. Ralph Baer didn’t create

any more games for the Odyssey2 – that task fell to Magnavox’s in-house games group and later to a freelance contract programmer named Ed Averett – but Pinball showed that the inventor of the home video game, and the latest system that he championed, still had the chops to come up with a decent game.