Stardate 42073.1: Counselor Troi, impregnated by an alien entity, gives birth to a child whose mind is not that of a child but of an alien wishing to discover the variety of human experience. Meanwhile, the ship’s newly promoted chief engineer, Geordi, and newcomer Doctor Katherine Pulaski are faced with the possibility of a fatal shipwide epidemic…

Notes: This story was originally conceived in the mid 1970s as an episode of the aborted late ’70s Star Trek Phase II series, which was to have been a new series with the original crew of the Enterprise. (That production later morphed into the first Star Trek movie.) The script was dusted off to serve as the delayed season premiere after a Writers’ Guild strike brought American TV production to a halt in the summer of 1988. It is also notable for being the first appearance of Guinan.

Where Silence Has Lease

Stardate 42193.6: Picard is confronted by an invincible alien intelligence who can alter the crew’s very perceptions of reality, and is horrified to learn that the entity plans on using half of the humans on board as lab animals to determine how many ways humans can die, so the captain, after exhausting all the options, sets for self-destruct.

written by Jack B. Sowards
directed by Winrich Kolbe
music by Ron Jones

Stardate 42286.3: Doctor Pulaski bets Geordi that Data would be overwhelmed if confronted with an intricate Holmesianmystery he has not yet read or experienced, and when the chief engineer and Data put this to the test, a too-perfect holodeck program almost ensures that not only will Data be beaten, but the Enterprise may be commandeered by Professor Moriarty.

Notes: Actor Daniel Davis won the part of a British butler on the series The Nanny largely on the strength of his performance in this episode and its sixth season sequel, Ship In A Bottle. Davis isn’t British at all, but actually hails from Little Rock, Arkansas. 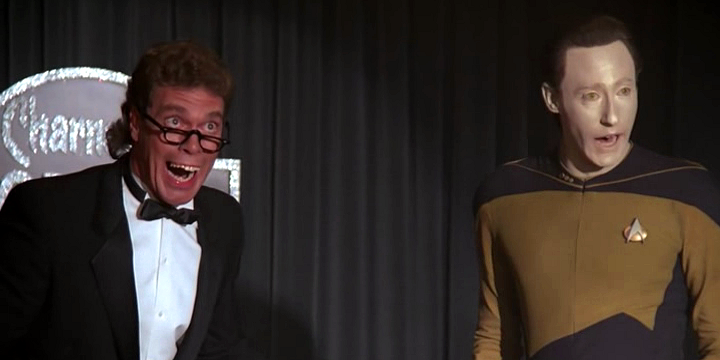 Stardate 42402.7: A nonchalant space rogue is welcomed aboard the Enterprise by Picard and the crew, but the pleasantries of his visit are cut short by two representatives of rival worlds demanding Okona’s life for crimes he claims not to have committed – yet he does know who the guilty parties are and it’s up to him to unite the aggressors.

Loud As A Whisper

Stardate 42477.2: The Enterprise is forbidden to interfere in negotiations to be conducted by their passenger, the deaf, mute mediator Riva, who seems more interested in Counselor Troi than in seriously bringing two warring factions together. It is only when his Greek-like Chorus, a vital element in his task since they translate his thoughts into speech, is destroyed by a trigger-happy alien that Riva truly worries about the task he must accomplish.

Stardate 42437.5: An Enterprise away team answers a distress signal from the habitat of one Dr. Ira Graves, who has been stricken with a terminal illness that could strike at any time. As he has been working for some time on a way to transfer his memories and personality into a computer, he naturally sees Data as the perfect alpha test model.

Stardate 42494.8: The Enterprise crew discover the disabled USS Lantree adrift in deep space – adrift because the crew has been inflicted with a disease which induces rapid aging and death! Doctor Pulaski personally involves herself in the search for a cure at a doomed genetic research base and becomes the most recent victim of the disease.

A Matter Of Honor 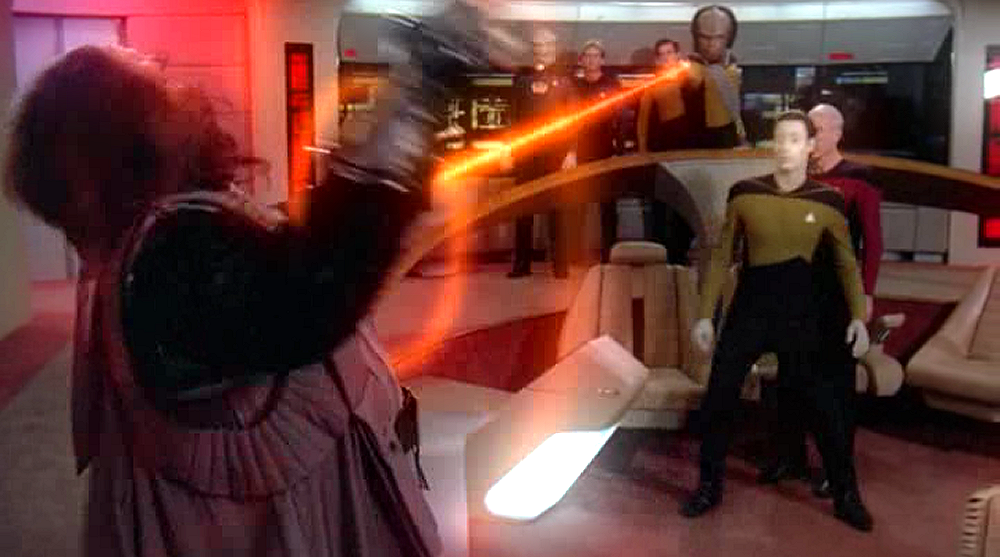 The Measure Of A Man

Stardate 42523.7: When Data refuses to participate in a Starfleet scientist’s android experiments where he will serve not only as a blueprint but as a guinea pig and spare part supply, he is put on trial and Picard wrangles with the premise that Data is not a free agent but the property of Starfleet – and Captain Louvois assigns Riker to prosecute.

Stardate 42568.8: Wesley is attracted to an alien princess whose is accompanied on the Enterprise by a severe governess as they journey to a world where they will become the new leaders of her civilization, and despite the warnings from the less-than-human governess, Wesley also finds out that the princess has some surprises in store for him as well.

Stardate 42609.1: After witnessing the tragic destruction of the Galaxy class starship Yamato in the Neutral Zone, Picard follows Yamato Captain Donald Varley’s haunch that the planet Iconia contains the valuable remnants of a now extinct but technologically advanced civilization, leaving Riker on the malfunctioning Enterprise to deal with a Romulan warship.

Stardate 42625.4: Riker, Worf and Data transport to the surface of what should be a poison-shrouded world after finding debris of a NASA space vessel, and discover a structure containing a reproduction of the literary Hotel and Casino Royale. Within the hotel lies the remains of the astronaut whose last possession was the cheap novel upon which the Royale was based. The Away Team’s only help is from the book itself as they read their lines – and between their lines.

Stardate 42679.2: Picard is left beside himself when the Enterprise encounters a future incarnation of himself in a battered Enterprise shuttlecraft, containing visual and captain’s logs describing the destruction of the ship and its crew, except for Picard, by an “energy vortex,” and according to the logs, the encounter is only six hours away.

Stardate 42686.4: Riker, offered a command of his own patrolling a hazardous area of deep space, is also offered advice and a long-overdue retraction of old hostilities from his father, but the impetuous first officer refuses all of this in an attempt to maintain an image of independence in the eyes of his crewmates and his father.

Stardate 42695.3: While on an extended research patrol through a star cluster whose planets’ geologic activity rips them apart from inside, Data on the Enterprise makes contact with a primitive being on one of these planets which is now in immediate danger and has to plead with the prime directive- conscious Picard to help his newfound friend.

Stardate 42761.3: Q returns once more to the Enterprise to plead his case to Picard for a position as a crewman on the ship after being expelled from the Q Continuum. When refused, the godlike alien propels the Enterprise thousands of light years to prove to Picard that some threats are too much for humanity, and the Borg is one of these threats…

Notes: This episode is the first to show the Borg, a race first mentioned (though not by name) in The Neutral Zone. According to writer/producer Maurice Hurley, the Borg were originally intended to be insects instead of cyborgs; budget shortfalls meant costuming cutbacks, even to the point that “stillsuit” costumes from Dune were heavily redressed as Borg costumes.

Stardate 42779.1: Riker and the crew attempt to rescue Geordi from a slow witted crew of Pakleds who claim to need the chief engineer’s technical expertise, while the captain, who is at a medical research base receiving a heart transplant, is about to die in the hands of a surgeon not possessed of Dr. Pulaski’s skill.

Up The Long Ladder

Stardate 42823.2: Signals arrive from two colonies in a distant star system, one of which is found by the Enterprise crew to be a motley collection of “primitives,” and the other, a group of clones whose gene pool is fading. The clones need fresh genes from the crew and are willing to use force to ensure their survive.

Stardate 42859.2: The Enterprise crew welcomes some fishlike Antedian delegates to a peace summit and, on short notice, Troi’s bothersome mother. Mrs. Troi, now in a phase of increased sexual activity, has come to the Enterprise to “visit” Picard, which meets with disapproval from Counselor Troi and amusement from Riker – while the captain hides in the holodeck generated world of Dixon Hill once more.

Notes: Tracy TormÃƒÂ¨ used a pseudonym for this episode and The Royale, having since stated this his original scripts for both episodes were rewritten against his wishes.

Stardate 42901.3: The Enterprise becomes the temporary home of a priority-one emissary from the Federation who has been sent to deal with a dire emergency – a crew of 23rd century Klingons in suspended animation is about to be awakened by their ship’s “alarm clock” to wage war against the former enemies of the Klingons – the Federation.

television story & teleplay by Richard Manning and Hans Beimler
based on an unpublished story by Thomas H. Calder
directed by Cliff Bole
music by Ron Jones

Stardate 42923.4: The Enterprise undertakes Federation-mandated wargames, as Zacdorn tactical observer Sima Kolrami observes and, more often, pesters the crew. Picard is pitted against Riker in a maneuver that is harmless until a Ferengi attack puts the crew of the Enterprise and the Hathaway, Riker’s vessel in a no-win situation – to which Riker has the key.

Stardate 42976.1: While exploring a new planet with Geordi, Riker is stung by an alien thorn whose poison creeps up his spine toward his brain. Pulaski brings him back to the ship and tries to trigger emotional responses to destroy the poison by forcing the first officer to remember his past adventures.