The Liberator is damaged heavily in the ensuing war and starts away from the main battles. The life support system begins to fail and the crew must abandon ship. Avon is knocked out when debris from a hit near the life capsule launch area collapses on him, and Cally and Vila get him into a capsule. Landing on the planet Serran, Avon is saved from vicious natives by a young woman called Dayna, who takes him to her father’s underwater home base. On the way there, they encounter Servalan, who has deposed the High Council, declared herself President, and has topped all this by getting herself marooned. Servalan attempts to seduce Avon, but he resists and uses Orac to signal the Liberator. In an attempt to steal Orac and slip away, Servalan is stopped by Dayna’s blind father, who is killed by Servalan. Dayna vows vengeance and she and Avon set out to find Servalan. After “rescuing” Servalan from the restless natives, Avon recovers Orac, and with Dayna he returns to the Liberator when it arrives, while Servalan hides away in the undersea installation. On returning to the ship, Avon and Dayna find a full squad of Federation shock troops in control…

Avon and Dayna are interrogated by the Federation officers, who are under the command of Del Tarrant. Avon, using the pseudonym Chevron, fakes an attempt to draw a concealed weapon and is knocked out by Tarrant. Dayna attacks with the same end result, and both are locked into a cabin. As soon as they manage to get out again, Avon contacts Zen and learns that the ship is en route to pick up Vila, who has been marooned on a jungle planet where a primitive faction and a race of advanced humans fight each other for any new arrivals on the planet. After that, Avon and Dayna discover that someone is killing off the Federation troops one by one. Avon sets out to learn who, while Dayna stays behind armed but is captured. Avon discovers that Tarrant is not a Federation Captain, but an outlaw who had been wanting to join Blake and his crew and had to disguise himself as a Federation officer. He and Tarrant overpower the other Federation troops and rescue Dayna, as Vila and Cally, who has also arrived on that planet, are about to be killed.

Dayna and Tarrant’s first assignment as Liberator crew members is to visit the planet Obsidian and investigate two things: rumors that Blake had fled to that planet after evacuating the Liberator, and the possibility of using Obsidian as a base from which to fight the Federation. But Servalan and her troops arrive to take over the world, and the people of Obsidian reveal the weapon which has kept them safe from the Federation all this time.

Orac, curious about an unusual black hole, takes control of the Liberator and swings her too close. The ship is swallowed up by the black hole, and it is discovered that this particular black hole is indeed unusual because it is artificial constructed by an outcast “god” from Cally’s home planet of Auron who seeks a powerful ship, brilliant slaves – and Cally.

Servalan’s new right-hand man and tactical advisor takes Tarrant on in a battle of strategy in space and on foot on the deadly planet of Kairos, but Avon’s obsessive search for an elusive new weapon hinders the Liberator crew’s efficiency – but saves them in the end.

Notes: In a 1986 interview with Time Screen magazine, Paul Darrow said that this episode was “the one that made Jan Chappell decide to leave.” 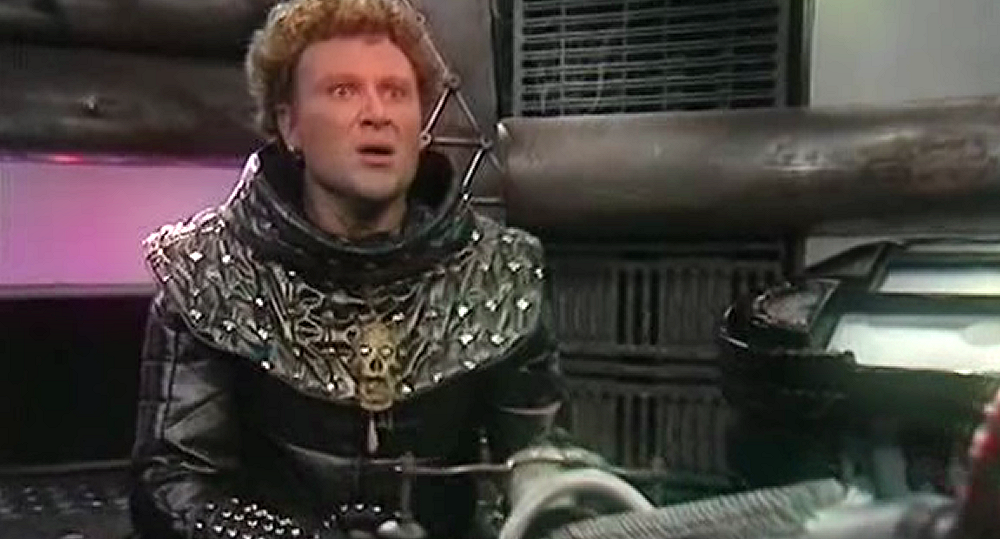 Cally’s twin sister, Zelda, sends out a telepathic distress signal when the planet Auron is ravaged by a plague which has, in fact, been unleashed on the pacifist Aurons by Servalan in an attempt to capture the Liberator and its crew.

Avon sets out to avenge the death of his lover, Anna Grant. He kidnaps a Federation “prison psychologist” (torturer) whom he believes is responsible for her execution, but information gained from that encounter leads Avon and the crew back to Earth in a raid on Servalan’s mansion – which has been taken by a rebel group already – where Avon discovers that Anna was never killed…nor was she ever, in fact, alive.

After visiting a derelict alien “tomb-vessel,” Cally is inhabited by the soul of a long-dead creature who begins to take her shape, draining her of her energy, and takes over the ship and, one by one, the crew – except for Avon, the one member of the crew who is determined not to surrender into slavery. But the alien possessing Cally has predicted Avon’s presence and his resistance.

The Liberator is captured by an artificial planet whose inhabitants wish to use the ship as the centerpiece of a sort of galactic museum. The crew is studied too, though they discover that after Ultraworld’s organic central brain digests all the information about them that it can, it intends to digest them physically as well to keep itself alive.

Notes: Trevor Hoyle also authored several novelizations of the series, which combined and condensed the plots of several episodes in each book, aimed primarily at a younger audience.

The Liberator crew follows Servalan’s star cruiser to a cloaked planet on the edge of known space, where they discover a band of rogue Federation troops who are inviting criminals to join their new world. The planet’s every need is provided by a computer called Moloch – or at least everyone assumes it’s a computer until its reveals its true nature to Avon.

Tarrant’s brother, Deeta Tarrant, first champion of the planet Teal, is killed in a gunfight which decides the fate of two warring worlds who use gladiators instead of conventional weapons to fight their battles. Tarrant challenges the victor, which Avon and Orac discover to be an android placed in combat by Servalan, who hopes the two governments will suspect each other of cheating, resulting in a real war which would allow the Federation to take over both planets.

Avon takes the Liberator on a wild goose chase to pursue a signal he has received from who he believes is probably Blake. He reaches the artificial planet Terminal and teleports down alone, telling the others he will kill anyone who follows, but Tarrant and Cally follow him anyway. He finds an underground complex where he is knocked out, drugged, and is taken to a lab where an image is implanted in his mind that he sees and speaks to an injured Blake who relies on his life support systems. Avon is then taken to Servalan, who soon captures Tarrant and Cally as well. Meanwhile, on the Liberator, due to a careless charge through a cloud of corrosive fluid en route to Terminal, the ship is falling apart: Zen “dies,” leaving just enough power to operate the teleport system. Servalan takes hostages, contacts the ship, and has Dayna teleported down. Servalan and her troops are taken aboard by Vila, who then is teleported down himself, saving Orac at the last moment as well. As Avon, Tarrant, Cally, Vila and Dayna watch from the control center inside Terminal, the Liberator leaves orbit with Servalan in control – and explodes in a massive fireball.