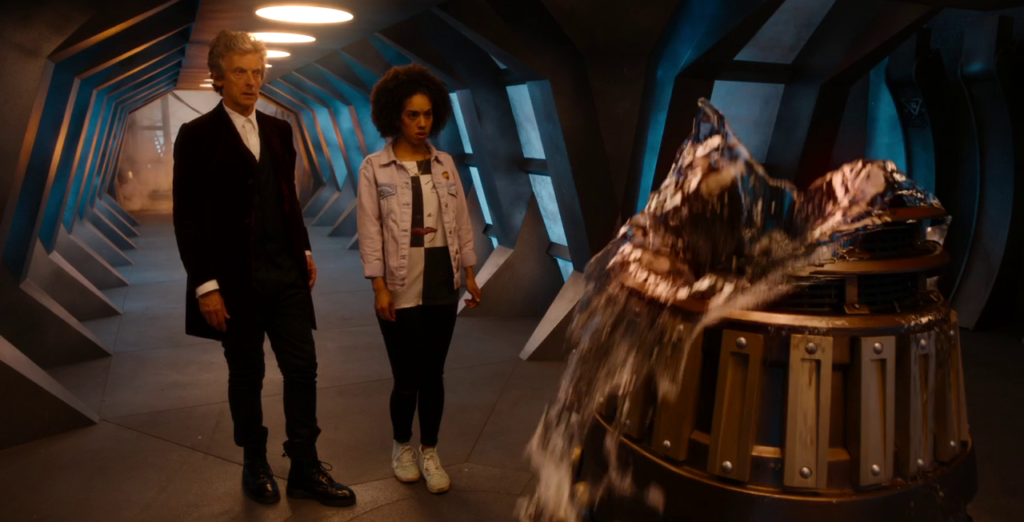 Review: One last time, Steven Moffat kicks off a new season of Doctor Who with a clear indication that there’s a story already in progress of which the audience is largely unaware. The Doctor is now a lecturing professor at a university, and has been for something like 50 years, but there’s clearly a

larger game playing out here, something involving Nardole and a vault somewhere on the school’s campus grounds. Of course, we’ll find out later what all of this means. It’s not the main thrust of this story.

The Pilot gives us a new companion in the form of Bill Potts, and it’s Bill around whom everything revolves – literally. Even the Doctor doesn’t seem to be up to much until Bill arrives on the scene and off-handedly mentions a puddle. She’s the engine of the story, she’s why everything is happening, and everyone else is just along for the ride…and the pacing of that ride rules out any kind of explanation as to what this creature is that happens to be powerful enough to follow a TARDIS through time.

Pearl Mackie makes a huge impression with her first outing, enough that I found myself wishing that Capaldi had gotten more time with Bill than with Clara. Her unflinching enthusiasm for the incredible situation she’s gotten herself into is infectious, and she sparks well off of Capaldi; future episodes will tell how well she mixes things up with Matt Lucas, but one can’t help but suspect that’ll be a fun combination as well.

The appearance of the Movellans is a lovely little throwaway reference that isn’t even remarked upon – no one even so much as says “Ah, Movellans!”, they’re just there for longtime fans to spot and cheer on, and for the uninitiated (or just those who have forgotten), they’re cannon fodder anyway. This has become my favorite flavor of Doctor Who continuity callback in the Moffat era – the incidental kind that leaves little room to mess things up.

The Pilot – its title a sly nod to the fact that every new companion introduction is a soft reboot of sorts, a new pilot – is a promising start for Moffat’s last season in the producer’s chair.