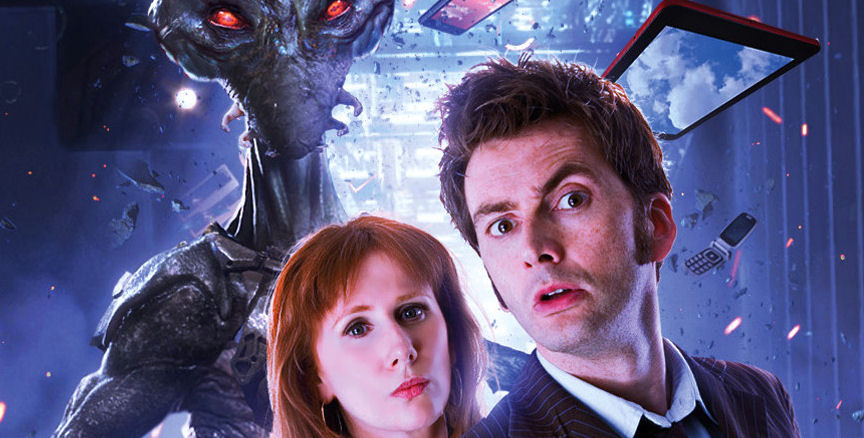 Review: If there’s a better story to reboot the tenth Doctor as an audio-only phenomenon, I’m not sure what it would be – even though this story is awfully familiar. At about the same time as Big Finish’s first Tenth Doctor box set arrived, your author had been watching the British Film Institute’s complete series DVD set of the now-semi-obscure 1975 BBC series The Changes, in which – lo and behold – someone trying to gain control of the whole of England sets about inducing mass technophobia. Now, no one in this story sets about upending cars and beating them with sticks, which is probably for the best as it would be difficult to “show” that in audio form without having to explain what’s being heard, but I couldn’t help immediately having flashbacks to The Changes. This, however, is probably a symptom of being a Doctor Who/British sci-fi/fantasy fan of A Certain Age, and won’t be noticed by many of Big Finish’s younger listeners.

What will be noticed by them is, at the risk of spoiling things a bit, this: Donna Noble saves the world. With the Cognoscenti weapon working even better on the Doctor’s even more advanced brain than it does with the average stupid ape, much of the story is spent barrelling toward an inevitable conclusion with the audience wondering how Donna’s going to work it out on her own. I was never in any doubt that Big Finish could talk David Tennant back into a studio, but Catherine Tate is the real treat here, recreating Donna almost effortlessly. Big Finish could’ve done what Titan’s Doctor Who comics had been doing – introducing new companions who exist only in this particular medium – and the audience still would’ve shown up, but getting the tenth Doctor and Donna on board is a real treat. Top and tail it with Murray Gold’s theme music arrangement, and it’s 2008 again.

With both the tenth Doctor and the War Doctor added to the Big Finish stable, Big Finish’s bold strides into the new series era are enough to have listeners asking “What Doctor Who gap year?”