The true (but necessarily vague) tale of the time I had to sue someone for stealing from theLogBook.com. 😯 Also included: more weird radio stories, waterproof droids and… a cat on crack.

War stories from the end of locally-owned radio. The goofiest radio commercials you’ve ever heard. Highly unprofessional and inadvisable behavior. Plus special appearances by little E and the Devil. 😯

No Comments Funny Stuff, Toiling In The Pixel Mines Podcast

As noted in the site’s news section today, a new CD of music from the third season of Doctor Who is due in about a month. Now, as much as I’m looking forward to that, I had to fess up that the music was yet another aspect of season 3 that just underwhelmed me a bit. It seemed to me like about 3 pieces of action music were written, and a few variations on Martha’s theme, and some other bits…and then all of the above were recycled relentlessly throughout the season. I’ll still be happy to pick up the CD, because at least all of this stuff was decent music, but on the tenth reiteration, it loses a little something. At this point, it’s almost like the more recognizable music from the original Star Trek – it’s kinda like “cue the Corbomite Maneuver cube music, there’s something sinister out there!” I love that they’ve got a whole orchestra on this show, but I am starting to wonder if perhaps Murray Gold shouldn’t rotate with someone else to do the writing. Even Dudley Simpson took a break once in a blue moon.

Speaking of TV composers who did a Ton Of Stuff, just got these the other day from the fine folks at Dennismccarthy.com: 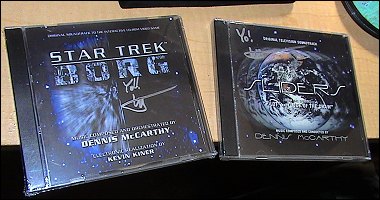 Nifty stuff on each one. I’m still hoping that maybe we’ll actually see some real live Trek TV music sneak out the door this way, but I’m not holding my breath. Speaking of Trek music, I’ve finally reposted the Dennis McCarthy interview in the news archives here, and as a treat – well, I don’t know if you’ll think it’s much of a treat – I’ve included the original telephone recording of the interview from 1993. Some things to keep in mind about that interview include: (A) the fact that I was 20, and (B) I was at the height of my Trek geekdom. If I had the chance to redo that interview – and don’t think that I haven’t approached him about doing a new one – I’d be a little more even-handed about it. There are some somewhat insinuating questions in there on my part – oh, so the producers tell you when to wipe your butt, do they? – that come across as someone who’d read a few Film Score Monthly editorials too many. And, call it perverse, I know so much more about the other, non-soundtrack music he’s done that I would broaden the line of questioning, though I still chuckle at catching him off guard with that Tommy Flander thing and still getting a pretty in-depth response about it. (I think that’s actually my favorite part of the whole thing, actually!) And of course, these days, there’d be questions to ask like his feelings on only getting to do one of the Trek movies (which I think was, musically, one of the best ones of the whole series, though I’m not sure anyone else will ever give it that due), the Enterprise budget cuts that forced him to “go synth” for much of the final season, and stuff like Sliders and Stargate SG-1, among others. When I first got a CD burner – the stereo component kind, mind you, not the computer drive – that interview, which I’d kept on cassette for about 6 years at the time, was one of the very first things I burned to CD-R, and that CD-R turned up during housecleaning not so long ago. So there it is, an interesting little time capsule from my past. (At the time, the interview originally appeared in a text file called “the LogBook Master Index of Soundtracks” which was bundled up with a distribution ZIP file and sent across the pre-internet BBS file-forwarding networks.)

I really wish I had the chance to do more interviews for the site. Maybe someday – for right now, the only podcasts you’re likely to get out of me anytime real soon will probably be diaper changes, which technically should really be poocasts. 😆

I’ve been sidelined by a bit of mild food poisoning for a couple of days, so when I wasn’t stuck in the bathroom for hours, I’ve tried my hand at podcasting for the first time. (Don’t worry, none of this was done in the bathroom itself – that would be a poocast. Not that I might not do one of those in the future…) My first podcasting experiments will be revealed on Friday the 17th, as I launch a series – or maybe I should say a tentative series – of Doctor Who podcasts to accompany Sci-Fi Channel’s broadcasts of the new series in the U.S.; the idea here is to help draw continuity connections between the old series and the new for casual fans or new fans. (If you’re a longtime dedicated fan, well, probably nothing new for you here.)

I wound up talking almost non-stop through Rose, though there were a couple of significant pauses for The End Of The World. I quickly discovered the value of keeping an ample supply of beverages on hand for this activity, and lived in fear of the weather alert radio behind me going off during yet another stormy day. (Not long after I finished End Of The World, I was getting things set up to record The Unquiet Dead when the first alarm sounded, followed about ten minutes later by the second one, and I figured “well, that’s about it for today.”)

I also discovered that I’m really not too well equipped for this whole endeavour of casting from my particular pod. I still don’t have a microphone (which certainly would’ve helped when I was trying to record the Voice of Odyssey a few weeks ago), so it’s currently a convoluted process of recording my voice with my camcorder (with the lens cover closed) for 45-odd minutes, and then spending another 45-odd minutes dumping that audio to CD, and then more time to finalize that disc, rip it to my hard drive, and edit the top and tails (I’m assuming you don’t want to hear me do a TV-style 3-2-1 count-in here.) A microphone would let me just do my damage straight to the CD-RW and cut something like an hour out of the process.

Ah well. It’s really strange how multimedia this whole thing is becoming. Oh, to quit my day job and do this all day. Assuming anyone likes these, I’ll be looking for other podcasting opportunities in the future…I just have no idea what they’d be. If anyone’s got any ideas, I’m all ears.