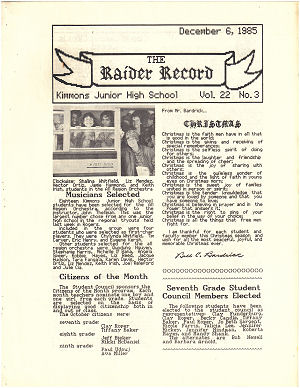 It’s time once again to dip into the ’80s and revisit another issue of the Raider Record, the junior high school paper of which I was copy editor between 1985 and 1987. As always, you can find every issue from that period scanned in PDF form here, or you can view or download this specific issue here. Going through and scanning these, lots of memories came bubbling up to the surface, unbidden, that I thought would be entertaining to record for posterity here.

Previous installments of this blog series mentioned that we were on the bleeding edge of (budget) desktop publishing technology, and my own experience with the Apple II was coming in perhaps too “handy” in the process of putting the paper together. By now, we’re on issue #3, we’ve hit something resembling a stride, and let’s see what all I can pick up at a glance from my dusty, cobwebbed synapses.

That’s really it for this issue. I’m sure we were all ready for Christmas break to hit (and we probably are now too), and worrying whether or not we’d get that Swatch we all undoubtedly asked Santa for (see page 6).