And so it begins.

Okay, rewind a bit. In the course of going through some folders and boxes I have been carrying around with me for decades, but haven’t gone through, I found treasure – namely, the entire two-year run of my junior high school newspaper during my tenure in eighth and ninth grade journalism class. All seriously yellowed 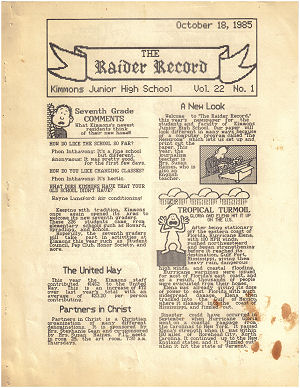 and fragile, but all complete. The good and the bad, the inadequacies and the excesses of youth, are all really, really on display here. And unless I somehow turn up an old folder with hand-written missives and stories from grade school, this is the earliest record of me, or my lifelong friend and partner-in-crime Rob Heyman, as a writer.

To tell that story, one has to rewind a bit further. I understand that not everyone will really care about all the background, so let’s keep the meat & potatoes up front: right-click this link to download a PDF of this issue of the Raider Record, published exactly 31 years and a few days ago. The file is approximately 13 megs.

And now the backstory.

In grade school, I discovered two things: my mother’s electric typewriter, and a magical thing called a photocopier, which she had access to at work. (Turns out my dad had one at work too.) I could type something up once and make many copies. I could even doodle stuff on it, and that would be copied too. And before you knew it, I had my own little newspaper going, copied by my long-suffering mother and patiently permitted to be handed out to my classmates by my teacher. I wrote everything in it, Mom would check my spelling, and it was “off to the presses”.

I later discovered things like press-type, and on my mighty new 64K Franklin ACE 1000 computer (an Apple II clone), word processing, which would let me save things I’d written and return to them later. There was even a brand new program for the Apple called The Print Shop, which could be used to print cards, signs, banners, pictures… and there were now things called modems which would allow your computer to send and receive stuff over the phone lines…

I’m sure you can see where this is going. (It’s also worth nothing that this was rapidly becoming something done entirely in solitary: the pattern of my life was set by the time I entered my teens.)

When signing up for classes in seventh grade, I discovered that there was a journalism class…which I couldn’t get into until I was in eighth grade. I spent seventh grade looking at the school paper, which was typeset and pasted up the old-fashioned way, thinking “I could make it look better than this.” (Humility wasn’t one of my superpowers at the time.)

As it turns out, this was fate smiling down upon me. I went into journalism class in my eighth grade year, discovering that the class had a new (as in brand new, as in “rookie”) teacher named Susan Haines, and that she was going to do things differently. There was a new computer program called The Newsroom which would effectively allow you to set up and lay out an entire publication electronically, print it on a dot matrix printer, and duplicate from that. And – o lucky day – it ran on the school’s Apple II computer.

The pleading and cajoling of my parents to get me a copy of The Newsroom began, probably on the ride home from school that first day of eighth grade. I had to do a lot of explaining as to why The Print Shop couldn’t do what The Newsroom did, why the money needed to be spent. Truth be

told, I didn’t really need my own copy of The Newsroom on my own computer – there was enough time provided to do this at school – but I wanted to learn the program inside out, to be better at it, and to be able to do my own stuff on it. I would, over time, learn that I could import stuff from The Print Shop into The Newsroom, vastly expanding the repertoire of possibilities for both programs (and for the paper). The Newsroom was sold with several clip art disks, all of them in a very similar signature style, that we used often; by using The Print Shop and other things I had at home, including a video digitizer that I acquired during my ninth grade year, we could technically import photos without having to physically paste them to the master printout of the completed layout. It was always an ongoing experiment, and as it turned out, we needed more time than we could get on the school’s sole Apple II. Rob and I, with Mrs. Haines, started clocking some serious weekend time in the Apple computer lab at what was then Westark Community College (now the University of Arkansas Fort Smith).

Rob was a Commodore 64 guy. There was also a Commodore 64 version of The Newsroom. Files could be exchanged via modem between the two versions, even if you were on different platforms. This we did: Rob and I wound up spending what seemed like every waking moment putting the school paper together between us. From this sprang a friendship that encompassed stuff like doing a dramatic scene in speech class, making extremely amateurish home movies that gained complexity over time, if not necessarily actual expertise, even working in radio together for a while.

Layout and graphic design were the big things to learn with The Newsroom, and as I sit at work every day laying out catalogs in InDesign and assembling retail product packaging in Photoshop and Illustrator, it’s pretty easy to see the through-line.

So, for your delight, amusement, and probably horror, I present in PDF form the first issue of the Raider Record. I’ll be scanning and posting future issues as well, along with more of the story that was going on behind the scenes. Take a look back and chuckle knowingly at this relic of a different age, in nearly every way.

Wherever Susan Haines might be now, I hope she might happen upon this and see what a seismic impact all of this had on my life. Just because, by chance, she had decided to start using a program that happened to run on the Apple II that the school had, and I walked in and excitedly raised my hand and said I also had an Apple II and could work with this program. (Come to think of it, that’s how my last job interview went. Yes! I know InDesign and WordPress! I’ve written and laid out my own entire books! I can do this! And I’m still there over a year later.)