Saturday night was the Tulsa Doctor Who Mini-Con, and during the same weekend Konsplosion was happening in Fort Smith (I only did a solitary panel on Sunday afternoon). Once again, in one weekend, I did two shows in two states and wrapped up my 2014 con season with an exhausting, caffiene-fueled bang.

The Tulsa show was much more fun than I’d anticipated, but then that’s any first-year show, isn’t it? You have no idea what to expect because there’s no precedent. In no particular order, the Tulsa con had off-the-scale cosplay, great music, screenings (Day Of The Doctor is a lot of fun with a crowd), really good panelists, me doing a panel (which, trust me, was very different from the really good panelists 😆 ), and just a great crowd. I’ve never done a one-show-specific con before, and this one was awesome. When the doors first opened, it looks like a slightly thin crowd making its way in, and then the floodgates opened and an ocean of fezzes and long multicolored scarves poured in. Among the cosplayers were quite a few Tom Bakers, quite a few Tennants and Smiths, at least one each of Hartnell, Troughton and Pertwee, a steampunk humanoid Dalek (I wish I’d gotten a picture of him – very inventive!), a weeping angel or two, at least one Cyberman, a couple of Rivers and Amys, a startlingly good Captain Jack (it didn’t hurt that the guy had about 70% of Barrowman’s looks – there’s someone who didn’t have to go home from the show lonely if he didn’t want to 😆 ), and a Gwen (also from Torchwood) that I had to try hard not to stare at, if only because she looked amazingly like Eve Myles herself. I talk a lot about cosplaying as Strax someday (I’m already short, round and bald, I figure that’s about 50% of the work done right there), but… I am not in the same league with these crazily creative people. I love seeing this stuff.

My panel was a stream of consciousness ramble that was repeatedly diverted by avalanches, including a first (someone paying me for merch from my table while I was on stage – I’m not sure I ever quite recovered from that and kept cracking myself up from there on out). I did more or less the same panel at Glitchcon earlier in the year, and that version of it was much more coherent. I was exhausted and a bit dehyrdrated by the time I spoke at Tulsa – sorry. 😳 I was slated for a second panel, but I showed up to find an empty room. At first I thought it was going to be the “panel for two” (a la my Glitchcon UK sci-fi panel, where one couple showed up and I just sat with them and did my spiel one-on-one-plus-one-more, which was actually one of my favorite con experiences this year), but then I found out that my tiny audience consisted of the folks looking out for the venue’s A/V gear and not attendees at all. 😆 I strongly recommend walking into an empty panel room at least once – it keeps you humble, and is a valuable (if occasionally crushing) barometer of how far you can push in a “niche” direction at what’s already a “niche” event. I’m not sure what’s worse – getting up in front of an empty room, or getting up on stage, realizing how mentally wiped you are, and launching into a disjointed spiel that’s somewhere between the panel you originally planned and outlined and practiced, and badly unrehearsed stand-up comedy. 😆 This was one of those nights where I got to do both, and realized that maybe I should stick to less embarrassing podcasting. 😛

Business was brisk at Tulsa, too, despite my unconventional display. Vendors were informed early on that they’d need to bring their own tables, because the venue’s tables were… well… off the table. I always haul my stuff around in a variety of plastic crates, and in this instance… they became the table that I wasn’t going to have available to me this year.

As cheesy as it may be to haul one’s merch around in a variety of crates originally used to ship cans of green beans and spinach, these things are endlessly configurable, sort of like Minecraft meets Storage Wars. You have a table? Great, the crates are now shelves and you can sell moar stuff! Don’t have a table? Stack the crates up. Now you have a table. 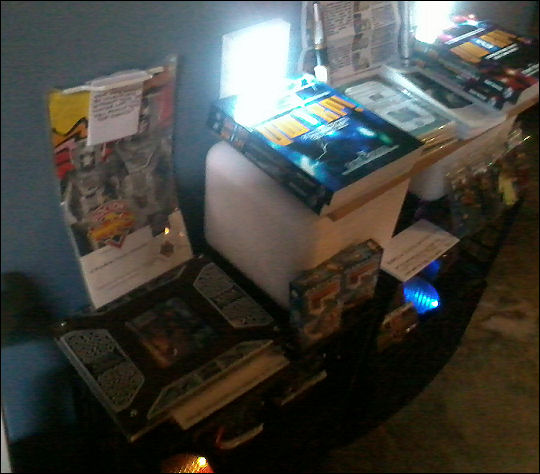 Early on, the vendors had been notified that lighting would be sparse once daylight started leaving us, so I broke out my lighting apparatus early. The darker it got, the more of it I deployed, until everything I had was in play. Which brings me to another personal rule: have battery-operated lights handy, because access to power might be a big question mark because of where you are. I had to change out batteries on one of my lights halfway through the show, but I was prepared for that contingency. People aren’t gonna buy books that they can’t see. Both passers-by and fellow vendors were complimentary of the lighting setup; those vendors who didn’t heed the advance warning about low lighting seemed to be the ones who started packing out first.

I didn’t pack out until shortly before the dance part of the show started. My initial instinct had been to stay until 10… but the reality of it was: I was awfully tired. I hadn’t eaten anything all day (so I wouldn’t have to go to the bathroom during the show) or had anything to drink (same reason), and I was dehydrated and exhausted. And yeah, that’s pretty stupid and I did it to myself. I’ve found myself, more often than not, holding down vendor tables alone. I’ve got to find some willing accomplices to help me out. I’ll be the one holding the table down at least 80% of the time, in case people want books signed, etc., but it’d be nice to get up from the table and experience the rest of the show, even briefly.

Konsplosion was held the same week as the Tulsa Mini-Con, but since the Tulsa event was aimed right at my target audience, I couldn’t not go. As was the case with last year’s same-weekend collision between OVGE and Konsplosion, I could only spend time at Konsplosion on Sunday, and I had errands to run in Fort Smith after that, so I couldn’t even stay at Konsplosion much longer than the running time of my panel (which I deliberately shortened to make sure everyone had time to go to the 1pm performance of D20: The Musical, a locally written and produced show that several of my friends have been pouring pure sweat and adrenaline and talent into for something like a year now). My Konsplosion Doctor Who panel was much more coherent than the same topic on Saturday night at Tulsa, and I had a good crowd that was more than happy to go off the rails with me (and, unlike the Tulsa gang, they didn’t even have to sit through my John Hurt impression). 😆

And that’s it for con season this year, at least for me; baby #2 will be arriving in a matter of weeks, so I’ll be out of circulation for a while. I’d love to be able to commit to all of next year’s shows right now… but a lot is up in the air right now: the health of the baby, the health of my wife after having the baby, what my employment situation is at that time (what with my current job being a contract gig that will likely end at the end of 2014), and frankly what my own exhaustion/energy level looks like at that point. You may have seen the last of me for a while unless something extremely local (read that as Fort Smith or Fayetteville) materializes. 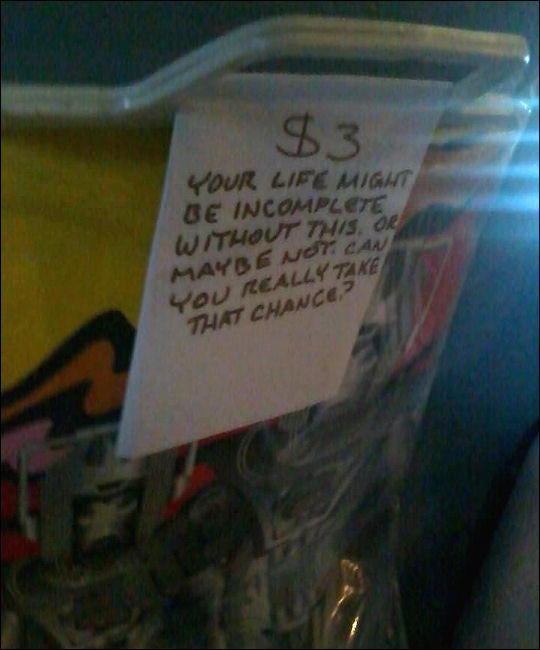