This year, in the Facebook groups for two local conventions that I support and attend, there were little blow-ups at the last minute that got under my skin a bit. In one case, an attendee was protesting the long-standing rule that he couldn’t sell his own games person-to-person on the show floor. (That’s a no brainer. If anyone can do that, why pay for vendor tables?) In another case, a poster was berating Sunday foot traffic at the convention in the past and made the observation: “Glad I wasn’t a vendor. I would have been pissed. Because if you didn’t make your money on Saturday, you damn sure wasn’t going to make it on Sunday.”

Whoa there! 😆 Just stop before you embarrass yourself any further. Seriously. Because if you are a vendor, you’re the author of your own destiny at these shindigs. What follows is a slightly disjointed series of notes that I’ve jotted down over three years or so.

This is work. You’re going to a show as a vendor? Awesome. Let me share a little secret with you: unless you’ve got a reasonably large crew (at least three people), you can’t realistically expect to also be an attendee at the same show. If you’re a guest speaker as well, you’re either leaving your vendor table in the capable hands of your backup, or you’re shutting down the table to do your panel. There is no in between: it’s a simple one-or-zero, binary thing. Check ahead to make sure those in charge of the vendors’ area will let you close down and leave your wares there under your watchful eye, otherwise you’re breaking down the whole thing to go talk to a room full of folks, and you’ll have to spend time setting up again when you get back to the vendors’ area. Having even one other person with you makes things so much easier, but sometimes you can’t always swing a second person. You may have to make a decision on whether you’re a vendor or a speaker. (I had to make that choice this year, since paychecks have been sporadic at best since the beginning of the year and there’s a baby on the way. What I arrived at was: vendor for one-day events, speaker for multi-day events.) If you’re flying solo… you won’t be able to get away from the table a whole lot. In a way, you’re paying to miss the show for the chance to sell stuff to everyone else. You’re there to make a buck. Go ahead and plan on dressing like you’re there to make a buck. I learned early on, the hard way, not to go in anything less than jeans (and more often, I’ll try to go in slacks). I shave, or at least tame what facial growth I have into some kind of shape that’s not too out-there. Because whether you’re a guest speaker or not… you’re on.

Let there be light. Sometimes you wind up with a perfect lighting situation for your wares, and sometimes you don’t. You can, however, take ownership of this situation to some degree. If you’ve got access to power outlets, you’re ahead of the game automatically. If you don’t, you’re not completely helpless. In 2013 I spent a grand total of about twenty bucks on a few “novelty” lighting gadgets from Amazon. 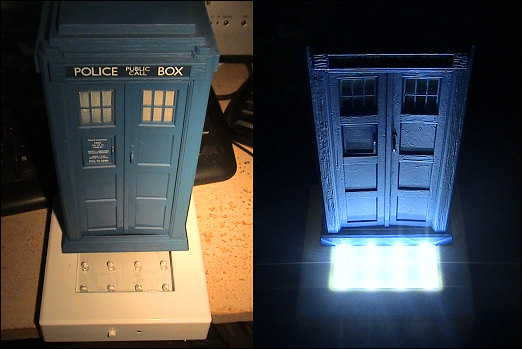 These LED light boxes can be had on Amazon for about $5-6 each. They run for a surprisingly long time on four AAA batteries each, though there’s also a jack for an AC adapter. They’re a bit overpowering to “underlight” something with – they’re bright enough that they’ll bother anyone standing over them. But if you’re selling books or something else that all but demands visual inspection, you could do this instead and escape the curse of the dimly-lit area. 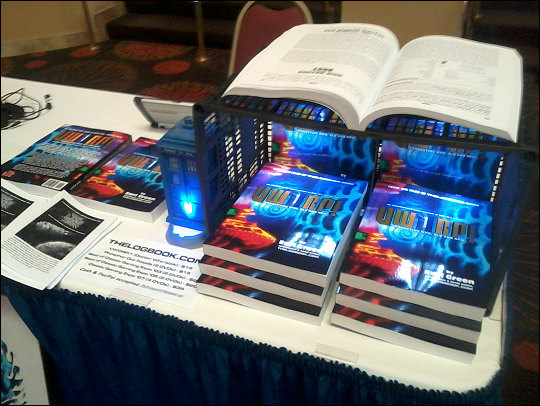 The book on top of the crate is hiding two of the white LED light boxes, which are pointing down into the crate, illuminating the books or whatever you have down there. 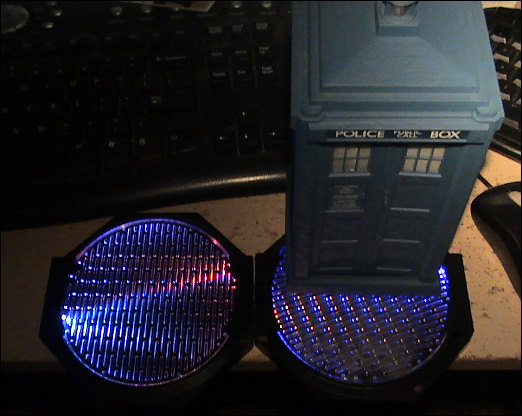 We have octagons – we’re from the future. These are specialty items apparently intended for the very specialized purpose of underlighting models of the mecha from the Gundam anime series. There are colorful lights which alternate in different patterns; the round “lens” can be rotated to redirect the angle of the lights to a certain extent. Not overpowering, but intruguing to the eye from across the vendors’ room.

Especially if everyone else is languishing in darkness.

Don’t walk away. This one is so important that Jeff Lynne wrote a song about it, guys.

Okay, that really has nothing to do with conventions and vendors, but it’s a nice song.

Don’t get fed up/pissed off/disheartened enough to pull the plug and leave a show early. If you have a six-hour drive home on a Sunday… that’s one thing. But “if you didn’t make your money on Saturday, you damn sure wasn’t going to make it on Sunday” doesn’t cut it. There’s no set rule to when the bulk of your sales will happen, but I will say this: right before the show ends, those who still have money to burn may finally give in and get that thing on your table that they’ve been eyeing all weekend. That means it’s a good idea that your table, and that thing on it that they’ve been eyeing all weekend, is still there up until they drop the curtain on the convention.

This is really common-sense stuff, but you know… I keep on seeing people not doing it or complaining about doing it.

I’ll see you guys next at the Tulsa Doctor Who Mini-Con on September 13th at Tulsa’s IDL Ballroom. The organizers have already been good enough to let vendors know that the vendors’ area won’t exactly be brightly lit. That’s okay. I’m ready. 😉

No other posts on this day.