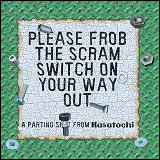 Sadly, all good things must come to an end, and in case it hadn’t become obvious in recent weeks, the “one Kasatochi release per week” schedule I was able to keep up through the summer is one of those things. Kasatochi was always a bit of “stealth pre-production” I was carrying out for another project, something you’ll get to see/hear in the fullness of time. This last release of the summer – upon which I bestowed the absolute silliest title I could come up with – is actually a combination of bits and pieces of three other Kasatochi releases that just weren’t coming together as full-length projects in their own right. The first project was intended to be an album of covers of recent songs (as in “within the past 10-or-so years”), the second was a “utility” album of stuff I needed for the aforementioned project, and the third was a “best of” (which may or may not still happen), much of which would’ve been remixed to sound better. To put an exclamation point, or perhaps an interrobang, at the end of the Kasatochi sentence for now, I combined all of the finished tracks for these three projects, and wound up with the last hurrah. For now.

Go to the dedicated Kasatochi page and download it for free. Rest assured, there’ll be more… but it’ll show up later. Maybe – just maybe – something under your tree…