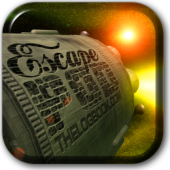 Some time back, I wrote and recorded and only partially edited a longer intro for the daily Escape Pod podcast that gave a better explanation as to what the heck the thing is about; my thinking when I wrote it was that, what with the usual progression from space missions and science milestones to celebrity birthdays and obits with a geeky bias to moments in TV, movie and video game history… it might seem unfocused to somebody. (It doesn’t seem that way to me, but I still have to pitch it to an audience that isn’t me. Damned inconvenient sometimes.)

I had the crazy, sleep-deprived thought recently that maybe I should finish that out. I started from scratch on the sound effects mix, and came up with nearly 40 seconds of mechanical futuristic beauty, only to realize why I’d given up on it the first time:

But just for giggles, I’ve posted the intro on its own – if nothing else, it’s on the RSS feed if anyone needs an “explainer” of what the Escape Pod covers and why it’s there. You can hear it here:
[audio:https://www.thelogbook.com/podcast/escape/pod/escapepod0000.mp3]

The background sound mix is a multitrack monster 22 tracks deep, with about eight of those tracks being layers of the ascending power-up/engine-start sound, which I thought should be deep and whooshy if you’re hearing them from inside the pod. There’s a lot going on here, including lots of little audio Easter eggs as homages to some old favorites. See if you can spot them all in the complete Escape Pod intro sound mix:
[audio:https://www.thelogbook.com/podcast/escape/pod/escapepod-fx.mp3]
The mental picture I had during all of this is that you’d want a real escape pod on a real spaceship to have the cold-start-to-ready-to-go time of a horny dog. Therefore, you go from opening the hatch to hitting space in under a minute.

The Pod is still looking for a sponsor or two to justify the not-inconsiderable time that I sink into it every month, if anyone’s interested.