International Space Station astronaut Chris Hadfield has posted a really interesting sound file or two on Soundcloud. In response to a Twitter question about what it sounds like aboard the ISS, Hadfield posted a recording of the ambient sound of constantly-running life support/air conditioning and a few dozen computer fans. You can hear it here.

Kinda sounds like home to me. I’d be the last person to trivialize spaceflight or anything related to it, but that wall of computer-fan-and-A/C sounds an awful lot like… 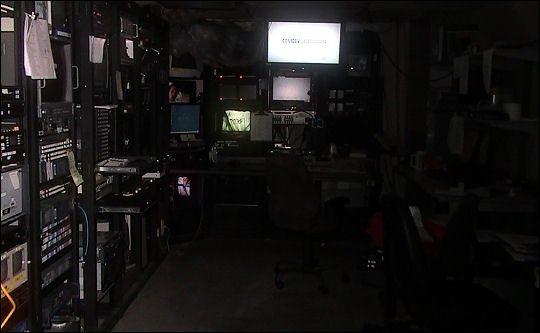 …master control at the TV station. (OK, bad image choice – this was after they’d torn the guts out of it, and before they showed me the door.) There had to be at least 35 computers, all with fans running in that room, plus probably just as many rackmounted devices that each had fans of their own, plus a massive air-conditioning system to keep all of that hardware meat-locker cold. (Anytime I’d train a noob who complained about the temperature at which the room was kept, I always pointed out that the equipment is absolutely necessary for broadcasting a signal, but that any of us who didn’t feel like dressing properly could be replaced by the next person to come along who would work for a couple of notches above minimum wage and wear a sweater in the summer.)

So Hadfield’s exactly right when he tells his disbelieving Twitter audience that you get used to it. You do get used to it. Sort of like walking through the old Dixie Cup plant in the ’80s. Now that was loud. They had ear protection waiting right by the door as you walked in and everything.

What’s amazing is that there are spaces aboard the station quiet enough for Hadfield to hide away for a bit and record folk music. In space. Check out everything he has posted – I think the man’s got a career available to him if he ever gives up on the whole being-in-space thing. (As if!)