I’ve been talking for some time about tearing down my man-cave, only for a variety of reasons it hasn’t been happening as fast as I’d like. Today I emptied out, moved, and refilled one of the heaviest, most awkward pieces of furniture in my house, a 6+ foot tall bookshelf that my folks got for me, and my dad built for me, one Christmas in the ’80s. It matched a computer desk and printer table which are no longer with me. It’s still in one piece, reasonably attractive, and it’s damned solid. And yeah, the fact that I remember watching my dad build it while knocking back a beer and cursing a lot has something to do with it. I do the same thing with build-it-yourself furniture, minus the beer (though as I get older, and the printed instructions gradually become more incomprehensible, I have to admit that the temptation is sometimes there).

Sitting on top of this bookshelf, wrapped in an old Pac-Man bedsheet that’s been visible in photos of my game room for nearly a decade, was a large cardboard box that’s been moving from home to home with me since I moved out of the house on North 56th Terrace on fairly short notice. This box has gone to Green Bay, it came back to Fort Smith, and I thought I knew what was in it. I found out today that I was dead wrong. It was a freakin’ treasure chest.

The box was labeled – in my dad’s handwriting – STAR WARS EARL JR.; for some reason I thought it had a single large item in it, and for some reason I thought it was the old Ewok Village playset from Return Of The Jedi. I was a bit bummed to learn that it wasn’t. But there are multitudes of stuff in there that were at least as much of a find, including some stuff that I thought was gone forever as of the great storage unit robbery of 2000. 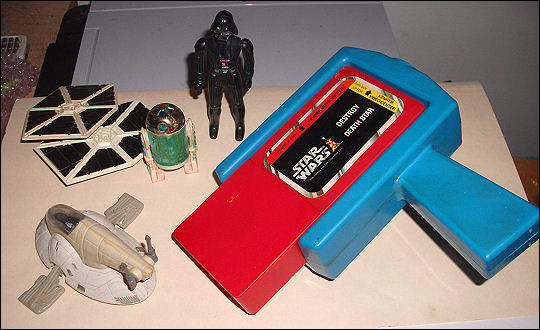 Seen here, from left to right, are vintage Star Wars toys circa 1978-80: Slave I die-cast ship (back when they weren’t tiny little things the size of Hot Wheels), wings from a die-cast TIE fighter (no sign of the cockpit anywhere in the box, though), a strangely redecorated Artoo, Darth Vader, and the Kenner Movie Viewer with a Star Wars film cassette in it. The last of these items was a cool item back in the day: make sure you had light sources pouring in both apertures, hand-crank the film, and watch passages from the movie (minus sound). This was before DVD, before VHS, before the laserdisc release: if you were going to “watch Star Wars” at home, this was how you did it, probably with this record blaring away in the background. 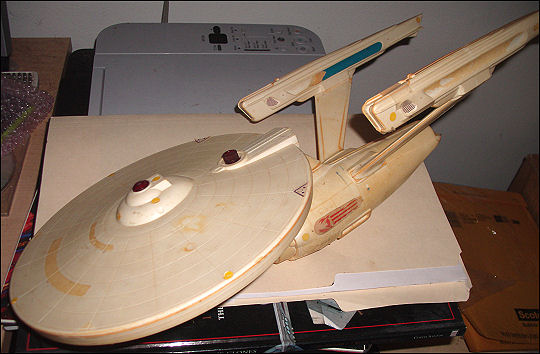 This was a rather large plastic model of the movie Enterprise – still my favorite iteration of the ship – which was tied into the release of Star Trek: The Motion Picture. Now, before you look at the photos and accuse the toymaker of not knowing where the shuttlebay is, let me explain the odd “slots” all over the ship. This Enterprise could be taken apart and reassembled in a variety of forms, including one which eerily anticipated the shape of the Reliant from Star Trek II (which wouldn’t come out for another three years). It has a battery compartment; I don’t know if the lights and sounds still work. It’s obviously not from a smoke-free home, and needs serious cleaning. I thought I had lost this forever. It’s one of my all-time favorite Star Trek items, if for no other reason than the take-it-apart-and-reassemble-it-in-different-shapes aspect of it. I used to fly this thing all over my bedroom. 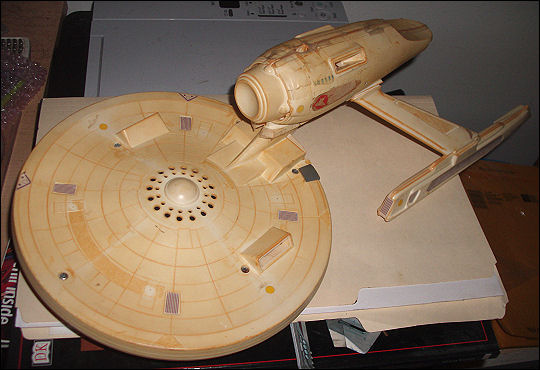 And here are some odd specimens of the ’80s: 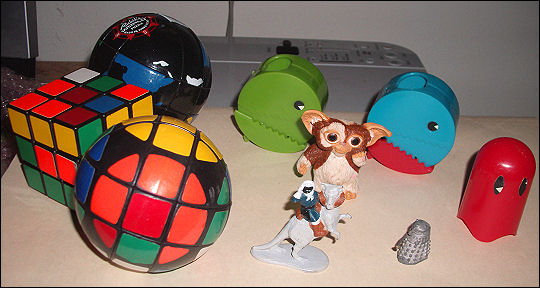 Two Pac-Men and a ghost monster from the Pac-Man board game (no idea where the rest of the game is); original – i.e. not reproduction or re-release – Rubik’s Cube, Rubik’s Globe and Rubik’s World; Gizmo; Han on a Tauntaun from one of the Star Wars Micro world playsets (I found a Chewie, some stormtroopers and a few actual pieces of the various sets after taking this photo); and a 35mm white metal Dalek gaming miniature… 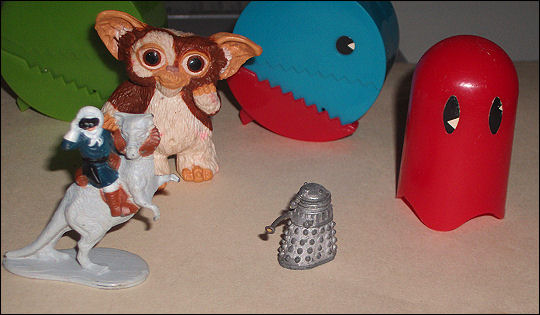 …probably the first Dalek I ever owned. Aside from that one I made for myself using an upside-down Dixie cup and a ping-pong ball, but let’s not talk about that.

I was having a pretty craptastic day earlier today; this find turned it around. The Enterprise especially: that’s my favorite Enterprise toy, ever, and I’ve never spotted one on eBay, and I never expected to see one again, let alone mine.

Darth Vader has been bequeathed to Little E. Just the other day he mentioned wanting “a toy Darth Vader.” I wasn’t expecting to be able to afford one anytime soon, much less an original Kenner figure (I have another one, in a Star Case in my “figure archive,” with cape and lightsaber intact, so giving this to the little guy was not a problem.

It was like talking to myself around the age I first got that Darth Vader too. Someday, buddy… daddy’s gonna share something really cool with you. Just you wait.