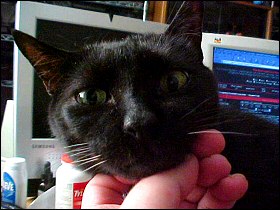 Othello went to the vet this morning, and he’s still there undergoing blood tests. Apparently my quasi-diagnosis of him at least trying to keep water in his system was optomistic; they said he’s actually rather dehydrated. His back legs are practically skin and bone, even the hair is coming off. I’m not sure how I missed this happening, other than being preoccupied with Evan and with OEGE and the usual day-to-day stuff – I’d just cuddle my old cat when he came to me and I didn’t think anything of it, and then about a week ago I picked him up, noticed how skinny his hips seemed all of a sudden, and he had to weigh all of six or seven pounds. I hope this isn’t going to be a case of death by being taken for granted. Othello’s supposed to stick around with me and celebrate his 14th birthday this year. Oberon and Olivia have been moping without him here – either moping or full-bore spazzing around the house. Othello is sort of like the stabilizing adult influence among our little kitty herd (but hey, annoy him enough by batting his face or tail and he’ll throw down with the best of ’em), so I worry about the other two cats too.

OVGE 2008 has been announced officially, so I can stop dropping vague hints. I really hope that some of the folks let down by CGE’s cancellation this year will check this show out – it’s really not a bad alternative for the collectors looking for good deals, and I have yet to go to an OVGE that wasn’t a lot of fun. Brian “icbrkr” Green is likely sitting this one out – i.e. “Warning! A giant battleship FATHERHOOD approaches!” – but you can bet that Flack and I will be there. Maybe we can even talk Ubik into busting out that Altair setup again. Of course I’ll have the PDF DVD with me, and I’m certain the CGE DVD set will be done by then too. (Sooner than that, in fact.)

One thought on “National day of moping”