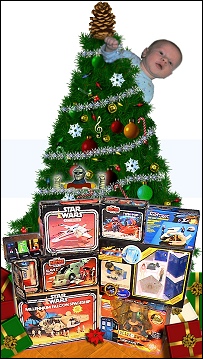 The annual “Christmas tree” is getting to be something of a tradition at theLogBook; basically, it’s a “best of” collection of that year’s Toybox toy reviews and pictorials, all gathered under the tree. As they should be. It’s a very crudely programmed graphical menu that doesn’t really give you any explicit instructions – what you click on is (God and HTML willing) what you’ll see.

In 2006, I assembled the tree and its attendant presents in Paint Shop Pro, as much out of laziness as anything. But this year, I decided to take a different route – I had all of the stuff readily at hand, and one morning I had a little bit of time, so I physically assembled all of this year’s Toybox items – most of them in their original boxes no less! – in one place and took a photo. Compared to last year’s – and a work-in-progress version for this year which was wiped out in a power bump – that’s almost cheating. But I thought it’d be a real statement of geeky cool to actually have all that stuff in one place at one time.

One cheat I’ll admit to: the Voyager and other space probe models were simply too small and spindly to be seen, so I propped up the relevant patches for their missions instead. Also lost in the shuffle may be VINCENT from The Black Hole. See if you can find him – he’s there for a reason. Also a bit sneaky is the dark red gift at the lower right corner – with a Starfleet combadge on it. This is there to visualize something for which there wasn’t a physical package…well, unless I went and found an old 3/4″ broadcast videotape from the ’80s somewhere. This was a bit easier. 😆

If anything was wrong with my first draft of this year’s tree, it was that there was simply not enough going on among the tree’s ornaments themselves. Last year’s tree had a couple of things snuck in among the ornaments, so literally two days out, I added a couple of extra goodies – namely, the baby and Jet Jaguar (!). If these look like cheesily-pasted-on late additions…that’s because they were!

Anyway, hopefully everyone enjoyed this year’s tree. Now that I’ve got a kid who, in theory, should be taking up almost all of the household toy-buying budget instead of his dad, I’m not sure how the tree idea will play out in the future. But then again…I’ve still got a few trinkets here and there that I’ve been holding back on.

Voyages Of Shelf-Discovery 3.2: Graham and a bunch of Daleks
YouTube Video UCQhbcY-vixBkryMO0UMZ5UQ_3z9clPKKmys