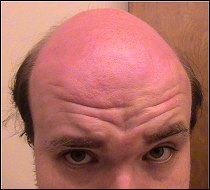 Yep, that’s me over there. Tomato Boy. Mr. Burns. From bald to redhead in just hours. Today wasn’t exactly a stellar day in my world – unless you happened to be a big honkin’ yellow star hanging over my head, then you definitely got to have your fun with me. One of these days I’m going to remember that there are these things called hats, and I actually own a decent number of them. I’m not talking baseball caps – hats. For someone who’s as big a fan of hats as I am, you’d think that I’d actually wear ’em outside on these occasions when I’m just going to step outside and trim the hedge in front of the game room window.

But wait! There’s more. Among my other staggering non-accomplishments today:

This was definitely one of those days when I should’ve just stayed in bed with kittens on my head.

One thought on “IT BURRRRRRRNNNNSSSS”