The recent photo organization project inspired me to finally get around to doing something I’ve been threatening to do for year – create a family portrait out of pictures where no two animals were in the same place at the same time. Here are the results: 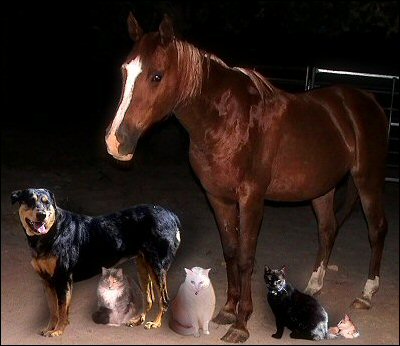 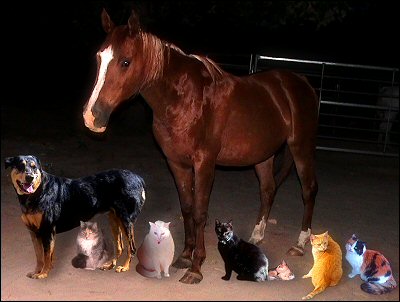 I don’t know who in the heck would want wallpaper of my pets, but I sure do, so I’m leaving it here, more or less for myself. Obviously, it’s not a perfect job of compositing everyone together, and even more obviously, the version with fewer critters is just a better fit. I tried to finesse things a bit, getting rid of rough edges and hiding the joins, and even tried to throw a false shadow behind everyone to give it some slight semblance of reality. The problem lies in the disparate sources of the images, and the radically different lighting that’s on…well…frankly, everybody. Sultry’s picture was taken at dusk with a flash; Othello and Xena (the two who come closest to matching) were shot in full outdoor sunlight with light overhead and slightly to the right relative to each frame; Chloe and Olivia were obviously shot indoors with a flash in front of them, and Iago was shot indoors, but in direct sunlight. (In the second version, it’s even worse – Sampson was shot in outdoor lighting on a cloudy day, but with the lighting above and to the left, and Gabby looks like her picture was taken in the evening before the sunset, but with the sun low enough that she had a blue tint.) Also, the shots of Iago, Gabby and Sampson all came from a camera that took pictures at a lower resolution than the one that took everyone else’s picture.

After doing some manual fine-tuning, I then re-“glared” the picture a bit, for a slight soft focus look and to brighten/even the lighting a bit. This worked much better in the picture without Sampson and Gabby – the glared version of the “all paws on deck” photo gives Sampson an unnatural glow (and inadvertently draws the eye straight to him before anyone else) and heightens Gabby’s blue glow. I gave thought very briefly to “ghosting” the ones who are no longer with us, but that thought got a little depressing when it would’ve meant “ghosting” half of the cats in any given shot. Chloe never met Olivia, and Iago never met Olivia, Xena, Sampson or Gabby, and Olivia didn’t meet Sampson or Gabby either.

Conceptually, though, I like it – I saved all of my layers and elements to see if I can do a better job of it later. Heck, I may get goofy and make the cats as big as the horse, you never know. (And before you say it – there are about three horses missing for a true family portrait. I was just taking advantage of one of the pictures I took after Sultry was brushed and groomed a few weeks ago.) I love the little bit of image manipulation that has Olivia holding onto Othello’s tail with her paws (something she actually does quite a lot of). I think I got everyone proportioned correctly – if anything, Othello and Olivia are perhaps a smidge too small (look at the size of Othello’s head compared to Chloe and Iago – sure, Iago was a big cat – but he’s also a little hunched in that picture).

2 thoughts on “A family portrait.”