I’m pretty much drained after a weekend of waiting for more little horse hooves to hit the ground and other work on the farm, and just not getting a whole lot of sleep in general. I don’t mind helping out on the farm, but I’m not 21 years old anymore and I can’t just change my sleep schedule on a dime. Invariably, I wind up more exhausted and unhappy at the end of a weekend than I do going into the weekend. I almost dread Fridays. But I don’t suppose this’ll matter to anyone until I fall asleep at the wheel, roll my car, and everyone suddenly has to find just the right trained chimpanzees to take up the various chores I have at home, at the farm and at work. Then someday they’ll look back and say, “Wow, y’know, that Earl was a cranky bastard…but at least he didn’t fling his own poop all over the place.”

Bah, they just never found where I was flinging mine.

Anyway, here’s something to cheer us all up: cute Easter critter pictures! 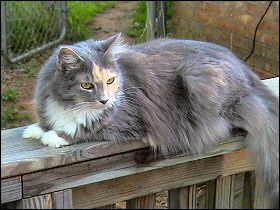 Chloe perches herself on the railing of the deck… 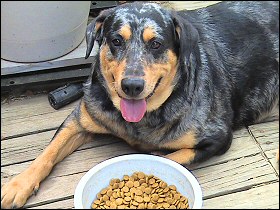 …so she can watch Xena lay down and chow down.

She’s probably also keeping a wary eye on Othello, who is also out and about and on the deck railing…

…and deciding that the kitchen window should be his own personal entryway to get back into the house.

HELLO IN THERE! OPEN UP!!

He’s just going to sit on that window ledge until someone opens the window to let him in.

Finally Othello gives up on the window idea and finds a safer perch.

8-ball in the corner pocket. 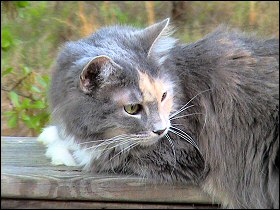 Another Chloe beauty shot – these are pretty easy, all you need is Chloe and a camera.