Now here’s a pet pairing that I don’t think I’ve had a chance to photograph in years. In the upper left hand corner is Chloe, snoozing on our antique Duncan Phyfe sofa, while Othello, snoozing on a comforter on our other sofa, is awakened by me taking pictures. (Ignore the clutter in the rest of the room if you can.) I’m surprised Othello is in as good a mood as he’s in – he’s got every right to hate my guts tonight.

I let him outside to do a little bit of roaming in the yard, something that usually takes him about 10-15 minutes to get his fill and come back in. He was outside slightly longer this time, and then other stuff came up – my wife and I made dinner (on the last night of my vacation – both of us being at home and awake at the same time is a true rarity), played some computer games, and got a call from my niece, who was wanting to know all about tornadoes. (Good thing she doesn’t read my blog, she’d be scared to death!) Before I knew it, two hours had passed and not a single cat fight in that time…and then it hit me. Othello was still outside and it was now after dark. And since we live in the country, that meant anything could be out to get him. And probably not the kind of anything that’s had shots. 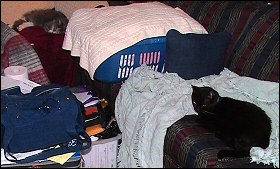 I went outside and called for him, and there he was, safe and sound – Xena was staying close to him and looking after him. Now that is a good dog. And I’m a terrible kitty daddy. I can’t believe I did that to the poor little guy. Ever since he came back in, me taking pictures notwithstanding, he’s been sleeping the sleep of the dead. I’m sure he was pretty nervous, because he’s not an outside cat. While he was outside, one could hear other dogs barking and we even heard a hawk. Anything could’ve gotten Othello and I never would’ve seen him again. I think it’s time to lay on the extra cat treats until the guilt trip wears off.

Anyway, that’s my story for tonight. And now for some pictures of Chloe doing what she does best – sleeping anywhere, at any time, through anything. 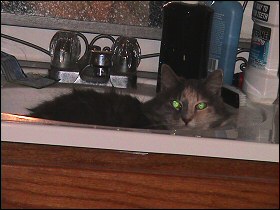 …at least until I wake her up to take pictures. 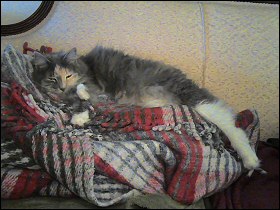